As temperatures drop, fears rise they could be left out in cold 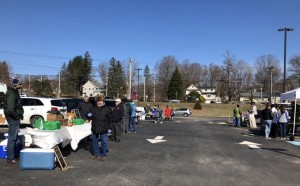 When Covid-19 struck New Hampshire for the first time in March, the Salem Farmers Market didn’t miss a beat.

“We did not have a lapse, we just jumped right in. We were very active while being very strict on rules that customers, vendors and staff had to follow,” said Bonnie Wright, president of the Salem market.

Some vendors even did better than ever before, “especially at the beginning when there was a concern about meat shortage, our meat vendors did fantastic,” Wright said. Although the market had reduced from its normal four hours down to two, some vendors were making record sales.

But as New Hampshire weather is already beginning to show the first signs of fall, winter farmers markets – most of which would have already had a plan for winter by this time in a normal year – are facing an uncertain future, especially since schools are common venues.

“We are scurrying like crazy trying to find a venue for our market,” Wright said.

The Salem market is usually held from November until March at Fisk Elementary School. But with the district’s students now back at school five days per week, the school is not allowing non-essential guests to enter the building, meaning the farmers market needs to find a new venue.

“The problem is finding a location … that would be big enough for us, enough parking space for us, and enough for people to be safe in it,” Wright said. They’ve had no luck yet. One venue offered to host them for $8,000 per year, which wasn’t affordable for the organization.

Williams’ greenhouse services local restaurants and markets as well, but he said 90% of sales take place at farmers markets. He said customers can also pick up produce at their farm stand. “It would be disastrous for us if there was no indoor market this winter.”

If there are no winter farmers markets, there also could be implications for those receiving SNAP food stamp benefits who can access local food at farmers markets.

“It was much easier when things were outdoors,” said Brendan Cornwell, who coordinates the Granite State Market Match program for the New Hampshire Food Bank. “We have some possibilities to get some local food to people on SNAP, but it’s hard because a lot of the easier ways to get local food are through delivery services. And with SNAP the government doesn’t let you order online with your SNAP card unless you happen to be Amazon or Walmart.”

Farmers markets organizers are still looking for ways they can remain open and service their communities.

“We’re looking to possibly expand some of our mobile markets in the winter to get food into some food deserts, but we’re still hoping that farmers markets are still going to exist in some way over the winter,” said Shawn Menard, program director of Seacoast Eat Local.

Seacoast Eat Local, which for the past 10 years has hosted winter farmers markets on the Seacoast, still has plans to host at its regular venues – Greenhouses in Rollinsford and Exeter High School. But its leaders are expecting to have to limit capacity to 50% to comply with state guidelines, which is projected to greatly reduce the number of regular customers.

“Our attendance, depending on the venue and market location, or market date, can be anywhere from 1,200 to 2,500 people across 12 hours,” Menard said. “When you think about that in the context of Covid, it’s hard to think about what that would look like on many fronts.”

It could also mean having to reduce the number of vendors by 20% to 30%, Menard said, which could be a problem for less tech-savvy small businesses.

The organization is envisioning time slot reservations, a limited number of people per household who can attend markets, and offering pre-order services.

“It’s kind of hard to have something like this that’s been so consistent year in and year out whereas now we’re kind of having to reinvent the whole thing,” Menard said.

Looking back on the spring, the Salem Farmers Market found some successful alternatives.

Starting in March, open market hours were shortened and have remained. The market was taken outside a little early; it’s usually held indoors until the end of March.

“We had a market when it was 37 degrees out. So we cut the hours down to two hours. Because everything has been so topsy-turvy, we’ve kept it at two hours. Depending on what we end up having to do, it may stay at two hours or possibly go to three,” Wright said, adding that some vendors “probably would not have survived this winter if we hadn’t kept the market going.”

Wright said organizers are determined to find a way to open again this winter. And that may mean looking to keep the market outside even as temperatures continue to drop, should they not find a suitable and affordable venue in time, she said.