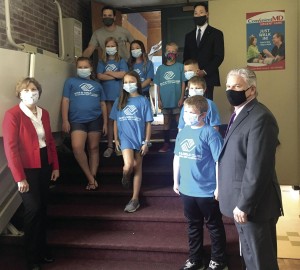 Childcare centers were financially vulnerable even before the Covid-19 pandemic reduced attendance and made it harder to find qualified employees, U.S. Sen. Jeanne Shaheen was told during a visit to the Boys & Girls Club of the Lakes Region.

Shaheen, who visited the facility on Tuesday, said she was supporting an effort in Congress to include significant funding for child care in the next round of emergency relief.

Chris Emond, the club’s CEO, urged Shaheen to emphasize that when funds are provided, there shouldn’t be a requirement that centers must spend the money by the end of the year.

“This is not going to go away anytime soon,” he said. “This could be a year and a half to two years.”

Tracy Pond, program manager of Child Care Aware of New Hampshire, told the senator the challenges of running a childcare center can be seen in the price of simple items at a grocery store.

The childcare sector, unlike other industries, has limited ability to pass along increased costs. Many parents are already finding it difficult to pay existing rates.

Jim Holmes, site director of the local club, said some of the children who normally participate in its programs have not been coming.

Many times a teacher, coach or childcare worker may be the first person to report abuse or other problems involving young people, so it’s a concern when these children are out of school or out of after-school programs, Holmes said.

He also has been having trouble finding adequate staff.

“That’s actually been one of the biggest challenges this summer,” Holmes said. “We have the physical space to have one more room of nine kids but haven’t been able to find qualified staff members to fill that role.”

The children who have been attending were apprehensive at first but have adjusted to the new protocols, he said.

Those who attended Shaheen’s roundtable discussion had their temperature taken and were asked screening questions.

Mayor Andrew Hosmer told Shaheen that with all the problems associated with the pandemic, there have also been some positives.

“What I’ve heard from people, and my wife brings this up, is that we are connecting with our kids in a way we weren’t connecting previously,” he said.

He and his wife work full time and have four teenagers.

“Now that we’re working from home, it has allowed us to reconnect and reprioritize and redefine what work is and how we approach work,” he said.

Shaheen said another positive development is the growing recognition from employers that employees can be just as productive from home as they were when they were commuting to the office.

“I’ve talked to a number of employers who are recognizing that working remotely provides parents more flexibility and is actually more productive than they expected,” she said.

“You don’t need to take a sick leave day or holiday day if you have to take your child to the doctor. You can work at home that day and still get your work done and do what you need to do.”