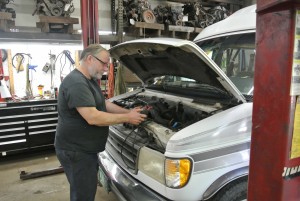 Pate Leary checks on the antilock braking system on a van brought in to Dave’s Automotive in Marlborough. (Photo by Damien Fisher)

Things have been busier than ever at Dave’s Automotive in Marlborough, the family-run car repair shop and salvage yard.

“We are so buried with work it’s ridiculous,” Michelle Ferranti said. “Cars still gotta run, they’ve got to get us someplace even if they don’t have to get us to work everyday.”

Among the many changes to everyday life brought on by the coronavirus pandemic was the temporary waiver for New Hampshire drivers to register their cars. Paul Raymond of the New Hampshire Department of Safety said because the state had to close down public access to Department of Motor Vehicles offices, the state did not want to punish drivers.

“We tried to make it as easy as possible to extend registrations, licenses and 20-day plates,” Raymond said.

Drivers of any cars that had to be registered for renewal or for a new purchase were given until May 31 to have the paperwork done. Temporary plates put on most cars after they are purchased were automatically given an extra 20 days, and drivers who needed renewed licenses were also given extra time, he said.

Though police have been using discretion about registration and licensing issues, safety inspection sticker violations are still being enforced, Raymond said.

The Granite State News Collaborative submitted questions to the DMV seeking detailed information about the number of registrations completed this year compared to last year. DMV officials said they were working on the request but did not have numbers available as of press time.

New Hampshire residents are supposed to get their annual safety inspection at the same time as registration renewal, but the lack of required inspections has not meant a lack of work at Dave’s Automotive.

Ferranti runs the business along with her sister, Kelly Knight, and their father, Dave Knight. Kelly Knight said people have been dropping off their cars to get long-delayed work done.

“Now they have time to get the work done, because they’re all working from home,” Kelly Knight said.

The slowdown in registrations hasn’t turned into a major dip in revenue for the town of Marlborough, said Town Administrator Ellen Smith.

The town clerk’s office has been busier than ever, said Smith, as Town Clerk Ellen Orkin and her assistant have been taking appointments. Marlborough brings in about $400,000 a year in revenue from motor vehicle registrations.

Scott Myers, Laconia’s city manager, said the city clerk’s staff have been busy as well, directing people to online options to get their cars registered, and even going out and offering curbside service for some older residents.

Myers said the temporary waiver for registrations has had a noticeable impact on his budget. Despite the online options to get cars registers, many people have held off, he said.

“By the end of May, we were down about 200 vehicles based on last year’s pace,” Myers said. “I think we’ll get caught up when people get around to doing it.”

Those delays have totaled about $100,000 in revenue for the city. While people will get their cars registered, mostly this month, Myers suspects not all of the projected revenues for the year will come in. The city is on track for about $2.9 million in registration revenue, which Myers thinks will hold.

“Ultimately, at the end of the day, everybody needs to have a registered vehicle,” Myers said.

Laconia had previously anticipated a slight rise in car registration revenue based on people trading up their cars. Myers suspects many people are holding off on buying new cars with the uncertain economy and record high unemployment.

“The city brings in a considerable amount of money off vehicle registration,” Donchess said. “We expect it to be off from what we had hoped, but we’re not sure how much.”

Like Myers, Donchess wasn’t sure how many people are skipping trading in their car while the economy recovers.

Ferranti doesn’t think people are necessarily holding on to their cars longer, and she is seeing a lot of new purchases.

“A lot of folks are trying to maintain their cars better at the get-go, but folks are tired of trying to fix stuff. Some new cars are awfully cheap,” she said.