N.H. exports on the slight upswing

They edged up by 0.5% in May amid continued signs of some progress

With a low value of the dollar, goods made in New Hampshire's factories cost less to foreigners, and thus become more affordable and more attractive overseas. As a result, foreign demand for American goods increases which leads to higher company sales, more profits and additional local jobs tied to exports. 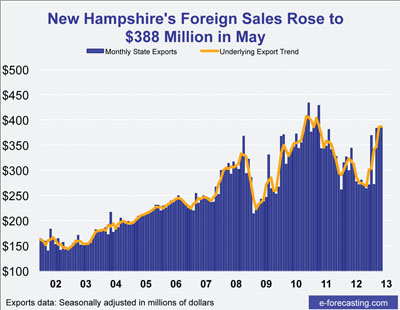 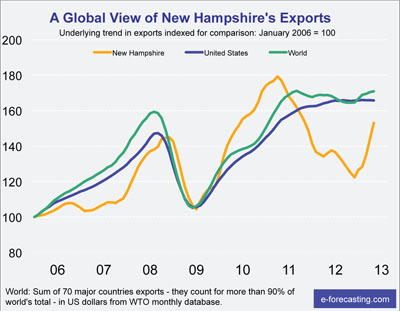 But over the last 24 months, the value of the dollar has increased 14 percent against a basket of currencies of major trading countries, and this has begun to have adverse effects on the foreign demand for U.S. goods.

Since August 2011, the euro has lost 11 percent of its value against the dollar. Similarly, the Canadian dollar and the British pound lost 7 percent and 9 percent, respectively. Hence, buyers from these two important foreign markets for New Hampshire's exporting companies now find prices of American goods to have substantially increased.

Very surprisingly, since August 2011 the Japanese yen has lost nearly one-third of its value against the dollar. That makes American goods 31 percent more expensive for Japanese buyers. Conversely, Japanese products – like cars – are now 31 percent cheaper for American buyers.

The latest result is that exports of goods made in New Hampshire edged up in May by 0.5 percent, after an increase by 0.7 percent in April. New Hampshire's exporting companies sold $387.7 million in goods in May. Year over year, however, New Hampshire exporters surpassed their performance in May 2012 by $44.1 million, or 12.8 percent.

Exports from New Hampshire's manufacturers accounted for 62 percent of all exports and fell to $240.9 million, 1.1 percent lower than in April.

Exports of non-manufactured goods rose 3.2 percent in May to $146.9 million. This group of foreign sales consists of agricultural goods, mining products and re-exports, which are foreign goods that entered the state as imports and are exported in substantially the same condition as when imported.

Nationally, U.S. exports fell by 0.7 percent in May to $130.3 billion. So far this year, national exports of goods edged up slightly by an annual rate of 0.7 percent from the same period a year ago.

Evangelos Simos, chief economist of the consulting and research firm e-forecasting.com, is the Journal of Business Forecasting’s editor for international affairs and professor of economics at the UNH Whittemore School of Business & Economics. He may be reached at eosimos@e-forecasting.com.