As the pandemic hampers attendance, most offer digital content to compensate 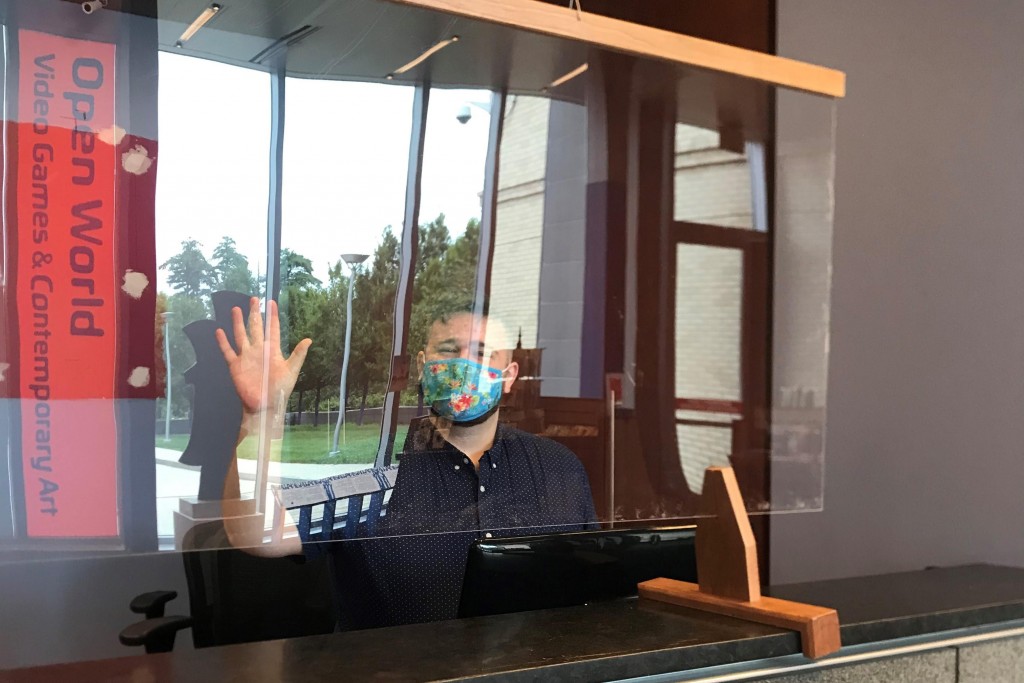 To stop the spread of the coronavirus, museums, like many other cultural institutions, extinguished the lights in mid-March. Some in New Hampshire opened cautiously in July, with limitations.

Meanwhile, behind the scenes, curators and educators are ramping up programs to keep members and visitors engaged online and soften the financial blow from the pandemic’s blunt arrival.

Shortly before the Currier Museum in Manchester closed, it was about to launch a large-scale, immersive exhibit demonstrating how video game cultures influenced contemporary art methods.

Without knowing when visitors could witness the exhibit in person, curator Samantha Cataldo quickly put together videos on the website and social media detailing the artwork, delving into the mechanics behind each piece. In one recording, Cataldo describes how Ueli Alder’s inkjet print of a detonation blends digital composites

“The digital experience allows us to zoom in on works and, in some cases, give an enhanced viewing experience that one couldn’t really have in a gallery full of people,” says Cataldo.

Five months later, on Aug. 20, the “Open World: Video Games and Contemporary Art“ exhibit and others will open to the public with timed ticketing, face mask requirements and hand sanitizers throughout the two floors.

Visitors will use their smartphones to listen to guided tours or hear more details about a particular piece. Its labels are also larger so people can read from a greater distance.

“Flexibility has been the byword for a lot of folks,” says New England Museum Association director Dan Yaeger. After spending a couple of months navigating the logistics of crowd control, many are also bracing for a potential spike in the virus and a re-closing. “There’s a sense of tentativeness.”

Currier artist-in-residence Larissa Fassler, who resides in Berlin, Germany, spent last summer living in and studying Manchester’s downtown landscape to create large-scale drawings, maps and text annotations that project how the city’s architecture influences peoples’ behaviors. Her goal was to return this summer and explain her observations of New Hampshire’s largest city while showcasing the work she created here.

Despite the indefinite postponement of Fassler’s return, Cataldo teased interest in the artist’s project through a virtual talk in July with Fassler, in which 50 participants joined live on Zoom and another 50 on Facebook.

Virtual talks proffer upsides, says Cataldo. “We can have a much larger audience than what we have capacity for within the museum. Plus, people can tune in from anywhere.”

In one video, youth program manager Sarah Coulter reads a book about letting your mistaken spills and tears create goofy animals; she ends the clip by asking kids to tune in the next day for a splatter painting exercise. To date, around 100 students have participated.

After museums closed on the infamous Friday the 13th of March, many augmented the remote learning in the schools, says Yaeger, and most will continue to expand their website content.

While museum staffs are leaning into digital media, Yaeger says, “some have gone very analog in their search for revenue streams.”

He cites the Remick Country Doctor Museum in Tamworth, which no longer offers tours of its Captain Enoch Remick House, but instead encourages visitors to stroll its vegetable and herb gardens and watch its farm animals graze in the pastures for a pay-what-you-wish admission fee. 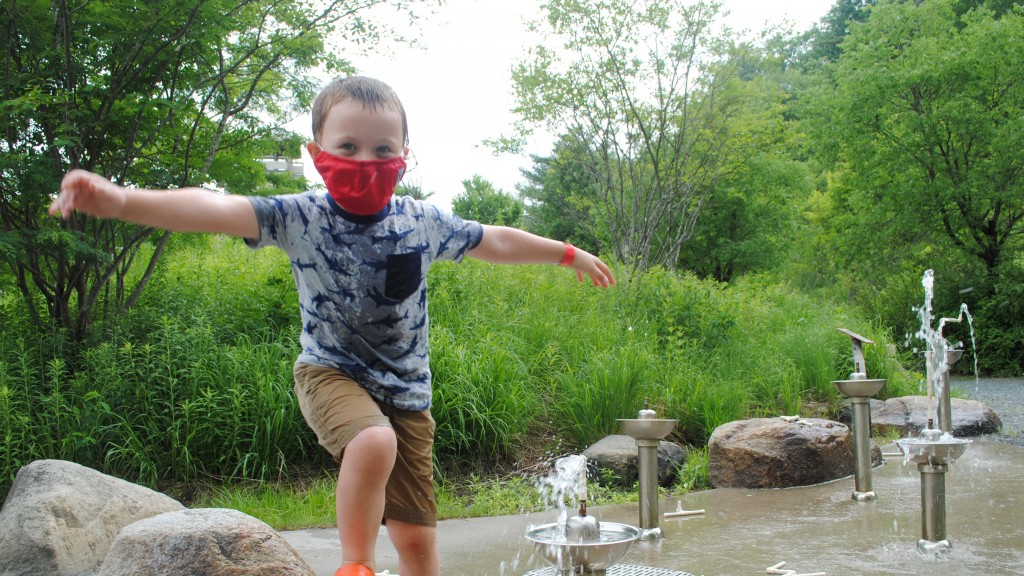 The Montshire Museum in Norwich, Vt., has been operating exclusively outside since July.

Education geared towards pre- and school-aged children sits at the cornerstone of the Montshire Museum of Science in Norwich, Vt.

Since the pandemic forced schools to shut down in New Hampshire and Vermont’s Upper Valley, the Montshire staff produced more than 60 videos, many with teacher guides, says museum director Marcos Stafne. The Montshire also joined the recently formed collaborative portal, foursciencevt.org, to offer content for educators and families.

The Montshire, situated on 110 acres, has been operating exclusively outside since July. Visitors reserve their tickets online for morning or afternoon sessions. In addition to its science park, the museum moved its “bubbles” exhibit outdoors, letting families experiment with soap and water in a setting that’s not entirely contactless, but is more conducive to social distancing. The museum invested in hand-washing stations outside and touch-free soap and towel dispensers in the restrooms, which are now gender neutral and accommodate family units.

The number of visitors has shrunk to an eighth of typical attendance, Stafne says. “It’ll grow as people become more comfortable going into spaces and knowing that we’re very safe, but it’s not going to recover for a while.”

Admissions and membership fees nourish up to 60% of operating expenses. “It is tough. It’s very tough,” says Stafne.

The Children’s Museum of New Hampshire in Dover receives “a good chunk” of its revenues from admission tickets, according to spokesperson Neva Cole. As a museum that touts touch and play, its decision to remain temporarily closed was a “no-brainer,” says Cole.

Screen-free summer museum kits with supplies and instructions ranging from $85 to $100 offset the lack of a real-time summer camp.

“They [the kits] have been pretty popular, and we just finished selling our last set,” says Cole.

CMNH also distributes literature and science kits with video links to local libraries free of charge so its patrons can participate in its “Engineer a Fairy Tale” activities.

To funnel dollars into its coffers, CMNH relies on annual galas, such as the car or cash raffle and the New Hampshire Maker and Food Fest, which it postponed into digital modes. Fortunately, says Cole, “that didn’t really faze our business sponsors.” As with other museums, the museum benefits from private donors, foundations and grants.

The museum has no immediate plans to reopen.

Since the pandemic’s onslaught, Yaeger says he’s seen a surprising uptick in private philanthropy. In addition, grants once targeted for specific projects have been modified to support operating expenses.

He says a museum’s viability rides on the generosity of its community.

A survey from the Association of Fundraising Professionals members is less sanguine. Conducted in May, it concluded that more than half of charities expect donations to dip this year compared to those in 2019, further plummeting by 2021.

Those predictions spell trouble for museums. Without financial reserves, one-third of museums may close permanently due to the Covid-19 crisis, according to a press release the American Alliance of Museums published on July 22. The research was based on a survey of more than 750 museum directors conducted by Dynamic Benchmarking of Windham, NH.

“Museum revenue disappeared overnight when the pandemic closed all cultural institutions, and sadly, many will never recover,” said Laura Lott, president and CEO of AAM.

Money from the Paycheck Protection Program as part of the federal CARES Act lent a stopgap to protect against museum workforce layoffs.

According to a July report from the New England Museum Association, museums garnered between 0.14% and 0.29% of PPP funds. In New Hampshire, museums received between 0.07% and 0.12% of the state’s PPP funds, trailing other New England states in loan dollars compared to its population.

Museum directors will need to rally for federal and state funding while campaigning for private donors to avoid their demise.
As individuals trudge through a pandemic-induced recession, they look for ways to curb feelings of isolation, says Currier Museum spokesperson Tiffany Eddy.

“During challenging or uncertain times, museums bring people together to share beauty, have conversations of value and stay connected.”

'A powerful way for Granite Staters to come together': NH Gives returns for another 24-hour online fundraiser