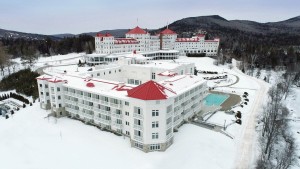 A $25 million addition and renovation project was recently completed by PC Construction at the Omni Mount Washington Resort in Bretton Woods.

The project, which was designed by Bull Stockwell Allen, added a 60,000-square-foot, four-story facility with 69 guestrooms, a club lounge, a courtyard spa garden and a poolside grille to the resort’s existing 200-room footprint. The South Burlington, Vt.-based PC Construction also completed a kitchen upgrade and extensive roof improvements, including a new rooftop terrace.

The original hotel was designed by 19th century architect Charles Alling Gifford, and construction was completed in 1902. It earned a notable place in world history as the site of the 1944 Bretton Woods Monetary Conference. In more recent history, this National Historic Landmark – one of the last grand hotels in the White Mountains – has become a favorite retreat of presidents, poets and celebrities.

The new wing – called the Presidential Wing – “has elevated the level of accommodations and amenities we’re able to offer,” said Josh DeBottis, general manager of the resort.