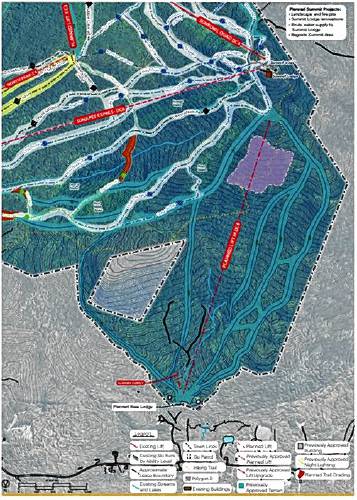 Vail Resorts, operator of the Mount Sunapee Ski Area, is reviving a long-debated expansion of the West Bowl of the area with a mile-long chairlift, new lodge, a new beginner area and five new intermediate runs, from low intermediate to advanced.

The Concord Monitor reported that the plan is included in Vail’s five-year plan which is required by the state of New Hampshire, owner of the 986-site.

The master plan says that if all of its recommendations are built, the area’s “comfortable carrying capacity” would expand by about two-fifths, from the current 4,820 skiers to 6,850.

The question of whether Mount Sunapee should expand has long been controversial. Proponents describe it as necessary for the continued operation of the largest ski area in southern New Hampshire and tout what they say will be economic benefits of the expansion, while opponents criticize its environmental and financial implications.

In 2016 the Executive Council approved first iteration of the plan but Mount Sunapee’s previous operators, Tim and Diane Mueller, didn’t proceed with it.

The Executive Council approved the plan again in 2018 after Vail acquired the resort form the Muellers.

But approval is still required by the Department of Natural and Cultural Resources. The agency will hold a public hearingbeginning at 5 p.m. Thursday, Nov. 5, on the expansion plan – official part of the Five-

The organization Friends of Mount Sunapee, longtime opponent of the proposal, is criticizing the plan again, particularly because it said in a statement that the projects “would adversely impact Mount Sunapee’s unique 484 acre Exemplary Forest which includes ancient forest,” which they claim is the only forested system of its type in the state.