Company has high hopes for its latest networking products 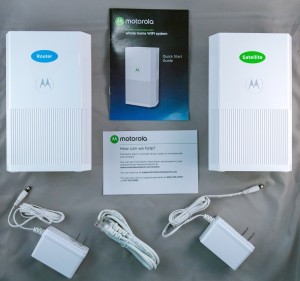 Minim expects holiday sales to be strong for its Motorola-branded mesh systems.

It’s beginning to look a lot like a Wi-Fi Christmas. At least that is what Manchester-based Minim is hoping as it launches several new router mesh and gateway products for the home that uses connectivity for everything from gaming to the home business.

The company reported quarterly sales were up 25 percent year over year, to $15 million, for its routers and other home networking products. But some expenses are going up even more, so – thanks to supply chain and inflationary issues – the only way Minim was able to squeeze out a $1.8 million profit was though the sale of its Zoom trademark for nearly $4 million.

That’s not the Zoom you’ve been using for meetings since the pandemic broke. That’s sold by Zoom Video Communications Inc. Minim, was formerly Zoom Telephonic, and after its merger with Zoom Connectivity, which became its subsidiary, finally became Minim.

But considering that the global smart home market is expected to reach $314 billion over the next four years, the company is hoping for a payoff soon, if strong holiday electronic sales fuel a desire for stronger and smarter Wi-Fi connectivity.

The company has particularly high hopes for its Motorola mesh product, which doesn’t just consist of a modem and router, but nodes placed strategically through the house. Its 7600 mesh system became available on Amazon in October. There are competitors of course but the company has been able to raise enough cash to get enough chips to build enough product.

“We are excited for what’s expected to be a strong holiday season,” said Nicole Zheng, president and chief marketing officer. “A season where ‘inventory is king’ and shoppers are looking for incredible value in hardware/software combination products.”

In addition to the trademark sale, Mimim raised $22.7 million in a secondary public offering in August, a month after it went public in July. As a result, the company had nearly $19 million in cash in Sept. 30, as opposed to $772,000 at the beginning of the year, and it’s assets nearly doubled to $56 million.

The company also settled “two nuisance value lawsuits.” according to SEO Sean Doherty, both involving shareholders challenging the company’s founding and controlling owners, Jeremy and Elizabeth Hitchcock. Jeremy Hitchcock was founder of Dyn which was sold to Oracle before that tech giant shut it down. They were more litigation threats than lawsuits. One shareholder complained in February that minority shareholders were shortchanged in the Zoom Connectivity merger. That suit was settled in August for $225,000.

And in June, shareholders complained there was misconduct in the authorization to increase sales for a public offering, but that was resolved on Sept. 30.