Amber MacQuarrie, a single mother of two from Dublin, was running an infant day care when she started experiencing extreme lung pain in 2018.

After running tests, doctors concluded that the pain was caused by a cyst the size of a fist and she required heart surgery. When her daughter Olive became ill, she discovered that they both had Ehlers Danlos syndrome, a genetic condition. Her daughter went from being physically active to needing arm crutches to walk. And her son was diagnosed with ADHD.

If it weren’t for the Medicaid expansion program, she wouldn’t have had the money to get the surgery and support her children’s needs as a self-employed individual, she said.

“Medicaid expansion is a significant driving force behind my family’s ability to navigate our life by providing me with the health care services I need,” said MacQuarrie, fighting back tears.

Alongside MacQuarrie, New Hampshire’s healthcare professionals, advocates and Medicaid recipients pushed the state to reauthorize the Medicaid expansion, which is set to expire at the end of this year, at a Jan. 4 press conference in the Legislative Office Building in Concord.

The prospect of whether or not legislators would reauthorize expansion in the next legislative session is daunting for lower-income residents like MacQuarrie who rely on it. The program is especially valuable to those who use it for mental health care and counseling, which otherwise would be unaffordable. 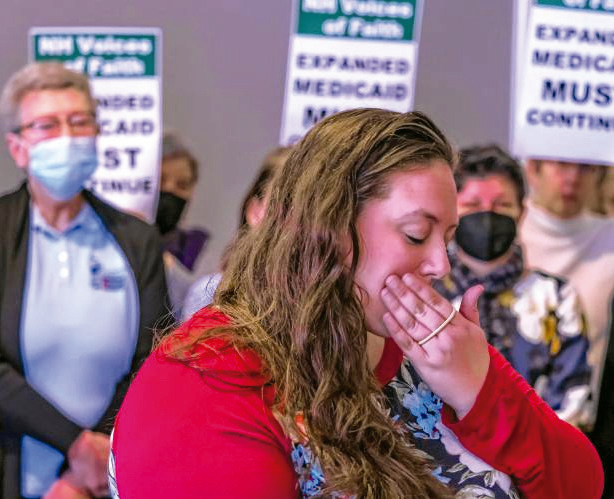 Amber MacQuarrie, a 35-year-old single mother of two from Dublin, gets emotional while speaking in favor of the reauthorization of Medicaid expansion in 2023 at a Jan. 4 news conference at the Legislative Office Building in Concord. (Geoff Forester/Concord Monitor)

The program is credited with lowering the number of uninsured residents in the state, with better access to healthcare and early detection of diseases. Prior to Medicaid expansion, non-disabled persons under the age of 65 were almost never eligible for Medicaid unless they had minor children.

For MacQuarrie, the expansion has given her financial respite by covering the costs of her family’s medical needs.

“Please don’t make things harder for my family and the thousands of others just like us,” she said. “I along with my kids deserve to have our medical needs met, no matter what they are.”

Through the Medicaid expansion program, more than 27,000 people received treatment for mental health conditions and substance use disorders in 2021, and over 800 people accessed inpatient hospitalization services with the expansion. Without insurance to cover mental health care, oftentimes individuals end up living on the streets, mental health experts said. 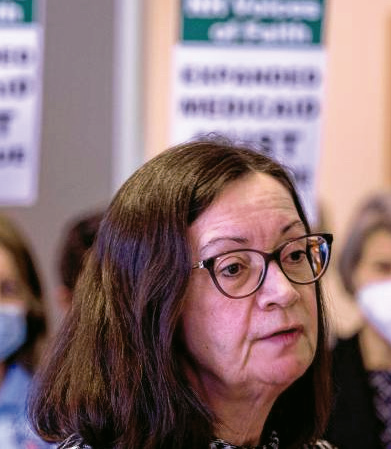 Susan Stearns, executive director of the state chapter of the National Alliance on Mental Illness, said reauthorizing Medicaid expansion is critical in early diagnosis and intervention of a mental illness.

“For someone who is showing early signs of a serious mental illness or an early episode of psychosis, something like Medicaid expansion is critical to helping them access early health care,” Stearns said.

As a mother of a child with a mental illness, the reauthorization of the program hits Stearns close to home.

She described the program as her safety net, and she, like other parents, worries about her child’s access to healthcare in the future.

Not only does the program affect healthcare, it also plays a vital role for New Hampshire’s economy and workforce. Medicaid expansion is the Business and Industry Association’s top legislative priority, said David Juvet, the Association’s vice president of advocacy, because a healthy workforce is critical for the state’s rapidly growing economy.

“It’s not only the smart thing to do for New Hampshire, but it’s also the right thing,” said Juvet. “By not expanding and reauthorizing this program, the result will be removing insurance from 50,000 to 70,000 people’s lives.”

At the press conference, Kris McCracken, president of Amoskeag Health, Lisa Madden, president of Riverbend Community Mental Health, and Keith Kuenning, advocacy attorney at Waypoint, all urged legislators to reauthorize Medicaid expansion, saying that one out of every five Granite Staters depend on it.