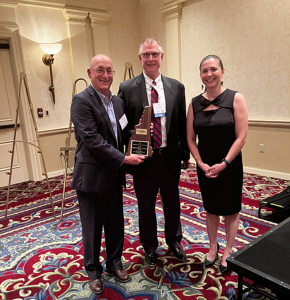 Dick Jennings, managing director of Mascoma Community Development at Mascoma Bank, has been named the 2022 Community Banker of the Year by the NH Bankers Association.

NH Bankers Association President Kristy Merrill said Jennings’s career “is a reflection of his values that civic and community engagement go hand-in-hand with what he does every day as a commercial lender, leveraging both public and private resources to benefit an entire community. Dick exemplifies the spirit of the Community Banker of the Year, and we congratulate him and thank him for his service,” said Kristy Merrill.

In presenting the honor, Jennings was cited for having dedicated his career to promoting and financing affordable housing projects through public Low Income Housing Tax Credit Program. He also has become a regional expert in the federal the New Market Tax Credits program.

Under his leadership, Mascoma Community Development, a community development entity established in 2013 as a wholly-owned subsidiary of Mascoma Bank, has been a key player in a number of significant economic development projects, with more than $230 million in tax credit investment undertaken, many of them in New Hampshire.