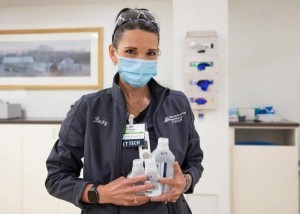 CT supervisor Becky McKinley poses for a portrait holding Omnipaque contrast fluid, which is in short supply, in the CT, oncology and radiation room at Cheshire Medical in Keene. (Hannah Schroeder/The Keene Sentinel)

Local hospitals are triaging medical scans and procedures in an attempt to ration a widely used contrast dye that is in short supply around the globe.

The dye, made by General Electric, is used for a variety of purposes. The liquid is typically injected into a patient’s veins and provides higher contrast than imaging procedures, like CT scans, without it.

The dye helps doctors to more easily see several issues, such as how organs are functioning, diagnosing brain bleeds or determining if a tumor has grown or shrunk.

Shortages of the dye were reported to the U.S. Food and Drug Administration in May, traced to General Electric Healthcare’s Shanghai plant, a facility that produces most of the world’s supply of contrast dye.

The plant began rationing orders in mid-April after a Covid-19 lockdown temporarily shut down its production of the dye, according to the American Hospital Association.

As a result, hospitals worldwide have been forced to ration their supply. However, local officials say they are prepared to deal with it.

“We are handling it in the way that we managed PPE, because we knew that appropriate PPE was absolutely essential for certain circumstances and maybe not in others,” said Dr. Kat McGraw, chief medical officer at Brattleboro (Vt.) Memorial Hospital.

Patients with scheduled routine or elective medical scans that use contrast dye will be evaluated by the hospital, McGraw said, to see if their appointment can be postponed or if another imaging procedure that doesn’t need dye could be done instead.

Examples of the latter include MRIs and ultrasounds, which can be just as effective as other scans depending on the patient’s needs.

The hospital did not have an exact number of procedures that have been rescheduled because of the shortage Friday.

For those who still need a scan using dye, McGraw added the hospital has about two weeks’ worth of it on hand, with intermittent deliveries still scheduled to help keep them somewhat stocked.

It’s a similar scenario at Cheshire Medical Center in Keene and at Monadnock Community Hospital in Peterborough, with imaging scans being triaged when needed.

Dr. Don Caruso, president and CEO of Cheshire Medical, estimated that with conservation measures — the Dartmouth Health affiliate had about 18 days’ worth of dye as of Wednesday.

Approximately 40 routine or elective procedures or radiology scans were rescheduled as of that same day, according to data from the hospital.

“If [a patient is] going to have a procedure that is considered elective by their physician, it might take a little longer than they’d normally expect,” Caruso said. “But, if it’s urgent or in the ER and you need it today, you’ll get it today.”

He added that, under new guidance from the N.H. Board of Pharmacy, hospitals are allowed to use single-dose vials of dye slightly beyond their expiration date, helping its supply.

“Our estimation, our prediction, for how long our supplies will last was actually longer than what we expected, so the conservation measures are working,” he said.

The hospital did not provide The Sentinel with the number of procedures postponed Friday. Perli noted that the medical team has not had to limit any procedures that would have “any adverse effect on patient care.”

All of the hospitals anticipated to have their normal shipments back on track near the end of June.

Until then, officials stressed that patients should not cancel an upcoming procedure on their own, but should consult with their doctors to determine next steps.

“We want those physicians and those providers to review what studies are needed,” Perli said.

Funding for the Monadnock Region Health Reporting Lab comes from several sources, including The Sentinel and several local businesses and private donors. We continue to seek additional support. The newsroom maintains full editorial control over all content produced by the lab. This article is being shared by partners in The Granite State News Collaborative. For more information visit collaborativenh.org.