Lincoln Soldati remembered as a force in law, politics, community and family

Former longtime county attorney dies at 73 after battle with cancer 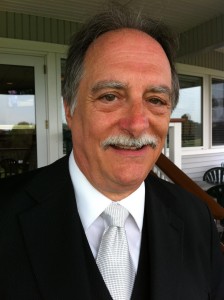 The death of Lincoln Soldati on Nov. 6 was not unexpected, but his loss is felt throughout the Seacoast and most of all in Somersworth, where he was once mayor and his family has deep roots.

Soldati battled cancer for many years. Last Friday, his wife Kathleen posted on social media: “Lincoln decided to place himself in hospice tonight after diagnosis of stage four esophageal cancer at Mass General. He’s now at Hyder House hospice in Strafford County Complex in Dover where he first made his name as county attorney.”

He died Sunday, surrounded by his family and friends.

“He is not in pain any longer,” Kathleen Soldati said Monday.

Lincoln Soldati was born April 17, 1949, the son of Lincoln A. Soldati and Virginia Thomas. A New Hampshire native and veteran, he graduated from St. Thomas Aquinas High School in Dover, the University of Notre Dame, and earned his law degree from Franklin Pierce Law Center (now UNH School of Law).

Kathleen said his final hours Sunday included many family members visiting, with their oldest son Pacifico bringing his 7-year-old son Vega, joining another older grandson, Marmadou. Their son Emmett, owner of Teatotaller cafe, played “his ’60s music” for him. And numerous other family and friends said their goodbyes.

Lincoln Soldati was active politically and in his community.

Lincoln Soldati’s family said he was a Renaissance man, skilled in various trades, including woodworking which he put to good use in Emmett’s two Teatotaller cafes in Somersworth and Concord, building his daughter Gemma’s large puppets for her show “The Adventures of Sleepyhead,” and various projects like designing and building their kitchen in Somersworth. He played the drums in two bands with his childhood best friend, Bob Fellows – The Sceptres (junior high) and the Re-Sceptres (after 2010). He loved fishing with his friend Dan Vincent. With his sister, Jennifer, and often his son, Michael, he climbed most of the 4,000-footers in New Hampshire.

Kathleen said he loved to cook, inheriting recipes from his father, Lincoln, who ran Soldati’s, a restaurant in Durham in the 1950s. She added he was proud of his Italian heritage and loved taking his family to visit his ancestral home near Parma to meet his Italian cousins.

“He was proficient with the sewing machine, making caftans for himself and costumes for his children,” Kathleen said. “In later years, he turned to beekeeping, taking a two-week class from renowned expert Michael Bush, before setting up hives on his property in Somersworth, producing ‘Hilltop Honey.’ This year, as his health declined, he refused to stop moving and in August, joined his daughter Gemma at the Edinburgh Fringe Festival for her show, ‘The Adventures of Sleepyhead.'”

Lincoln Soldati spent nearly 40 years as a trial lawyer, prosecutor, defense attorney, general practitioner, teacher, criminal justice advocate, speaker and elected public official, according to information provided by his family. He served as the mayor of Somersworth (2010-2011), served on the Somersworth School Board (1990-1997) and spent many years as the Strafford County attorney (1983-2000), a position he left to take on the role of defense attorney, based in Portsmouth.

He ran for Congress as a Democrat in 2017, falling short in a large field of primary candidates.

His family recalled he drove to North Dakota in 2017 to Oceti Sakowin Camp, an historic gathering of tribes, allies and people from all walks of life standing in solidarity to halt the Dakota Access Pipeline.

His family said Soldati testified for nearly 30 years before several state Senate and House committees on a variety of issues concerning the criminal justice system, including victim’s rights and compensation, child protection, reciprocal discovery, juvenile justice, legal limits for DWI, the Bail Reform Act, competency and commitment procedures, expanding wiretap use in drug cases, and he testified twice before the NH House Judiciary Committee against the death penalty.

Soldati assisted in the design and implementation of the first statewide protocol for rape cases. The product of this task force has received national recognition and the rape kit developed has become a model, his family stated.

“Like so many in the Seacoast region, I’m heartbroken by the loss of Lincoln Soldati,” U.S. Sen. Jeanne Shaheen said in a prepared statement. “As mayor of Somersworth, Lincoln was an outstanding public servant who cared deeply for residents and always put working families first. He was a wonderful leader for the Democratic Party and a role model to many who found the same calling to serve their communities. My heart goes out to the Soldati family at this difficult time.”

“He was a skilled and compassionate litigator, stern and fair,” said Strafford County Administrator Ray Bower. “He was a wonderful family man, who was so proud of his wife and children’s accomplishments. He was a friend of my family for 30 years and our lives are better for knowing him.”

Each of Soldati’s children shared thoughts on him as well.

Pacifico: “My father, Lincoln Soldati, was an unstoppable force for good in this world who showed us all how to make the most of our time here, simultaneously a serious professional fighting for justice while also enjoying the diversity of fun experiences we have to choose from. Every day was an adventure with him, and he has my undying gratitude for inspiring in me an unrelenting love of life, humanity, and selfless service.”

Michael: “In all my life I don’t believe I’ve ever witnessed a love greater than the love my father shared with my mother. It was a fire that forged four spirits the like of which I’ve never met, a fire that brought everyone together, kept a whole neighborhood warm. His warmth touched so many lives, and his work saved countless more. “

Emmett: “Some of my fondest memories of my father came from supporting and watching him on the campaign trail. It was during these experiences — whether for county attorney, mayor, or Congress, that I came to know how he had touched the lives of so many in our state. His anything-is-possible attitude was inspiring and his commitment and courage were unrivaled. The work of serving — and fostering — community pays its own dividends. The love and support our family has already received from all those he’s impacted has reinforced how important a life of service is.”

Gemma: “I’ve had the distinct pleasure of learning that while he was in fact an extraordinary individual, my father was human, just like me, here to do his best and love with his whole heart.”

Crystal Paradis, a former Somersworth city councilor, said, “I’m so lucky to have gotten to know this man through the family and community that he and Kathleen Soldati created over their life together. This weekend, we said goodbye to Lincoln and he became one of our honored ancestors. Of the many sweet last moments I witnessed, I will never forget him telling Kathleen, ‘We did this,’ to a room full of people they had brought together.”

While many know Lincoln Soldati as a public official, activist, attorney and community member, one of his greatest roles in life, according to his family, was being first on the dance floor. For a final celebration, they said he asked to have loved ones gather to dance to his favorite music, break bread and share memories. The family will host a potluck event, “The Party of Life for the Life of the Party, Lincoln Soldati” on Sunday, Nov. 13, 2022 at 3 p.m. at the Somersworth VFW, 43 High St., Somersworth. The Soldati family asks that in lieu of flowers, friends consider supporting his longtime favorite organization, HavenNH, which offers violence prevention and support services. See information at havennh.org.