On a sunny day in mid-April it’s easy to see the results of the state’s investment in Jericho Mountain State Park in Berlin.

With no leaves on the trees yet, the view from the Robert A. Danderson Visitor Center is unobstructed by foliage, and the network of trails up into the surrounding hillsides can be traced with a fingertip.

The visitors center looks out over the day-use beach area at Jericho Lake, which on this early spring afternoon is still covered with snowy ice. It’s the end of the snowmobile season and the trails at Jericho are in their transitional state – not enough frozen coverage for winter travel but too sloppy still for the off-highway recreational vehicle trails to open. The trails are closed until the end of mud season.

The park is the state’s newest and the first to be created specifically for all-terrain vehicle use. The first 14 miles of trails opened in 2006, and while the build-out detailed in the 2007 master plan has been slow to materialize, that hasn’t stopped riders from enjoying the now 80 to 85 miles of trails.

Those riders come from as far away as Brazil, and they stay at region’s hospitality establishments, rent machines from the area’s ATV businesses and eat at local restaurants.

“Jericho has had a huge economic impact on our area,” confirmed Paula Kinney, executive coordinator of the Androscoggin Valley Chamber of Commerce. “We are heading into mud season right now, but when those trails open at the end of May, the hotels and restaurants are going to be buzzing with ATVs.”

Kinney says more businesses have joined the chamber since the ATV trails opened up and the chamber increased its promotion of the region’s recreational opportunities.

A decade ago there was no state park in Berlin. The 293 acres of Jericho Lake and its shoreline was owned by the city, with another 7,200 acres of surrounding land owned by T.R. Dillon Logging. Dillon had bought the land to log it off, which he had almost completed, and was a willing seller when the city rezoned the area out on Route 110 as the Jericho Gateway Zone, to encourage development around recreational land.

City officials approached the state with a proposal to create an ATV park on the land. It was a win-win for the state and city. The state could meet the rising demand for OHRV trails, and the city could attract visitors, bringing new customers to existing businesses and creating a welcoming climate for new businesses. It was one of several initiatives undertaken by the city in order to diversify the economy and make the region less dependent on the pulp and paper industry.

Pam Laflamme was Berlin’s city planner when the Jericho area was rezoned. Her responsibilities haven’t changed greatly, but her title has. She’s now the city’s community development director, a truer reflection of the work she does.

The ATV park and trails have added more vibrancy to the city, especially during the annual Jericho ATV Festival’s block party in downtown Berlin. A trail runs through the city from Jericho to the trails in Success, and to Ride the Wilds, the network that connects 1,000 miles of trails in Coos County, with Gorham as the southern access point.

So far, the increase in visitors hasn’t led to the opening of a new hospitality property in the city, but Laflamme remains optimistic.

“There is definitely interest in having a hotel, we just aren’t there yet, but there is a lot of behind-the-scenes connections being made with developers.”

Chris Gamache, chief supervisor of the NH Bureau of Trails, says that the accommodations had close to a 100 percent occupancy rate last season.

“Given the fact that over half [54 percent] of the visitors are traveling between 100 and 300 miles to get to the park, there is certainly a need for overnight accommodations by this group of travelers. A hotel in Berlin and/or expanded camping facilities would probably be most welcomed and utilized by this group,” reported Larry Gomes, White Mountain Ridge Runners’ assistant trail master, and Kinney in the visitor analysis of summer season 2014 released in February.

Those figures were taken from the guestbook at the Jericho Warming Hut for the 2014 season (mid-May to mid-December). The White Mountain Ride Runners Snowmobile Club maintains the hut, which is accessible by snowmobile in the winter and ATV in the spring, summer and fall. The Androscoggin Valley ATV Club helps build and maintain the OHRV trail network in the park and in Success.

Among those who signed the hut’s guestbook were 28 visitors from seven countries, including two from Brazil, and 3,425 visitors from 32 states.

‘Booked for the weekend’

Stephen Clorite of Berlin wants to help fill the need for more camping sites. He moved up from Danbury with his wife and two daughters in 2013, having purchased 300 acres near the park in 2011. The property was heavily logged, so there’s already open area for sites on Jericho Gateway Family Campground, though Clorite has to wait for bank financing and a site review before charging campers.

“We’re going to do a slow build that will culminate in about 200 sites and 30 cabins, a paintball arena and a lodge, among other attractions. I’m sure I’ll add as space and time permit.

“It’s really still in its infancy, which shows how strong an economic impact rebranding for recreation has had on our community,” Clorite says. “We joined the Androscoggin Valley ATV Club in 2011 and became a sponsor of the Jericho ATV Festival, with a small booth and a donation of prize money for the mud pit races. We started working with the N.H. Bureau of Trails to open the trail through our property to OHRV travel, as we felt that the OHRV community would be our main clientele.”

One business that has prospered due to the park is Jericho Motorsports, which sells, services and rents OHRVs, including snowmobiles. Owner Randy Cicchetto got in on the ground floor, supplying courtesy ATVs for tours of the land when city and state officials were working to convince the state’s elected officials that an ATV park in Berlin was a good idea. 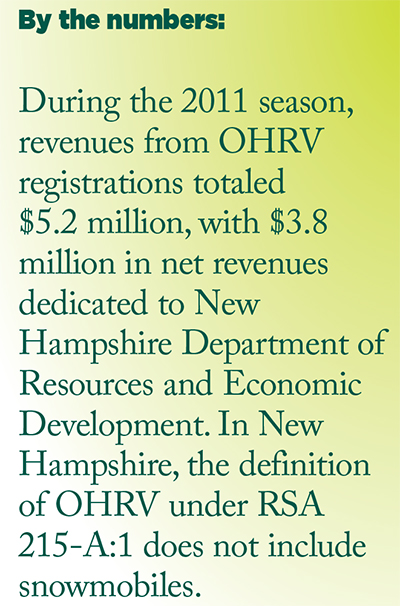 “We’re usually booked for the weekend,” Cicchetto’s daughter Leigha says, confirming the demand for rentals. She says they are “extremely” busy during the ATV festival.

A new trail for 4X4s will open at the park this year, Gamache says. He says there hasn’t been much trail creation in the last two years because the Ride the Wilds project has been the biggest priority in the region. He adds that Ride the Wilds has boosted business throughout the county.

“It’s led to a huge increase in the North Country,” he reports. “ATV rentals have gone through the roof.”

Karl Stone, marketing director of the NH Grand tourism initiative, is equally optimistic about the impact of riding throughout the county. “I think we’ll begin to see more and more businesses created or strategically located in close proximity to the trails as the number of riders and popularity of the trails continues to grow.”

In the meantime, undeveloped or underdeveloped land is available on Route 110 in Berlin, much like it was on the commercial strip in North Conway 40 years ago. The Androscoggin Valley’s ATV tourism industry, as Clorite said, is still in its infancy.