Legislative session has goodies for business

But ‘we aren’t getting everything we want’

New Hampshire businesses may not get all that they want from the Legislature this year, but they may be getting an awfully lot.

As the finish line approaches to the 2015 legislative session, it looks like lawmakers may pass a tax cut as well as expand the research and development tax credit. There are also two bills that could have increased electric rates, but they now seem aimed mainly at residential customers, leaving commercial users largely off the hook.

And two major business-friendly bills revamping banking and securities laws appear on their way to becoming law, despite some last-minute hitches.

There are some small wins for key industries as well, and even potential bills to benefit specific companies.

“But it is far from over yet,” said David Juvet, vice president of the Business and Industry Association. “We aren’t getting everything we want by any means.”

A case in point is fee schedules to control workers’ compensation medical costs. Fee schedules weren’t what the BIA wanted — it was neutral on the matter, since the health care industry, which constitutes part of its membership, strongly opposes them, as do some conservatives that oppose government intervention on ideological grounds.

But a coalition of some 35 other business groups came out swinging for controls on medical fees. And they missed. Two fee schedule bills languished, and when the House Labor Committee passed an amendment calling for guidelines on medical fees, that effort was soundly voted down.

Tax cuts passed by the Senate on June 4 won’t start until January 2017. Under the measure, the business profits tax rate would go down from 8.5 to 8.3 percent, though it would fall to 7.9 percent by 2019, if not altered again by future legislatures. Similarly the business enterprise tax would fall from 0.75 percent to 0.725 percent and then eventually drop to 0.675 percent on the same timeline.

While the cuts are relatively modest, they could have a big effect on the state budget, with a predicted loss of $19.4 million in fiscal year 2017, according to a June 2 estimate by the state Department of Revenue Administration. That shortfall would grow to $47 million a year by fiscal year 2020. (Supporters argue that the revenue wouldn’t shrink in absolute terms if the economy grows enough.)

In addition, raising the cap on the research and development tax credit from $2 million to $7 million won’t affect this budget at all, since it would start in July 2017.

Still, cutting revenue means slowing spending, and some of those spending reductions haven’t made the BIA or other business groups very happy, especially those contained in the House budget.

Of particular concern are reduced spending on higher education and on roads and bridges as well as Medicaid and other health programs.

Then there were major slashes that galvanized particular industries.

First, there’s the cut to the Office of Travel and Tourism Development budget. The office is supposed to be given 3.15 percent of the money raised through the rooms and meals tax, which would have brought in about $3.7 million each year. But the House knocked the funding down to a $1 million a year. The Senate — after getting an earful from the hospitality industry — reinstated the money. Now, the next step is a conference committee.

Usually, the final amount would come out somewhere in between, but Henry Veilleux, lobbyist for the NH Lodging & Restaurant Association is hopeful that the House will give in.

“They didn’t have it in for tourism,” he said. “They just ran out of time. The House has other priorities and the Senate was very strong on this issue.”

Then there’s the House’s raid on the $52 million renewable energy fund.

The fund isn’t funded by taxpayers but by ratepayers via the state’s utilities, which pay into the fund if they don’t meet increasingly stringent renewable energy portfolio standards.

The money not only benefited the homeowners and business that received rebates for their solar panels and other alternative energy systems, but the local businesses that installed and supplied them.

The newly formed NH Clean Tech Council lobbied hard after the House move, and the Senate budget left most of the fund intact, though it did grab $2.2 million over the biennium for homeland security and shifted nearly $500,000 a year to the Site Evaluation Committee. 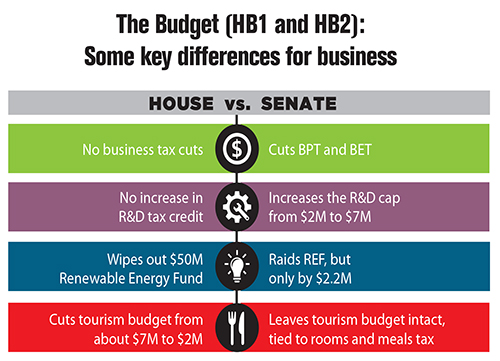 “It’s a big improvement from where the House started, but it’s still a raid,” said Kate Epsen, executive director of the NH Clean Tech Council.

Commercial ratepayers did better than their residential counterparts in the compromise over Senate Bill 221, the Eversource divestiture and securitization bill, which easily passed the House on June 3 and was agreed to by the Senate the following day.

The legislation hands the tab to ratepayers for the losses Eversource (formerly Public Service of New Hampshire) is expected to incur by selling off all of its generating assets, mostly the $500 million cost (including interest) of its mercury scrubber for its Bow plant.

All ratepayers in Eversource’s service area (not just those purchasing energy from the utility) would have to pay that tab though “stranded costs,” a non-bypassable increase in the electricity rate. (Supporters point out that the cost would be higher if Eversource didn’t sell its assets, since the utility would be entitled to a 10 percent return on the scrubber, but the cost would only be paid by Eversource ratepayers).

Large commercial and industrial users contend that if they bought their energy elsewhere — and about 90 percent of them do — they shouldn’t have to pay those stranded costs. They also argued that higher electric rates threaten their competitiveness, hurting the state’s economy. But about a fifth of residential customers use an alternative supplier as well. Why should they have to pick up the entire tab?

The legislative compromise was “rate design,” spelled out in a document circulated to the House Energy Committee, which would only surcharge large users .24 cents/kW hour, as opposed to the residential rate of .82 cents/kW hour, with small and medium commercial users in-between.

That rate design should save an average large user about $5,000 a month.

Legislators are also on the brink of overhauling banking and securities law, in bills that passed the House on June 3.

There was a hiccup on the House floor, when Rep. Neal Kurk, R-Weare, tried to attach an amendment allowing refillable beer containers, but that was voted down.

SB 266, the securities overhaul, faced a more serious challenge. The 51,000-word bill would streamline a securities law that was devised in 1933, by starting from scratch with the Revised Uniform Securities Act, a model law that has passed in some 17 states.

The biggest change would allow a business to sell private placements to 25 investors per year with no cap on the total number of investors. Current law only allows 10 per year with a lifetime cap of 25.

But a House amendment would cut about $1 million in business filing fees. While a threatened floor fight never materialized, and it passed June 3 on a voice vote, the formerly revenue-neutral bill now might become part of the budget negotiations. 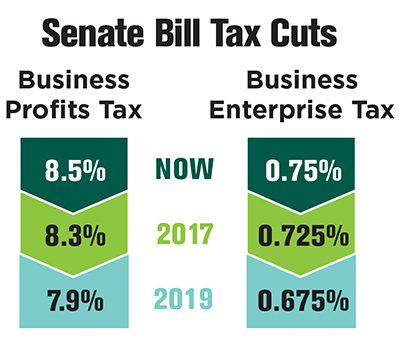 “We have concern about the fiscal impact,” said Liz Gray, director of entrepreneurship at the NH Business Finance Authority, who heads up the Live Free and Start initiative, which has made this bill a top priority.

Remember all the controversy over the New Hampshire Medical Malpractice Joint Underwriting Association, the target of litigation for hanging on to too much of the premium paid by providers? House Commerce Committee Chair John Hunt, R-Rindge, has sponsored a bill to phase it out, and the measure is on its way to a conference committee. It may be a contentious one, since the Senate added a last-minute amendment relating to oral cancer medication parity.

SB 232, which cleared both chambers, would overrule the Department of Revenue Administration, which previously asserted the right to tax commercial leases of less than 30 years. The Legislature said it would have to keep the bar at 99 years.

HB 391 would have required retailers to collect a surcharge on prepaid phone cards to fund E-911 — a big deal since they don’t have the infrastructure in place to collect sales taxes, as in most states. The bill, on its way to the governor, includes a 5 percent commission, and exempts those that don’t sell many cards.

Obtaining a business trade name may become easier. The current standard — “likely to be confused with or mistaken for” — caused some firms to wait weeks while the secretary of state came up with a ruling. Instead, SB 223 changes the requirement that the name “be distinguishable from, and not the same” as existing names.

The House passed the measure on to the governor, despite the argument by Rep. Kenneth Gidge, D-Nashua, that the bill might allow some company to call itself “Starbuck,” as opposed to Starbucks, or “Wallmart,” as opposed to Walmart.

“We must do something to make it easier,” he said. “But we do not want to make it ridiculous.”

When Les Otten announced his plan to redevelop The Balsams resort in Dixville, he said he needed a law that would allow establishment of a special assessment district in an unincorporated area. A few months later, Governor Hassan signed into law SB 30, which does just that. And right after Planet Fitness said it was going public, it threatened to leave the state unless the BPT is amended so it wouldn’t have to pay the tax on the sale of stock. Senate lawmakers amended HB 550 to do just that, and the bill passed June 4 on a party-line vote. It is now on the way to a conference committee.