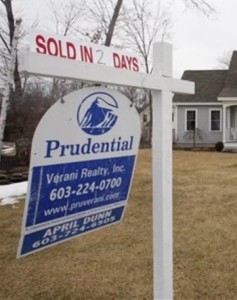 According to the NH Association of Realtors, 1,647 single-family home were listed for sale in April – down 11.8 percent from 2021, but 300 more than were available in March. But it doesn’t seem to matter, since they are being snapped up so fast – an average of 23 days before closing. There were 1,457 pending sales in April, 87 more than in March.

With that kind of scarcity, it’s no surprise that that the median price of a home in New Hampshire is $440,000, 14.7 percent over last year. Bidding wars are common, and homes are selling for 4.4 percent over asking price.

It’s the same story for condos, which are selling for a median price of $422,135, a 15.7 percent increase from last year. Sales are also down by nearly 20 percent.

Then there are interest rates, which have risen well past 5 percent (they were about 3.5 percent a year ago), and those homes are becoming increasingly out of reach for first-time homebuyers. The affordability index of 75 is down 31 percent down from last April, when it was over 100. The further the index value is below 100, the less affordable it is for an individual or family with a median income. It has dropped 15 points in the last month alone.

This is occurring all over the country, but in New Hampshire the affordability problem is more intense. Nationally there is a two-month supply of housing on the market. In Granite State, there is are less than a month’s worth available.

The highest median sale price is in Rockingham County just short of $550,000, a 16 percent increase over last year. Merrimack County homes sold fastest – 15 days – with a median sale price of $405,500. Coos County, already with the lowest-priced real estate in the state, was the only county to experience a price drop in April, down 14.6 percent to $152,500, based on 38 sales.