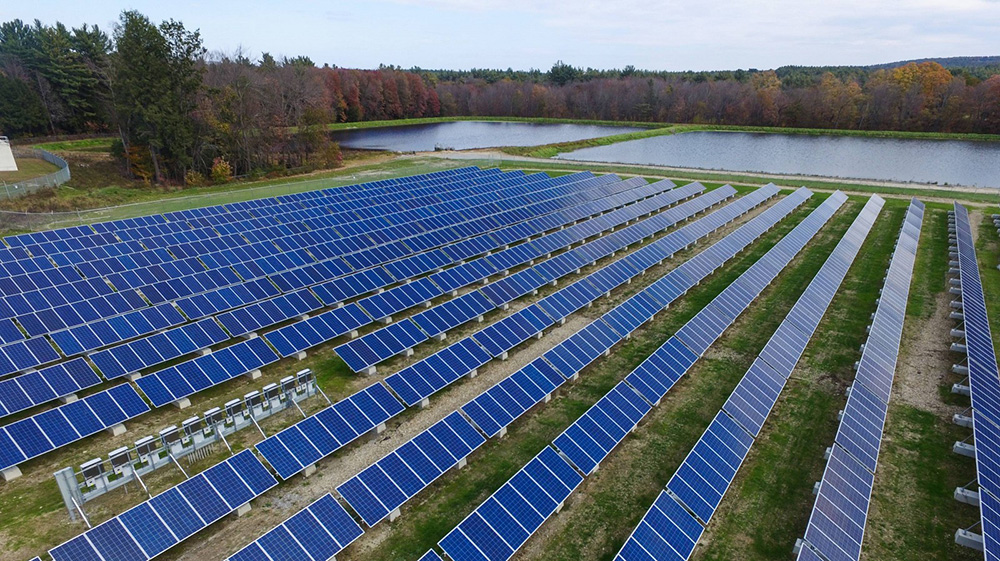 Peterborough once held the largest solar farm in the state, at 1 megawatt, but it’s nothing compared to what’s now being proposed.

The site is some 600 acres, about a mile and a half from the heart of Fitzwilliam, populated by red maple and oak, white pine and birch, with a covering of grasses and ferns.

In about a year and a half — if all goes according to plan — more than 100 acres of trees will be chopped down, and about 100 workers will be building a massive power plant to send electricity to southern New England.

Welcome to the coming of large-scale solar, which transforms acres of green into shiny black and silver.

Chinook Solar, as the Fitzwilliam project is called, is likely to be the first utility-scale solar project to be built in the Granite State, though it has been, and will be, years in the making. It certainly won’t be the last.

NextEra, the giant Florida-based energy company that owns the Seabrook nuclear power plant, expects to finish Chinook in 2021 and then sell the 30 megawatts of power it produces to providers in Massachusetts, Connecticut and Rhode Island.

That’s a small step in energy production compared to the 1,200-MW Seabrook plant, but a giant leap for solar energy in New Hampshire.

The Granite State’s total solar capacity of about 85 MW is 38th in the nation and far behind its neighbors. But if Chinook and other projects go through, there would be another 300 MW coming down the pike, and those are the projects that NH Business Review has found in the pipeline.

Developers of at least 22 large-scale solar projects, totaling 215 MW, have already applied for interconnect agreements in the Eversource utility area alone, said Eversource spokesperson William Hinkle, indicating that there are at least seven projects that are not public.

Most of the projects are “merchant” facilities, projects being pushed by energy corporations bidding on decades-long contracts with out-of-state utilities, though that may change if New Hampshire joins the bidding war for renewable energy. (Lawmakers seem likely to pass a bill to look at that possibility, but even so, a New Hampshire renewable request for proposal is still years away.)

Besides Chinook, NextEra has at least three other such proposals in the works, totaling about 120 MW, including a 50 MW project in Hinsdale (bidding on a Rhode Island RFP), one already rejected by Concord officials that it hopes to revive, and another one in Tilton that it has yet to present — both with contracts to deliver power to Connecticut. 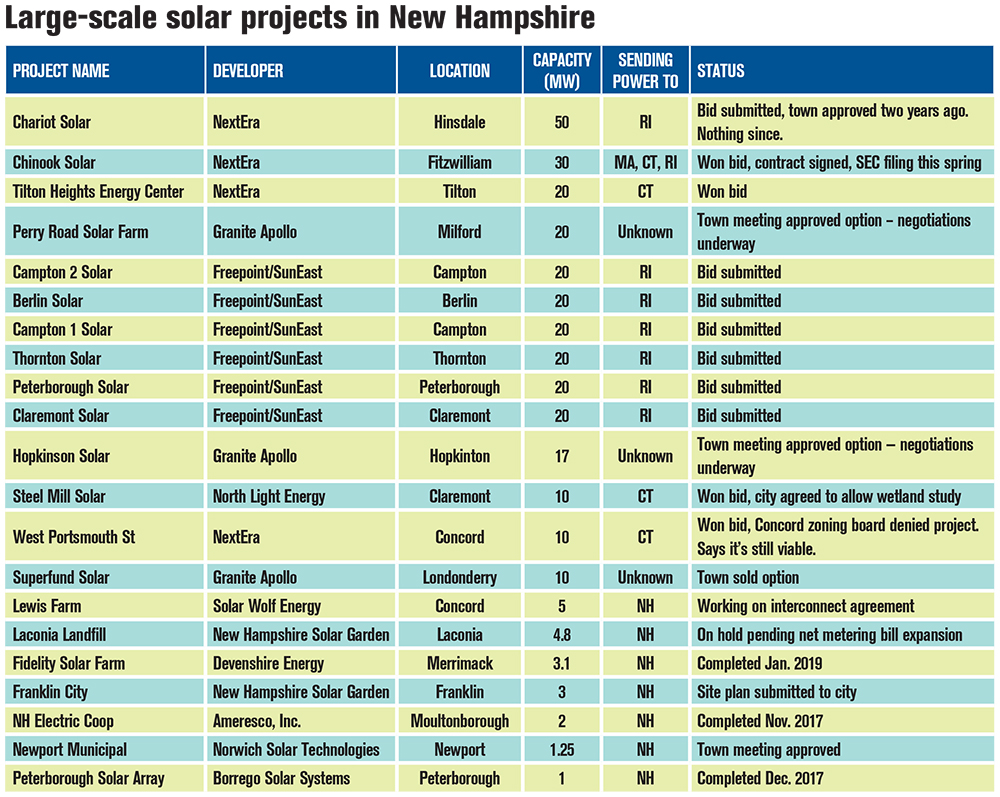 Pennsylvania firm SunEast Development is partnering with Freepoint Solar, a subsidiary of Freepoint Commodities, a $2.4 billion firm that trades in oil, coal and natural gas. It has proposed six 20-MW projects, including in Peterborough, Claremont and Berlin as well as other northern New Hampshire towns. Those projects lost out on Massachusetts’ last RFP in 2017.

“It’s a marathon, not a sprint,” said Tom Swank, president of SunEast. Swank said he is continuing to develop the sites, though at least three of the municipalities said they have not heard from the company in years.

Granite Apollo, a Concord firm originally created by Dyn founder Jeremy Hitchcock and political consultant Chris Stewart, doesn’t have any contracts. But it does have town approvals to move forward on three projects – in Milford, Londonderry and Hopkinton – totaling 47 MW, and is working on one undisclosed project with at least 30 MW.

“We don’t bid a project until we work with the community first and get land control,” said Stewart, of the company, which was recently acquired by Olivewood Energy, a large solar company based in Williamsville, N.Y. “We focus like a laser beam on products that actually get built.”

(Hitchcock is no longer with the company, said Stewart.)

How much will actually get built still remains a question. Winning a bid doesn’t guarantee construction, though most players, including Stewart, do say it is a prerequisite. NextEra won its Connecticut bid for a 10-MW project on land owned by Brochu Nursery in Concord, but the city’s zoning board rejected the plan in June, essentially treating solar panels like concrete when it came to covering habitat.

But Concord, which is now trying to move to 100 percent renewable energy,
is changing that zoning ordinance, and NextEra considers the project still “viable,” a spokesperson said in an email.

That came as a bit of a surprise to Assistant City Planner Beth Fenstermacher, who said that even under the new ordinance the project wouldn’t be in compliance, because more than 40% of the footprint would be covered in panels.

“I suppose they can go for a variance. It’s up to them. It would have to be a whole new application,” she said. At deadline, she had not heard from the company.

The Concord rejection shows the obstacles that any large solar project could face either at the local or state level.

Since it is 30 MW, Fitzwilliam would go before the state Site Evaluation Committee. The SEC requires a local public hearing to be held 30 days before its hearing. NextEra officials approached Fitzwilliam, meeting with the planning board and the board of selectmen, where they were peppered with questions from residents demanding how much input they will have in the project and how much the company will pay the town in lieu of taxes. But at deadline, the town has yet to set up a public hearing.

One Fitzwilliam resident, Priscilla Borden, wrote a letter to The Keene Sentinel, charging that the Chinook project “will rape the land … We have acres and acres of shopping-mall roofs and parking lots throughout New Hampshire … Why are we looking at cutting down our forests and taking over farm fields?”

“Siting is going to be a challenge,” said Madeline Mineau, of Clean Energy NH, whose members have faced similar battles before over wind projects. “We have to be able to put these somewhere. You are not going to build a utility-scale solar project without cutting down trees.”

As for rooftops, she said, “there is simply not enough space on rooftops to build all the solar that is needed.”

Utility solar needs land. Solar may greatly shrink the carbon footprint when it replaces carbon-based energy (as much as eight times), even accounting for the loss of CO2-sucking vegetation, but measuring by kilowatt per acre, solar requires three times the land mass to produce the same amount of energy a nuclear and gas plant does (not accounting, however, for the fracking and mining to get the fuel).

The geographical footprint for wind and hydro is even larger.

Utility-scale solar produces such a “large slug of power” that it needs to find an end user, but that’s just half the story, noted Stewart of Granite Apollo. Only about a quarter of those who receive approval to connect to the grid, end up doing so. That’s because other companies “crash and burn” when it comes to getting local support.

He pointed to positive town meeting votes in Milford, Hopkinton and Webster. Hopkinton & Webster are both co-owners of the landfill on which the project will be built.

While negotiating the details of those contracts, he had already signed a contract with Londonderry, though that array — built over a Superfund site — will have its own set of regulatory problems.

There is still a long way to go. The approvals only give him four-year options on the land, but he is confident that he can find a customer for the power, either a utility, a major company or institution.

The cost of solar has gone down so much, he said, “that I would put up utility solar, if done right, against any other energy project.”

The fourth company proposing a utility-scale solar project is North Light Energy, the creation of Aaron Svedlow, a former employee of NextEra.

The firm is trying to put up a 10-MW array on an 80-acre industrial zone in Claremont. The Steel Mill Solar project was another winding bidder of the latest “zero-carbon” RFP from Connecticut.

Svedlow, though, would not tell NH Business Review where the power is going, even though it is on the front page of his Connecticut bid, nor did he reveal who he was partnering with, though he did win the town’s approval for a wetland study.

“It’s just in the preliminary stages,” he said. “That’s all I have to say about the matter.”

The project would be the second one proposed in Claremont, after SunEast’s
20-MW proposal which is on hold pending the release of the Rhode Island RFP results.

“Who would have thought?” said City Manager Nancy Merrill. “We don’t even have a zoning ordinance to deal with this. We’ll have to take this one at a time.” 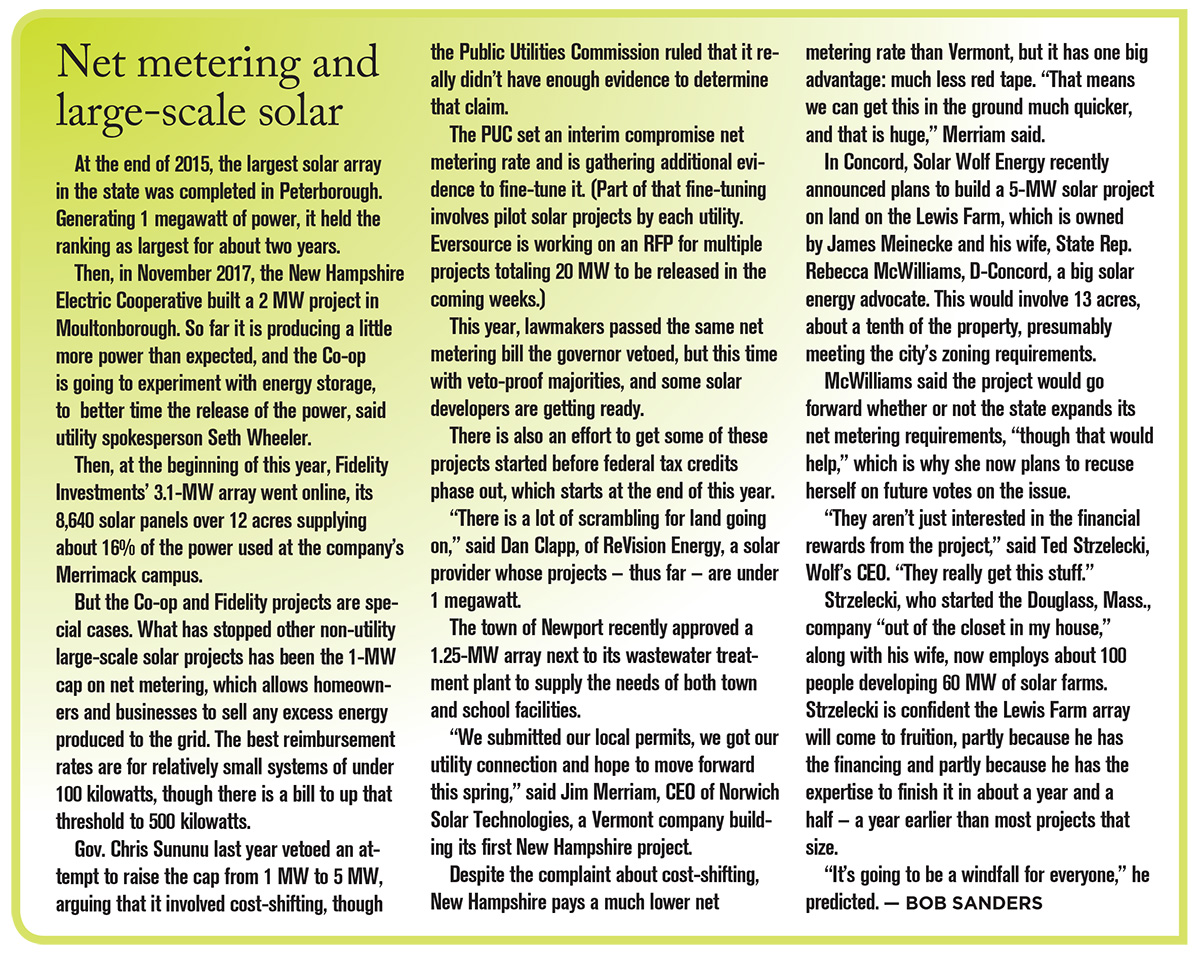