The real costs of allowing them are their impacts on landscapes, life and landfills 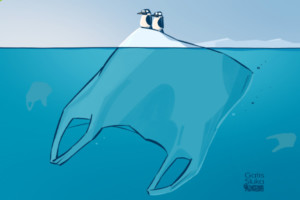 A growing number of New Hampshire residents are calling for some way to eliminate the hundreds of flimsy single-use plastic bags taken home by shoppers every day. Legislation is being introduced to encourage consumers to use sturdier bags that can be used many times instead of wasteful plastic ones used for minutes then thrown away. States and municipalities nationwide have taken this step.

New Hampshire is lagging behind. But a bill will be introduced in the New Hampshire House in January that will restrict these types of bags at stores statewide. Another bill, supported by some local control advocates, will instead enable towns and cities to regulate them.

Both of these bills, modeled after approaches used across the country, are crafted to be simple and cost-effective for New Hampshire consumers and retailers alike. Sadly, opponents have insisted on misrepresenting these simple solutions to our plastic problem to arouse alarm by the public.

The bills are being labeled as a state fee on all plastic bags given out at stores. This is not true on several counts, and deliberately mischaracterizes the content and intent of the bills.

Although we will still be able to buy boxes of plastic bags on store shelves, flimsy, single-use bags will no longer be distributed by stores at all. Instead, consumers can either bring their own bags, or if they don’t already have them, pay a minimal fee for the heavier, reusable plastic bags provided by the stores for their next shopping trip. The heavier bags with handles and a store logo are already being made available by stores. They last for years and are useful for any number of things.

Stores will recoup the cost to them of these bags by charging a minimal amount. The goal, of course, is for our shoppers, like those throughout Europe and many other countries, to shop with reusable bags. No more plastic waste.

While the proposed bills are the least far-reaching, they are designed to be consistent with legislation enacted by our surrounding states, including Vermont, Maine, Connecticut and New York, municipalities in Rhode Island and in over 120 towns and cities in Massachusetts including Boston. It is important to note that once in place, they have been readily accepted by consumers and stores alike in all these areas.

Critics want to convince us that customers will see this as a new cost, that they now get bags for free. In fact the cost of the thousands of single-use plastic, and especially paper bags, provided by stores can be substantial for businesses, but is at least partially hidden in the price customers pay for their purchases. Plastics industry lobbyists know this well. As we shall see, these hidden costs are only the beginning of their cost to shoppers, taxpayers and our state, from impacts to landscapes, beaches, human and marine life, and perhaps less movingly, our landfills.

We are now learning that plastic bags take hundreds of years to decompose into toxic little microbeads that enter our food, water and then our bodies. But now our cities and towns are also recognizing them as part of a true municipal crisis. China no longer takes our solid waste, landfills can’t handle plastic bags, and to the alarm of taxpayers, solid waste companies are significantly raising the cost of collecting and disposing of municipal waste.

The solution? Certainly not recycling. Despite concerted public education, only a small fraction of bags are recycled. Given how unnecessary these bags are, not having them at all is the obvious solution.

Plastic bags are made from fossil fuels. The longer we continue to create a demand for plastics, the longer they are going to be manufactured and the more will accumulate in our world.

Join hundreds of New Hampshire residents and businesses who support legislation that will enable NH to join other states in saying “not here.”

Judith Spang is an 11-term state representative from Durham.