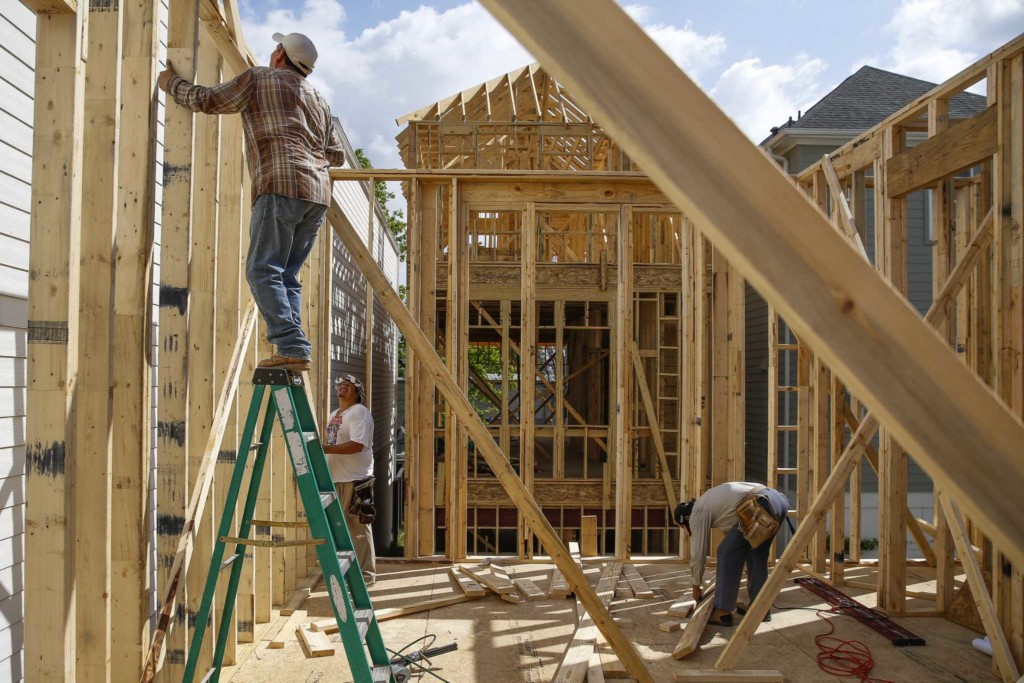 Woodmont Commons is a billion-dollar mixed-used development sprawling over 600 acres in Londonderry.

St. Paul’s School in Concord is one of the most prestigious prep schools in the country.

Ray Farm is an 11-acre 55-plus condo community being constructed in Exeter.

At each of them, workers at construction job sites were misclassified as subcontractors, according to findings by the state Department of Labor.

Worker misclassification is on the rise, both anecdotally and statistically, as some businesses, in the trades and elsewhere, are willing to cut corners or at least look the other way in the desperate search for labor.

“It’s impossible to get labor today,” said Gerald Perrault, a member of Surety Construction, a Rochester firm that initially was fined $53,800 for various labor violations at Ray Farm in February. “You take what subs you can get and hope they are on the up and up. It’s easy to make a judgment call behind the desk. It’s hard when you are trying to get the job done and make a living.”

“The long story short is we paid the subcontractor who never paid the guys,” said Robert Molino of Molino Contracting LLC, a Salem firm that ended up paying about $16,000 in wages and penalties related to violations on a job at St. Paul’s. “But they all said they worked for me, so I ended up paying the fine, and them.” (Records show the general contractor wrote the checks, but Molino said he reimbursed that amount.)

“It was one individual who wanted to be an independent contractor,” said Mario Boutin, the owner of C.I.D Construction, a Chester-based firm that was initially fined $29,000 for violations at Woodmont Commons. “It’s getting ridiculous. We are getting kind of nitpicky here.”

But Joe Donahue, business manager of the Carpenters Union in New Hampshire, who for 17 years has conducted a one-person crusade in gathering complaints and advocating against misclassification, is not sympathetic. He contends that misclassification costs union jobs, leaves workers without protection, drives up worker compensation costs and hurts contractors that are obeying the rules.

“What we are seeing is that it has gotten worse,” he said, testifying earlier this year before the Senate Commerce Committee. “When I first testified, it was totally construction. Today we see hotel workers, restaurants, manufacturers.”

When later asked by NH Business Review if the misclassification numbers are growing because it is becoming more prevalent or spreading to other industries, Donahue said, “Both.”

‘All over the place’

It isn’t found on small jobs, either, said Donahue. Indeed, he has filed complaints with the DOL on “center-of-town projects,” visible projects like Woodmont or the new Hampton Inn and Suites hotel construction site in Keene or on a construction job at Wentworth Douglass hospital in Dover.

“It’s all over the place,” he said. “At Woodmont it was happening in the very first building.”

They found violations by C.I.D. and JAL Construction, a sub of C.I.D, and levied initial fines totaling nearly $50,000. Final fines and violations involving other subcontractors have yet to be determined, according to the DOL. 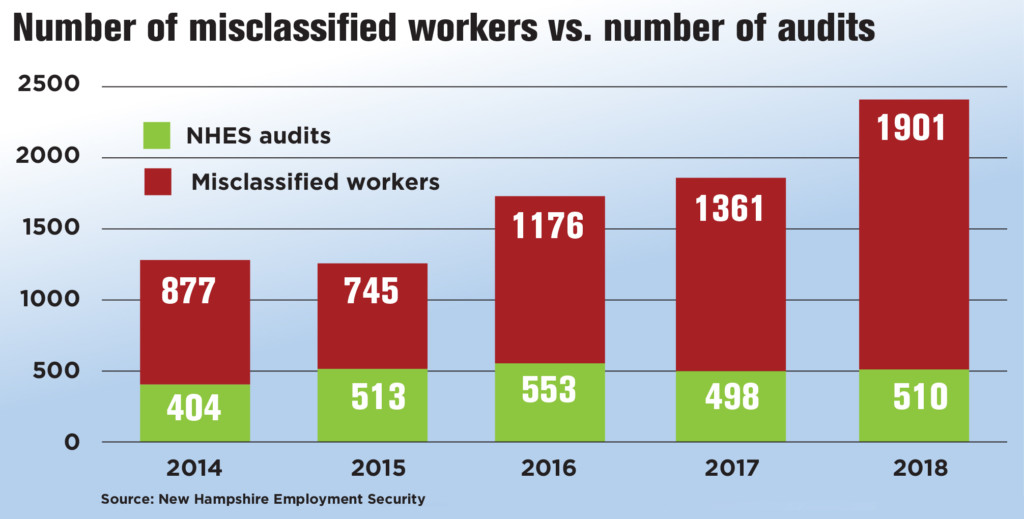 But Boutin of C.I.D. said that the company had fixed the problem to DOL’s satisfaction, and John Jarnagin, vice president of general contractor Performance Building Company Inc., said that the problem has not been widespread.

“We can’t speak for all the subcontractors, but we are not aware of any other problems,” he said. “We make sure everyone working on projects has workers’ compensation and the sub carries it.”

The state’s main two construction associations also dispute that it is a widespread problem.

“I haven’t heard that it has been a major problem,” said Gary Abbott, executive director of Associated General Contractors of New Hampshire. “But we may not see it because most of our members are involved in large commercial jobs.”

“There is a struggle to find workers,” said Joshua Reap, president and CEO of Associated Builders and Contractors of NH/VT. “But that doesn’t mean there are more 1099s.” (1099s are the tax form that would be given to independent contractors, not employees.)

However, the number of misclassified workers has risen sharply, according to statistics provided by the New Hampshire Department of Employment of Security, which conducts about 500 inspections every year.

The number of inspections hasn’t increased, but the number of misclassified workers has, climbing from 745 in 2015 to 1,901 last year — an increase of 150 percent.

Employment Security Deputy Commissioner Richard Lavers didn’t want to speculate on the reason behind the increase, though he said it has not been because of more vigorous enforcement.

“We apply the same standard as we did in the past,” he said.

Rudy Ogden, deputy commissioner at the DOL, did give his opinion.

“It’s because of the tight labor market,“ he said.

According to Ogden, contractors are increasingly turning to labor brokers, subcontractors who deliver the workforce to a general contractor or a subcontractor, sometimes not even staying on the job site. The workers are primarily laborers. Instead of doing a particular job on their own time and with their own tools, they just report to work and do whatever the foreman tells them to for an hourly wage, which is often paid under the table, and sometimes not at all.

“It’s happening all over,” Ogden said. Sometimes subcontractors don’t have any workers’ compensation policy. Other times they do, but it is only for a few employees, yet they may bring 30 or 40 to a job site, he said.

Unlike Employment Security, the Department of Labor doesn’t keep track of the number of misclassified workers. It does keep track of the number of inspections where violations have been found (though not those where no violations were found). That number has actually gone down, from 36 inspections with violations in 2015 to 20 in 2018. The figures don’t show how many workers were misclassified during each inspection, but “we are getting better at teasing those [violations] out,” he said.

Donahue agrees. “Ogden — he is the best. He totally gets it,” he said.

When an employer shows the DOL a contract to prove that the worker is a subcontractor, “he actually sees if the contract is true, if it’s being followed or if it’s just a piece of paper,” said Donahue.

The DOL does disclose the names of businesses that have been cited (unlike Employment Security, which by law must keep the results of its investigations secret). And while the problem has mostly been found in the construction trades, Ogden agrees that it has been spreading. He supplied examples at a restaurant, a hair salon, a sporting good store and a cab company.

“It was bullshit, them being employees,” said John Palreiro, owner of Great Bay Taxi in Dover, about violations from 2015. “I didn’t direct them.”

Great Bay wanted to help out those who didn’t have upfront cash to pay rent on a taxi, he said. So the driver would hand all the money over to a company and get back half. Palreiro now requires that drivers pay for the cabs first, and then keep whatever they make.

“It was the same thing that Uber and Lyft does. They deposit money in the driver’s account and then pay them. But you don’t see DOL going after them.”

Ogden said that inspections are complaint-driven, and so far, there haven’t been any complaints concerning the gig economy.

Since 2012, there has been a lull in legislation when it comes to misclassification. In 2012, lawmakers simplified the DOL ‘test’ to define an independent contractor from 12 to seven criteria. Employment Security has different criteria, and in 2015 there was a failed push to merge the two.

But that might be changing. On Feb. 14, the Senate passed Senate Bill 151 on a party-line vote, which would give DOL the power to directly issue a stop-work order against a subcontractor if its workers aren’t getting paid or don’t have workers’ compensation policies.

Currently, the department can go to court to get a stop-work order. Indeed, it did so 11 times last year, but that takes time, testified Ogden at a hearing on SB 151 in early February.

An employer can halt the stop-work order by appealing it, but in some cases it would “stop the bleeding” of workers going for weeks without seeing a paycheck. It also might prevent someone from getting hurt without coverage.

Abbott testified against the bill, worried that the law might allow DOL to shut down an entire job site.

“The general contractor doesn’t want to have to be responsible for everyone else’s workers,” he said.

But the Senate Commerce Committee thought the law was clear enough.

“Our insurance agent didn’t tell us we weren’t covered,” said Alison Areguin, administrative assistant for MBG Enterprises, a Farmington company that is on the Massachusetts disbarment list. “They should have. We told them we work in Massachusetts from day one.”

Areguin found that while Massachusetts is tougher than New Hampshire when it came to enforcing workers’ compensation coverage, the rates are lower too. “There are good things and bad in both states,” she said.

Donahue thinks that is no coincidence.

There are all sorts of reasons New Hampshire rates might be higher. The state has a more lenient treatment policy, resulting in higher medical costs. On the other hand, the state has lower wage replacement rates than most states, and gets workers back to work sooner, resulting in lower indemnity costs. Donahue places the blame on misclassification.

“If you aren’t paying the premiums, and then someone gets hurt, then other businesses end up picking that up,” said Donahue. “That’s why this isn’t just a labor issue. It should concern businesses as well.”