Amid closures around NH, some are still taking the leap into opening new eateries 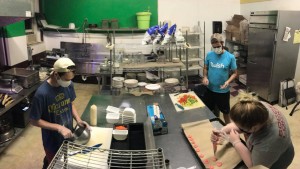 Col’s Kitchen in Concord opened with a skeleton crew during its first week, but owner Jordan Reynolds says he’s hoping to build up to a crew of five after a busy opening. (Courtesy photo)

Even Jordan Reynolds acknowledged that opening a niche vegan restaurant in the midst of a global pandemic isn’t exactly a sound business decision, but that didn’t stop him from opening Col’s Kitchen earlier this month in Concord.

“If there’s anything you can do to support a restaurant that opened recently, recognize that [opening now is] a crazy thing. These guys shouldn’t be doing this … and by ‘they’ I mean me,” said Reynolds.

The restaurant industry has been among the hardest hit by the pandemic. Research from the National Restaurant Association shows that the industry lost $120 billion in sales between the months of March and May due to impacts of the coronavirus pandemic. That number is predicted to reach $240 billion by the end of the year.

The New Hampshire Lodging and Restaurant Association is currently surveying the state to find out exactly how many restaurants have closed since the start of the pandemic. It’s hard to tell now, since not all businesses publicize their closure, but the association predicts that anywhere from 50 to 300 restaurants across the state have already shuttered, according to Mike Somers, CEO of the association and a member of the governor’s economic re-opening task force.

But amid the closures, new restaurants are springing to life. Reynolds’ business has so far been more successful than he had predicted.

“As far as the first week in terms of operating, we ran out of food a bunch. I was running to Market Basket every couple hours,” he said.

He mainly chalks Col’s Kitchen’s success up to a supportive community: not only Concord locals, but vegans across the state and beyond. Reynolds said that due to a lot of social media marketing in vegan Facebook groups and daily videos tracking the restaurant’s progress, he had customers come from as far as Boston and Burlington, Vt., during his opening week.

It wasn’t what he was expecting. In fact, in preparation for whatever might come with opening a restaurant in a depressed economy, Reynolds did as much as he could to cut costs. That meant recruiting local volunteers to help renovate the space in only 19 days, and upon opening, operating with three staff members.

He also let the community know through social media that meals would primarily be takeout only with limited indoor seating. In the first few days especially, Reynolds said business was about 80 percent takeout.

“You don’t expect to make money for a while because of startup costs. But we did very well. I did everything myself with the help of the community,” Reynolds said. “So from that perspective, we’re not going to wait that long to recoup our initial cost.”

Somers, of the Lodging and Restaurant Association, said very few restaurants in New Hampshire have opened since March.

“I think these are establishments that already put plans in motion to open restaurants when all the closures happened,” Somers said. “What we’re seeing now is folks who maybe had intended to open in March or April.”

This wasn’t the case for Reynolds, who had dreamed of opening a vegan restaurant and saw the closure of Willow, the restaurant that used to occupy the same space, as an opportunity.

But it was the case for Miriam Covacs, who plans to start small when launching Broken Spoon, a new Asian fusion restaurant in Franklin slated to open by mid-September. Covacs had already started her business through pop-ups and grab-and-go meals at markets in New Jersey before moving to New Hampshire about a year and a half ago with her husband. She was planning to open her restaurant here long before the pandemic began.

“Restaurants have a 90% failure rate as is, so it’s always a pandemic when you’re opening a restaurant,” Covacs said. “But it’s kind of a blessing in disguise too … I can get my space ready so that it’s a cool place to hang out once it’s safe to do so, but it also gives me the opportunity to just do takeout and not have to worry about all the additional expenses.”

Beyond takeout, Covacs hopes to create interactive at-home experiences with take-home ramen kits and “cater your own ramen party” kits. And like Col’s Kitchen, Broken Spoon will also get its start with a skeleton crew: Covacs is planning to staff the restaurant herself with some help from her in-laws on the weekends.

“I negated going for a loan or anything, because I really don’t know what’s going to happen. And if it’s uncertain as is, I’d rather be down to my own pennies than someone else’s,” she said.

Over the last few weeks, Covacs’ space has been coming alive in downtown Franklin, where many storefronts remain shuttered or empty. Few restaurants currently line Central Street as plans to make Franklin a major tourism hub for whitewater kayaking have been in motion for several years. The city, in partnership with the nonprofit organization Mill City Park, recently got its first whitewater park permit and plans to begin construction soon.

“I’m just excited to contribute to having more in Franklin because outdoor activities are great and a lot of people come here for that, but there’s nothing to make them stay,” Covacs said. “So if no one’s staying, no one’s spending money and investing in this community.”

The restaurant association’s biggest worry right now, Somers said, is the impending fall weather, which will soon limit restaurants that have relied on outdoor seating to stay in business.

“The real critical issue around survivability is going to be, how do we open up or increase our occupancy percentages safely and effectively once we get to September?” he said. The association and the state are discussing implementing physical barriers inside restaurants to increase indoor seating capacity in the winter, he said.

Last week, Gov. Chris Sununu signed an executive order that allows restaurants to operate indoor dining at 100% capacity. But because restaurants still have to maintain a six-foot distance between tables, Somers said restaurant capacities will still be limited.

“It’s not really going to make much of a difference,” he said. “In order for these businesses to survive, we’re going to need to seat at 80, 90% capacity, and how are we going to do that?”