In new NH jobless data, 72% of new claims are in three industries 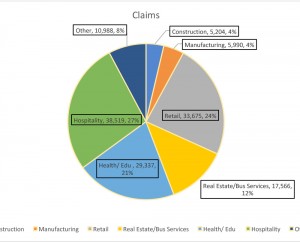 The hospitality, retail and healthcare industries have been hit hardest by the coronavirus in New Hampshire, according to unemployment figures released last week.

So was the North Country. Even though there have been only two confirmed cases of Covid-19 in Coos County, the economic impact of the virus has driven the region’s unemployment rates to 35% or more.

Statewide, the rate (not to be confused with the official unemployment rate) was 13.5% or more.

New Hampshire Employment Security released the breakdowns for the first time even as it shared some good news: The confusion surrounding distribution of the $600 in enhanced federal unemployment benefits has been addressed, resulting in 121,000 beneficiaries receiving more than $100 million.

“In two days, we exceeded what we pay out in 2½ years,” said Deputy Commissioner Lavers.

The department was also able clear up a backlog of some 25,000 applicants whose regular benefits were held up due to one issue or another and have not received any benefits for weeks. Lavers said that the department was up to a 90% payment rate. A few weeks ago it was paying out at a 70

Still, the picture painted in last week’s figures are grim, especially for some industries.

Next was retail, a broad category that includes everything from department stores to gas stations, with more than 33,500 claims (24%), followed by health and education, though those have been primarily involving health services, with nearly 29,500 (21%). Outpatient offices, such as doctors and dentists and specialty clinic, accounted for more than 10,000 of these. Hospitals accounted for nearly 5,000.

Business services, which includes real estate, resulted in more than 17,500 claims (12% of the total).

Less affected were industries considered essential and allowed to remain open – manufacturing, with nearly 6,000 claims, and construction, with over 5,000 claims.

The geographic breakdown – based on claims from March 15 to April 11 – are slightly distorted because they do not reflect the large number of residents in the southern tier who work out of state.

Still, the agency’s Covid-19 Affected Unemployment rate – the rate of new claims compared to the workforce in February – is strikingly high for many towns in the North Country.

These rates do not include claims filed before the pandemic hit the state and national economy in mid-March. At that point, the unemployment rate was 2.6%. So the following rates are in addition to that:

The two towns with the lowest unemployment rates are university towns – Hanover is at 2.6% and Durham at 4.3%.

Faring better was Salem at 9.5% and Nashua at 12%, but that could be because many of the residents affected by layoffs off in those town file in Massachusetts not New Hampshire.

The breakdown did not include how many of the claimants are business owners or self-employed contractors who – for the first time – can apply for benefits.

Under federal guidelines, the department must now give out minimum benefits, even to owners of companies that lost money in 2019 or have not filed their 2019 income tax returns – they “self-certify” that they are a business. (Lavers said that the state will investigate anyone who fraudulently tries to collect as business, resulting in jail time.)

Thanks to the federal CARES Act, the state minimum payment has been increased from $32 to $168, not including the $600-a-week federal enhancement, which runs until the end of July.

With that extra $600, New Hampshire benefits on average would replace 95 percent of income, sometimes even more, a complaint of many essential businesses that find themselves competing with the department in order to bring workers back.

Even so, a recent New York Times article rated New Hampshire as the state paying the lowest amount of benefits – after the federal enhancement — compared to the average weekly wage.

Lavers pointed out that the state had one of the highest average weekly wages in the country. In addition, it has one of lowest benefit levels (60% of wages as opposed to 66%, as in most states, and one of the lowest minimums, even after the federal enhancement) in the nation.

On the other hand, most state are taking even longer to get out the enhanced $600 than New Hampshire.