iCAD focuses on technology of the future 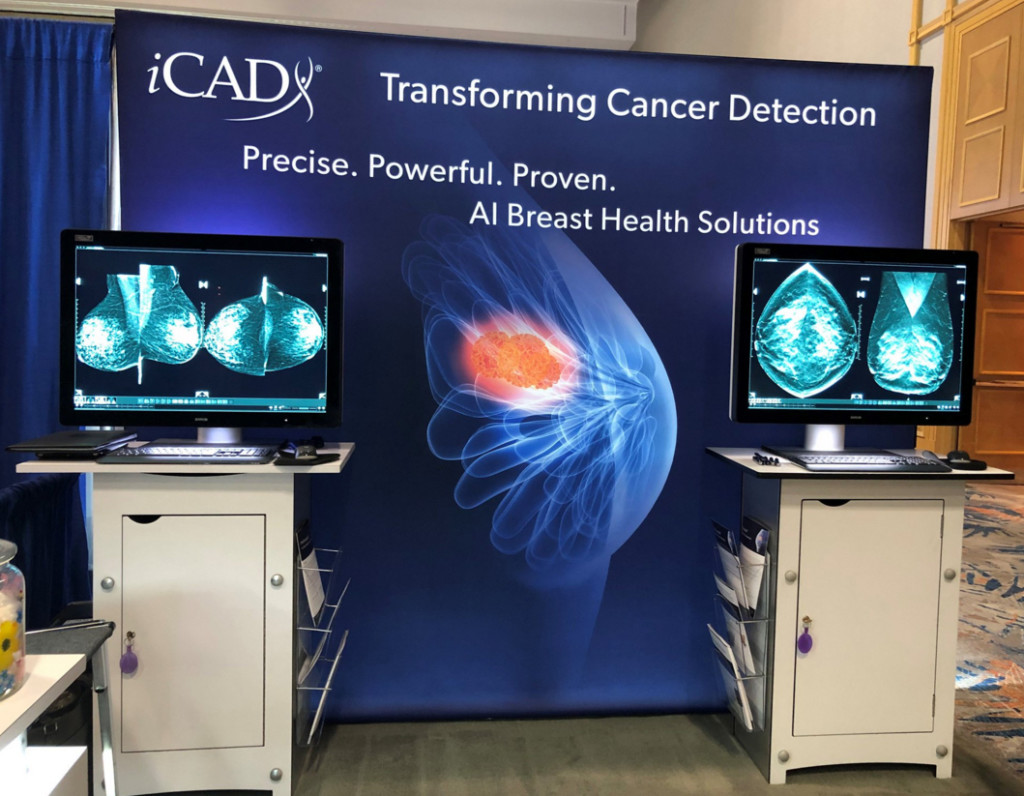 iCAD’s booth at the SBI/ACR 2019 conference.

Radiologists use artificial intelligence to predict your breast cancer before it even emerges.

A robot zaps you with targeted radiation while operating on your prostate.

These are two of futuristic products that iCAD, a Nashua-based radiation cancer detection and treatment firm, dangled in front of investors while telling them about yet another quarterly loss.

Despite a 19% increase in revenue, growing to $7.3 million in the second quarter, iCAD posted a net loss of $3.5 million, or 20 cents a share, compared to a $1 million loss for the same quarter last year.

To be sure, about $4.4 million of that $7.25 million was a paper loss, due to the change the company accounts for “convertible debentures.”  That’s debt that investors can call in as stock, or for more than what was invested, especially if the company doesn’t meet certain conditions.   iCAD had to estimate the changes of such a default, which was 55%, and that risk was taken into account in assessing liability.

One analyst asked whether the company was more interested in “getting cash – cash breakeven? Or is that something we’re still just trying to fill in and invest in, in growing the long-term business,” according to an earnings call transcribed by SeekingAlpha.com

“I think it is the latter,” said CFO Scott Areglado.

“We are currently in this investing for growth,” added CEO Michael Klein.  And later said, “We are running just like a startup company although it’s a public company.”

It’s not that the investments aren’t starting to pay off,

Most of the revenue growth was in the detection business, which shot up by 31%.  And that’s due to the commercialization of “Profound AI” a “deep-learning software solution” that uses data, both internal and external, to enable providers to detect more breast cancers without resulting in false positive, with faster reading times.
The company also invested in its sales force, mainly selling its software technology in 3D detection domestically and in Europe, which mainly uses 2D detection but is ripe for 3D conversion

As the data grows, the company hopes to go, “beyond the detection of cancer under what is currently an age-based screening model and reflects our future effort to move into the exciting realm of being able to predict cancers even before they emerge and are detected,” Klein said.

iCAD is working with the The Karolinska Institute in Stockholm, Sweden to develop the newly “emerging model of risk-adaptive imaging,” which will combine imaging with genetic data that will enable more individual and targeted screening. The company hopes to develop this technology in the next 12 to 24 months, perhaps being commercially available by 2020, though Klein said, “we anticipate having some regulatory work ahead of us.”

Sales in Xoft System therapy, which is now mainly used to treat early stage breast, endometrial cancer, cervical cancer and skin cancer, were relatively flat. However, company officials expect that to change soon because of a new payment model that rewards quicker, more efficient and effective treatment, rather than long drawn-out radiation treatments, though the regulation is still in the comment period.

The company also thinks it would be able to use Xoft technology for brain and rectal cancer, which it hopes to roll out in the next 18 months.

But the big opportunity is in the “exceedingly large” prostate cancer market. The company is working with a robotic surgeon to combine treatment during surgery, treatment that can be done “in minutes versus days or weeks of traditional radiation therapy for prostate cancer.”

To develop such technology, the company took out a $9.4 million loan in June. The good news — that brought up the company’s cash from $12.2 million at the beginning of the year to $19.6 million as of June 30. The bad news is that the company’s liabilities increased by another $5 million to $30 million. But iCAD is trading above $6 a share range, nearly twice it was a year ago, before Klein took over as CEO in November, so shareholder equity has increased.