Mark McEnnis's battle with the virus nearly killed him

Mark McEnnis lives in the middle of the woods in Mason, up a long gravel drive. He’s a burly 39-year-old, with tattoos on both arms: There’s a portrait of Bob Marley, a D11 bulldozer, one of his wife, Pam.

They’ve got three kids, and a pair of Dobermans named Ruger and Dozer.

When Covid-19 started spreading, McEnnis was scared. He wiped down his family’s groceries and took other precautions. But after a while, life more or less returned to normal. He kept working jobs for the excavation company he owned, while his wife stayed home with the kids.

When vaccines became available, he didn’t get one. He said that was for a lot of reasons, including distrust of the government.

“Not to get in the weeds on politics, but it was just new, they were pushing it so hard,” he said. “Just not a lot of faith and trust.”

Plus, he said when other people he knew got Covid-19, they seemed to recover just fine.

“So I’m like, I don’t believe it’s going to affect me in the least,” he said.

But then, in August 2021, McEnnis caught Covid himself — and he got hit hard.

His battle with the virus nearly killed him. He spent months in the hospital. When he got home last December, he was still on oxygen, unsure if he’d ever work again. The experience, he says now, changed his perspective on the pandemic — and made him rethink his opposition to the vaccine.

“The biggest thing was talking to everybody in the medical field,” he said. “You know, the people that I was speaking with before, it was opinions, and a lot of political opinions. And everyone in the medical field said the exact opposite. So I think I’ll stick with the professionals.”

When McEnnis first got sick, he initially thought he had heatstroke from working too hard. Then he tested positive for Covid. He spent a week at home with a high fever, but his wife brought him to Southern New Hampshire Medical Center in Nashua because she was concerned about his oxygen levels.

After about a week in the hospital, the doctors told him he might not survive.

McEnnis was hospitalized in the midst of last year’s delta wave, when ICUs were filling up with severely ill patients, most of them unvaccinated. Some were young and seemingly healthy — people like McEnnis, in their 30s and 40s.

His lungs weren’t working. A helicopter flew him to Dartmouth-Hitchcock Medical Center in Lebanon, where medical staff hooked him up to an ECMO machine — extracorporeal membrane oxygenation — which functioned as a kind of artificial lung, pumping his blood through a device to give it enough oxygen.

The machine would keep McEnnis alive while his lungs had a chance to recover. It was a treatment of last resort, and his odds weren’t good.

“It’s roughly a coin toss under the best of circumstances,” said Don Perreault, a nurse practitioner who helped care for McEnnis at DHMC.

McEnnis spent almost six weeks connected to the ECMO machine. Dartmouth-Hitchcock says that’s the second longest ECMO treatment on record for its intensive care unit. During that time, his body was vulnerable to all sorts of complications.

“Mark had quite a few of those things,” Perreault said. “So, other opportunistic bacterial infections, bleeding complications, organ failure, kidney failure.”

Pam McEnnis, Mark’s wife, was driving hours every day to see him. One day, in October, the doctors told her he wasn’t going to live through the weekend.

“I had the priests come and give him the last rites,” she said. “And I headed home to prepare myself to talk to the kids.”

She called everyone who cared about her husband. A parade of friends visited him over the next two days. Then, something changed. He started getting better.

McEnnis still doesn’t know why. “There wasn’t like, oh, this worked or this didn’t,” he said. “It just — a combination of miracles, I guess. I don’t know.” 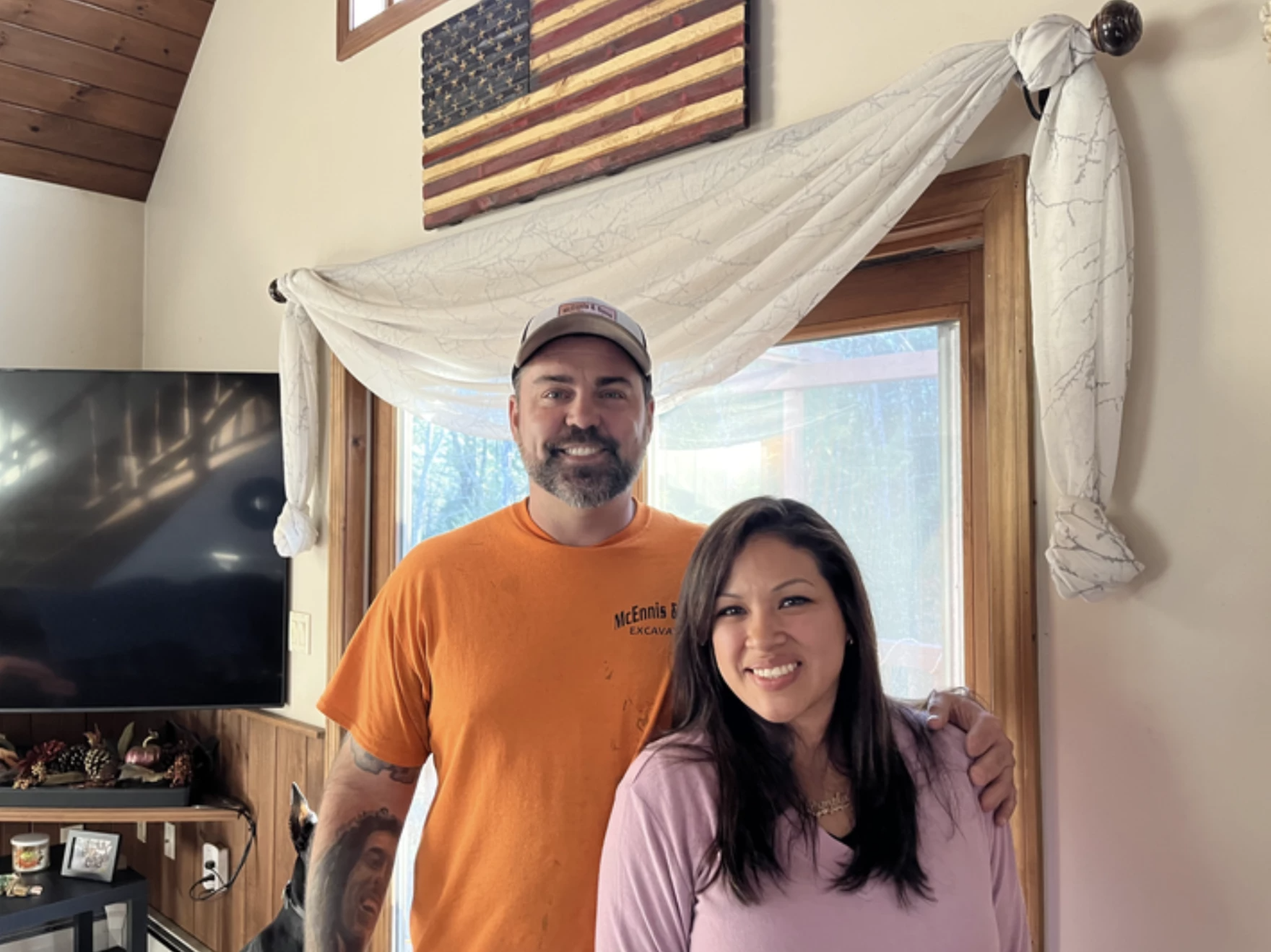 When his medical team took him off ECMO that October, McEnnis still had a long way to go. He woke up anxious and disoriented. At times he felt so threatened he would speak only to his wife, and only in Spanish; she’s from Peru, and they both speak the language.

After so much time under sedation, McEnnis’s muscles had wasted away, and he needed extensive physical therapy to get back on his feet. He was discharged into a rehabilitation facility, where he was supposed to stay until late January. But he was impatient and insisted on coming home in December. He was still on oxygen, unsure if he’d ever work again.

In January, he had four of his fingers partly amputated, a result of tissue damage from them getting too little oxygen during his illness. He had to relearn how to floss and cut food. He likes to hunt and shoot, and that’s gotten harder with part of his trigger finger missing.

And soon after coming home, McEnnis got the Covid vaccine.

“I was very afraid to get Covid again,” he said. “So after all I had been through, the shot didn’t really seem like a big deal anymore.”

He wasn’t the only one who had that thought. He says maybe 50 people he knows went and got the shot after seeing what the virus did to him.

Covid-related hospitalizations are down compared to when McEnnis was battling the virus, but public health experts have warned of another potential winter surge — in part because of lagging vaccine uptake. Just 10 percent of eligible Granite Staters have gotten an updated bivalent booster shot this fall.

McEnnis doesn’t think people should be forced to get the vaccine. He said friends of his have lost jobs for refusing to be vaccinated. But for him, the stakes of that choice are clear.

“I mean, if you’re willing to roll the dice on your life, then that’s your decision,” he said. “But I would say, probably get it.”

Today, McEnnis is back to work and feels pretty good. The whole thing kind of seems like a bad dream.

“Things are definitely put in perspective when tomorrow’s not an option,” he said. “It really hits hard. Just watching the boys grow up in the past year, how much my boys have grown up — to miss that would have been terrible.”