Once upon a time, before the Affordable Care Act was enacted, there was no competition in the individual health insurance market in New Hampshire. Today, there are five insurers, two of them federally seeded organizations known as CO-OPs. 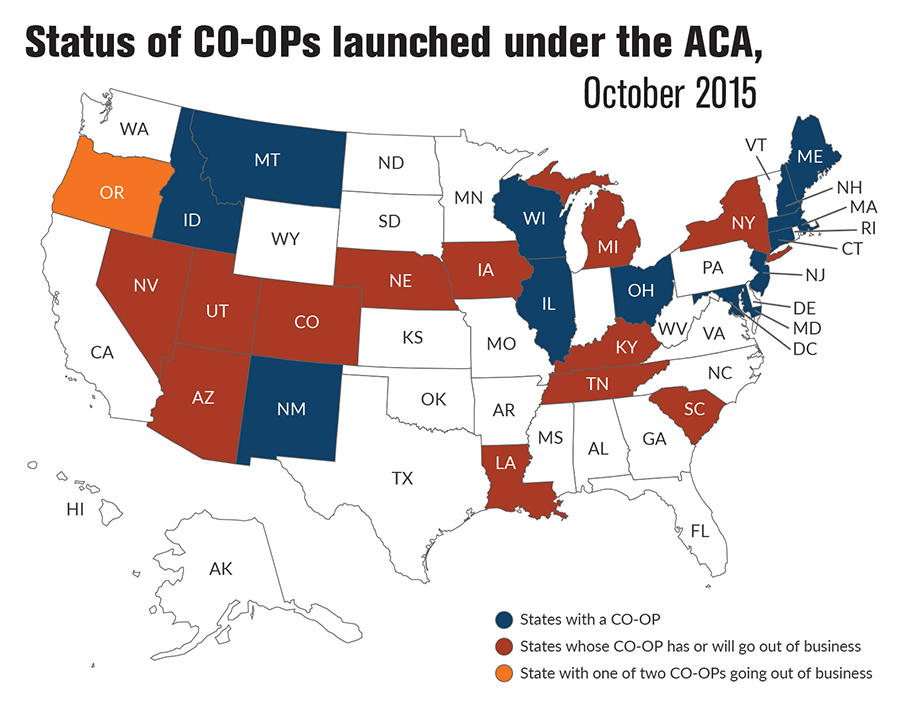 But the CO-OPs have hemorrhaged millions of dollars for different reasons, reflecting similar troubles such insurers are having all over the country.

One of the insurers, Maine Community Health Options, lost some $73 million in 2015, and as a result, stopped writing individual policies because of unexpected claims. Minuteman Health, based in Massachusetts, lost $43 million last year, though it has more money in the bank.

Both insurers insist they will survive and thrive in the coming years.

Under the ACA, the CO-OPs, short for Consumer Operated and Oriented Plans, are nonprofit insurance companies that have been capitalized with a total of $2.6 billion in low-interest loans. Some 23 were formed, but since then a dozen, including Community Health, were forced out of the federal health exchange in 2016.

Ray White, owner of Bedford-based Cornerstone Benefit & Retirement Group and a former Republican state senator is no ACA booster, but he does appreciate the competition it has brought to the state. That competition reduced the market share of Anthem – once the only player in the individual market – to about a third.

“I’m excited by it,” said White. “I’m rooting for Maine Community Health to make it, for Minuteman to make it. As an agent, it’s like Best Buy. It’s good to have different product on your shelves.”

White is rooting for Community Health for another reason: It’s his company’s group insurer.

CO-OPs aren’t the only reason for the new competition in New Hampshire. Since entering the individual health insurance market last year, Harvard Pilgrim Health Care has grabbed a 17 percent share, and expanded Medicaid has thrust Centene’s Healthy Families into second place, with a 23 percent share. Both of the CO-OPS, which didn’t even exist three years ago, captured a quarter of the individual market. And while Minuteman’s share of the group market is relatively small, Community Health has slightly more group members in the state than individuals.

Community Health was once the poster child of an ACA CO-OP. Capitalized with $132.3 million, it earned $7.3 million in 2014, the only CO-OP to make a profit that year. It quickly became the largest insurer in Maine, with 75,000 policyholders by the end of 2015. It entered New Hampshire at the start of 2015, eventually signing up every hospital in the state and growing to over 6,000 policyholders – 9,000 with Medicaid recipients included.

But in August 2015, it projected a $3 million loss for the year. In late October, that projection grew to $17.2 million. Then in March, the projected loss grew to $74 million (the figure includes a $43 million premium deficiency reserve for 2016.)

The sharp increase in claims was “unexpected,” said Community Health spokesperson Mike Gendreau, but his company is not alone, he said.

Other, larger carriers saw a “pent-up demand” coming from the formerly uninsured who had been putting off treatments for years, but they “have been around for decades and can weather the storm better,” he said.

Gendreau emphasized that meeting that demand is a good thing. “Millions who did not have coverage before now have coverage that is affordable.”

But the Maine Bureau of Insurance grew worried at the situation, fearful that the company wouldn’t have enough money to pay off its claims.

“Regulators don’t like surprises,” said Eric Cioppa, superintendent of the bureau, so in late December, the bureau got Community Health to agree to stop marketing to new members, but it was too late to stop people from signing up through the federal exchange. Another 10,000 were added to the rolls. In March, Community Health had nearly 10 percent of the New Hampshire individual market.

The Maine Insurance Bureau tried to put Community Health into receivership, but the federal Centers for Medicare & Medicaid Services said that was against federal regulations. So for now, the bureau has simply been watching the company closely.

So far, so good. The insurer has cut expenses by $11 million and in its latest monthly update, the Maine bureau reported that Community Health’s claims were consistent with projections and it had more cash then expected.

“Our plan is working,” said Gendreau. “We are confident in the future. We will return to a positive financial result in 2017.”

Massachusetts-based Minuteman Health also entered the New Hampshire market from a neighboring state and also suffered heavy losses in 2015, but not because of any surge in claims data. Instead, it was due to an obscure federal rule that hurts rapidly growing companies that keep their costs down, according to Scott Colby, Minuteman’s New Hampshire-based vice president of regional operations and executive director.

Minuteman is certainly rapidly growing, particularly in New Hampshire. The carrier went from 7,300 to 13,500 members (a increase of 86 percent) in a year. Include Medicaid expansion, its policyholders more than doubled, to 16,400. It has about 17 percent of the individual market.

Minuteman differs from Community Health in a number of ways. First, although the two started about the same time, Minuteman was not formed in response to the ACA, Colby said.

“We are not really a CO-OP,” he said. “We are a provider-sponsored health plan that received CO-OP financing, because at the time it had the best interest rate.”

Minuteman is an offshoot of Tufts Medical Center and is an example of the kind of provider-insurance alliances that are springing up around the country. (Harvard Pilgrim’s Elevate Health is another).

Minuteman also formed a narrower network, signing with 13 hospitals and about 100 providers in 2015. It only added one hospital the following year, but tripled the number of providers.

“We started out as a skeleton, but we put a lot of meat on the bones,” said Colby, who stressed how the company’s discipline enabled it to cut costs and keep premiums low.

Colby calls the loss it has reported an “accounting loss,” but it is actually real money that the company has to put aside because of something called the “risk adjustment.”

Under the ACA, the federal government wants to encourage insurance companies to cover a sicker population. Risk adjustment requires those carriers with healthier populations to pay them to do it.

According to one analysis, this led to 200 insurers having to transfer $1.75 billion nationwide to 260 issuers on the individual market.

Colby says Minuteman supports the concept but has problems with the way the transfers are being calculated, a concerned echoed by many CO-OPs

First, the government bases its risk rating on claims data, which rapidly growing insurers don’t have on new customers. Thus, people with chronic illnesses who haven’t yet been to a provider’s office are considered healthy.

Minuteman has asked the federal government to include prescription information to capture that population, so far to no avail.

“If I am getting diabetes medication, it means I have diabetes. I’m not feeding that stuff to the pup,” Colby said.

Second, federal regulations base the percentage of the risk adjustment on market-based premiums as opposed to the premiums actually collected.

“Our premiums are lower. This is a good thing right? But we are getting penalized for being lower-cost,” Colby said.

For Minuteman, its the risk adjustment payment was $3.1 million for 2014, more than three times the amount expected, and that contributed to a $1 million loss in 2014.

But in 2014, Minutemen hadn’t yet entered the Granite State market, and sales in Massachusetts were slowed because of computer problems on that state’s exchange.

However, the company grew very quickly in 2015, and it had to set aside $17.6 million for risk adjustment that year, with an additional $22.6 million for 2016. These payments, if they are made, will go to the more established competition, like Anthem and Harvard Pilgrim, and the new carrier on the block, Centene, which has claims data, since it has already been serving the Medicaid population.

Minuteman can handle this in the short term because it has about $100 million with risk-based capital of 621 percent, about twice what is required. And it is doing the best it can to document illnesses by getting new policyholders in to see providers.

Colby also said that growth in the individual market should stabilize more over the coming years. Still, he added, such large payments would make it tough to continue if the rules aren’t changed.

New Hampshire’s expanded Medicaid could make it even more difficult for Community Health and Minuteman Health this year, because it has resulted in 44,000 more individuals on the ACA exchange, doubling the size of the individual market.

The state had already expanded Medicaid for 2015, adding those that made too much to qualify for Medicaid but not enough to afford the ACA. But last year, the population was insured by traditional Medicaid. This year, Medicaid pays their premiums to enroll on the exchange.

More than half of the recipients stayed with Centene’s subsidiary, NH Healthy Families, as it joined the exchange. The rest were able to pick other insurers, and if they didn’t were assigned to one.

Harvard Pilgrim received most, about 20 percent, followed by Anthem, with 15 percent. The two CO-OPs roughly split the last 13 or so percent.

Harvard Pilgrim’s full network will feel the greatest impact. Most of its policyholders have chosen the narrow network discount, but much of the Medicaid population has chosen the full network.

Similarly, Community Health, with its large network, attracted a lot of new policyholders, about a third of whom are due to expanded Medicaid. Most experts expect that this population will have more costly health issues than a more affluent population, so Community Health’s claims could rise again in the later half of 2016.

Minuteman will receive the same number of Medicaid recipients as Community Health, but since its market share is larger, the new policyholders will constitute less than a fifth of its individual membership in New Hampshire. Thus the impact on claims won’t be as great, but the aforementioned risk adjustment will “take a flawed program and make it worse,” Colby said.

Since the population is new to Minuteman, the recipients will be considered low risk until the claims come in. Also, Centene’s premiums will bring the state’s market rate up.

The insurers will also be paying for Medicaid expansion in another way in 2017, the year the federal government will stop paying the full share of expanded Medicaid, and instead cover 90 percent.

The NH Legislature balked at paying the 10 percent, so insurers and hospitals promised to do so. Insurers will have to pay a “voluntary” assessment – their part of a $17 million contribution, based on both individual and group market shares. Since Minuteman’s group share is pretty small at the moment, “it’s nothing compared to the risk adjustment,” Colby said.