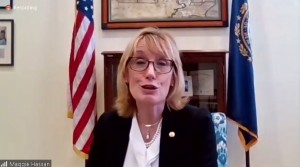 U.S. Sen. Maggie Hassan talked with New Hampshire entrepreneurs to assess the ongoing impacts of Covid on their businesses.

U.S. Sen. Maggie Hassan, D-NH, invited several small business owners and small business advocates to an event on Monday to discuss the impact of Covid-19 on their businesses and consider strategies for the future.

Hassan’s New Hampshire Entrepreneur Forum, now in its third year and online for the first time, began with an update from Hassan on the bipartisan framework on a Covid-19 relief package released last week.

Hassan said that the compromise plan likely wasn’t going to be enough to fully jump-start the economy, but it does include vital support for many affected by the pandemic. Later in the forum, she mentioned that there are concerns with the compromise plan from both sides of the aisle as well as other needed items that cannot be addressed in the plan, but she did not elaborate on those concerns during the forum.

One topic she did mention in the relief proposal was the inclusion of an additional $300 per week in support for unemployed workers. Panelists noted that the $600 provided earlier in the pandemic made it difficult for employers to regain low-paid workers. Hassan, who supported the $600-a-week payment said she also supports the $300 per week additional benefit as an acceptable compromise. She also noted that the pandemic has shown that many states have overly antiquated unemployment assistance systems.

She also provided an update on Project Warp Speed, which she hopes can provide an end to the pandemic once and for all.

Although she said the Food and Drug Administration would not approve any proposed Covid-19 vaccine without looking at data first, she said she expects the Pfizer vaccine to be approved on Thursday and the Moderna vaccine to be approved next Thursday. She added that both came from a scientific foundation that had been built over many years.

The senator also pointed to legislation she has introduced to provide student debt relief to entrepreneurs.

Carla Vanderhoof, co-founder and chief design officer at addapptation in Exeter, said that the pandemic was a mixed experience for her business, which builds apps.

She reported that many expected contracts dried up as her clients began to focus on essential needs and her business focused more on marketing-based and self-service “freemium” digital items.

While Vanderhoof expected to make that shift over the next two years, it proved to be a struggle, since her company was not ready for the change to occur just yet.

Steven Graves, president of Measured Air Performance in Manchester, reported a similar experience in regard to clients postponing work from his business, which measures energy efficiency in laboratories.

Ultimately, Graves said the Paycheck Protection Program saved his business and hopes an additional relief package can provide additional cushion until normal business picks up again, but ultimately what he’s looking for is the ability to plan ahead.

“I can take good news, I can take bad news, what I can’t take is uncertainty,” he said.

Like Vanderhoof, he also said the pandemic has forced him into new efficiencies that may not have been recognized before the pandemic, such as utilizing remote meetings more often instead of travelling when it comes to serving clients.

For Jay Curcio of White Apron Catering in Dover, the pandemic has provided a much more dire outlook. He stated that he lost 60 catered weddings over the summer, each of which would have provided $20,000 to $25,000 in revenue.

Although he’s tried to adapt, given the lack of in-person events needing catering, his current location has made that difficult and the low profit margins in his industry have made it even harder.

Even with the PPP and other grants, he only managed to retain three of his eight full-time employees, and says it may be difficult to find new employees in the spring. However, his business may not survive until the spring without further relief from Washington.

“We’re definitely in desperation mode at this point,” adding that Hassan “mentioned reaching across the aisle and providing more stimulus. I hope that happens, I hope the adults in the room are able to do that and make that happen,” he said.

Kristiansen said she hopes the state can restart a unified strategy to help small business owners in New Hampshire comparable to the Live Free and Start initiative Hassan undertook during her time as governor.