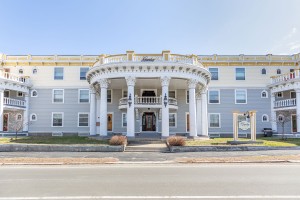 The Gresley Residence on Chestnut Street in Manchester.

The historic Gresley Residence has been named this year’s recipient of the Restoration of a Historic Landmark Award from The Manchester Historic Association, which annually presents the Historic Preservation Awards to recognize and support individuals, businesses and organizations that have made significant contributions to the preservation of buildings, neighborhoods, traditions and other historic resources in the city.

The Gresley Residence involved an extensive renovation project that began in 2015 and included restoration of all 39 residential units and other exterior, interior and landscape remodeling. Matt Menning, owner of The Gresley Residence and principal at Elm Grove Companies, spearheaded the renovation, which included custom replacement cedar balusters by Jeff Roberts of J.S. Roberts Furniture Maker and Carver of Unity and custom stained-glass elements designed by Annette Burgess at Detailed Stained Glass in Concord.

It presented the Century Club Award to the Red Arrow Diner, which is celebrating 100 years of operation in 2022. Robert B. and Claudette O. Perreault won the Homeowner’s Award

Nominations for the 2023 Historic Preservation Awards are open. For more information, visit manchesterhistoric.org. Deadline for nominations is Dec. 3.