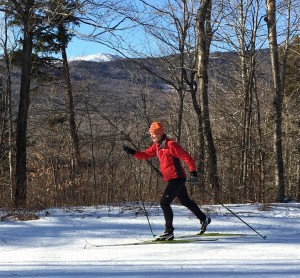 A couple of outdoor recreational activities should see a substantial uptick in interest this winter season in New Hampshire.

Provided Mother Nature cooperates, cross-country skiing and snowshoeing are ripe for an even bigger rise in popularity, due in part to the Covid-19 pandemic.

According to the Cross Country Ski Area Association, more than 5.2 million people cross country skied in the United States during the 2019-20 season, a 6% improvement from the previous season. The percentage increase in snowshoeing participation was double that – a 12% bump, to 3.6 million.

With the uncertainty of how downhill ski areas will look and run this winter, as well as the surge of people yearning to get outside to avoid cabin fever – activities like bicycling, hiking, camping and water sports saw huge participation increases this summer in the Granite State –- downhill ski area visitors could be opting to avoid the crowds and enjoy the solitude in the woods.

Great Glen Outfitters, the retail store at Great Glen Trails on the Mt. Washington Auto Road in Gorham, has already seen customers who are making the switch to cross-country skiing and snowshoeing, despite only being open on weekends since the start of November.

“There has been a shift in customer base. We are seeing more folks that want some rugged Nordic setups for backyard romping,” said Nate Harvey, store manager. “Now they are nervous about the alpine area’s capacity and being shut down so they are buying up the (Nordic) goods.”

While downhill ski areas could see fewer visitors than past seasons, due to social distancing and limited ticket sales, cross-country trails and equipment stores will reap the benefits.

“We are thinking that what we saw with bikes, camping equipment, kayaks and things of that nature (this summer) –

sports that have an up-front cost to buy gear, then little participation fees – we will see [that] with cross-country skiing and snowshoeing,” said Dylan Jones Hall, executive vice president/minority owner of Ken Jones Ski Mart in Manchester. “We think they are a sure bet in New Hampshire this year. Even if you don’t have snow in your backyard it will only be a 30- to 60-minute drive to do these sports for free.”

Ken Jones anticipated the surge after what it saw at the end of the past winter season, when the coronavirus first hit, and decided to make a change in its store. Over the summer, the 52-year-old company decided to create the Outdoor Center at Ken Jones, replacing and renovating the 1,000-square-foot Burton Learning Lodge with a space to sell cross-country skis and equipment and snowshoes.

“We haven’t been in the snowshoe or cross-country market in probably a decade,” Hall said. “We didn’t have the space at the time to represent the categories well.

“As we were going through the (coronavirus) shut down (in April) we were thinking about what the season will look like moving forward. We asked, ‘What is something we can do to be better for the community we serve?’ Cross-country skiing and snowshoes came to mind for sure.”

Offering cross-country skis and equipment and snowshoes is one thing. Having the inventory has been a totally different story.

Hall said the store is in good shape, with most sizes and styles available. But that could change in an instant.

“If we get snow pre-Christmas we probably will sell everything to the wall,” said Hall. “If not, we can stretch what we have into January. But the time is now. Seeing what happened with bikes, kayaks and camping equipment over the summer, cross-country (skis) and snowshoes could be in the same situation. If you wait until past Christmas it might be too late.”

Jaycee Clark, owner of Norm’s Ski and Bike Shop in Keene with his wife, Patty, is already seeing bare inventory. It is similar to his bicycle selection this summer as he still has 450 bikes on back order.

Clark has been trying to place an order for cross-country skis for the past month but is having no luck.

“I think we are going to have a lot of similarities to the summer,” Clark said. “The companies that sell the product to us have already sold out most of their Nordic equipment for the year. One company told me that any order put in after June won’t see any skis at all. What we got is all we’ll see all year.”

At Omer and Bob’s in Lebanon, the Nordic ski inventory is holding up and the store bumped up the amount of snowshoes available. The results have been brisk pre-season sales and improved numbers from last year.

“We’ve been busy in October and November for sure,” said Johnny Wilmot, co-owner with Breck Taber. “If anything, Covid bumped up (sales) a bit. People need something to do when they can’t do what they normally do like travel or get together.”

Omer and Bob’s did have to nix its annual consignment sale. Despite the obvious interest, Taber and Wilmot decided they wouldn’t have had ample space for customers to properly social distance and be safe.

Business began to pick up for William Novacek of Coos Canoe & Snowshoe, an independent, one-man business in Lancaster, at the start of September. While his output is meager compared to bigger companies, he has made a dozen snowshoes so far, compared to an average production of six at this point in the season.

Novacek feels snowshoeing has staying power even after the pandemic.

“When someone gets outside in wintertime, winter gets a lot more enjoyable and less tedious,” said Novacek, who makes handmade traditional snowshoes out of Ash wood frames and rawhide. “There was a family that used to live next to us, and they were overweight and hated to be outside during the winter. I gave snowshoes to the boy and everyone in the family starting using them. After that, they liked winter and they got exercise and did something healthy as a family.

Ski NH, a trade organization representing 30 downhill and cross-country ski areas in New Hampshire, is making sure that both Alpine and Nordic skiers are aware that the look this year will be different.

Shannon Dunfey-Ball, Ski NH’s marketing and communications manager, said the organization is “working with the Department of Travel and Tourism Development, as well as local chambers and other tourism organizations in the state, to spread the word that this will be a different ski season than any other previous season and that people should expect and prepare for those differences.”