Every project has its own particular challenges, whether it’s permits, access, deadlines or any number of unforeseen hurdles.

However, Eckman Construction’s expansive project for the U.S. Department of Labor on Hackett Hill in Manchester presented a uniquely New Hampshire issue: granite. A lot of it.

The project, the New Hampshire Job Corps Center, is a 152,000-square-foot, seven-building campus made up of high-performance buildings, including dormitories with 268 beds for on-campus living, an education building with classrooms, a gym/recreation facility, dining commons with a culinary arts teaching kitchen, a wellness/administration center and a welcome building. The center will serve students 16-24-years-old who will spend an average of eight months earning a high school diploma while learning skills that can launch them into a career.

Before any of that could happen, however, there was the issue of the granite.

“The site is approximately 25 acres of which we developed about nine or 10 acres,” Eckman Construction Vice President Preston Hunter said. “It’s a very hilly site, as the name would imply – Hackett Hill. And there was a preponderance of ledge on the site, which is not surprising given that we live in the Granite State.”

In order to develop what has become a seven-building New Hampshire Job Corps campus, an extensive amount of blasting was needed. Work began in May of 2013 with clearing, and as initial geotechnical explorations found, there was a substantial amount of ledge removal that would have to take place to prepare the site for the Bedford-based Eckman to begin construction of the buildings.

“We spent a good portion of the summer of 2013 blasting the ledge and then crushing and processing it on-site,” Hunter said. “In the end, 90,000 cubic yards of ledge and rock was removed from the site in order to make way for the buildings. 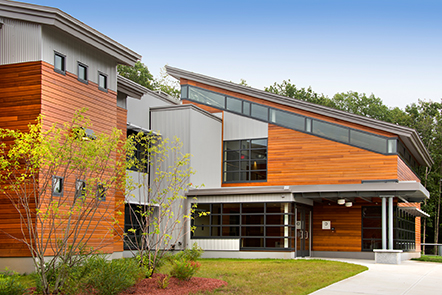 The crushed rock was reused on-site, where possible, as structural fill.

The other detail that necessitated creative and open planning was its relatively close proximity to a residential neighborhood.

“There were three homes across from the construction entrance,” Hunter said. “It was important for our construction supervisors to develop relationships with our neighbors, so from day-one our general superintendent went over and visited with those neighbors to let them know what was going to be happening. We worked with them to minimize inconvenience and disruptions as much as possible. They were very cooperative and I’m sure they’re happy the blasting and construction is done.”

The company’s expertise with the local industry helped play a role in Eckman winning the bid, Hunter said.

“We had a leg-up from day-one, because it’s in our backyard with our knowledge of the local subcontractor market,” he said. “We know who the qualified ones are and those who are not necessarily a good fit for a project of this scale. It helped the project go smoothly and helped on bid day as well, where our pricing was more competitive because of our relationships with the local subcontractor market.”

Initially, the federal bid included a Project Labor Agreement that necessitated union workers on the job. There were only three bids on the project, and it was not awarded. It was later reissued without the union requirement, which dropped the cost by over $6 million. Eckman’s winning bid came in at $31,635,000.

Construction wrapped up in January of this year, though minor additional work – such as installing things like closet rods and various odds and ends – will continue up to the planned September opening.

Eckman Construction, a 41-year-old construction management firm, conducts the majority of its business in New Hampshire. It’s currently working on a number of projects, including a regional training institute and barracks facility for the New Hampshire Army National Guard in Pembroke; an assisted living facility in Salem; additions and renovations at the Mascoma Valley Regional High School and two multi-family housing projects – one in Manchester and one in Laconia. Eckman is also supporting the design phase for a luxury apartment building and mixed-use facility in downtown Portsmouth.