As it turns 100, the iconic Red Arrow Diner celebrates its history

It all started with the Red Arrow Garage in 1911 at 73-77 Lowell St. in Manchester selling and servicing “Cadillac Motor Cars” for the Fitz-Dillingham Company.

David Lamontagne liked the name, and in 1922 the Red Arrow Diner opened its doors at 61 Lowell St. The diner has become as prized and historic as a classic Cadillac.

“Kevin Costner sat here,” reads a metal plate on the crown of one of the 10 wooden benches the diner has for its five booths, accompanying 18 classically padded bar stools. It’s one of dozens of tags on the benches noting comedians and candidates, the famous and the 15-minute famous.

Celebrities will be in attendance on Oct. 15 from 11 a.m. to 2 p.m. as the diner throws its centennial party, but the day is designed for everyman and his or her children as the event is free to the public. Descendants of David and Mabel Lamontagne will be on hand.

Mabel Lamontagne celebrated her own centennial in 2007, and Lawrence counts it as a thrill to have accompanied her to a dinner where the Red Arrow was designated as a landmark. Clowns will be at the open-to-the-public event, perhaps headed by chief clown Adam Sandler. There will be games for children and keepsakes commemorating the centennial including a pewter ornament of the diner created in conjunction with the Manchester Historic Association. The diner is closing its Londonderry, Concord and Nashua locations for the day, so that employees and their families can attend the Manchester event.

(Red Arrow commemorative mugs and T-shirts are now on sale.)

Food will be in attendance, too. Proceeds from the $5-a-plate special will be donated to nonprofit neighbor Waypoint.

“I’ve seen people who met at the diner,” Carol Lawrence said. “And then they get engaged at the diner. They get married and have kids, and the kids are taller than me. What the heck happened?”

With half a million breakfasts served annually at the four locales, names can take second place to a customer’s favorite dish.

“A waitress will tell me, ‘Did you hear? Dry pot roast died,’” George Lawrence, Red Arrow vice president and father of Carol, said. “We know them by what they eat. Over hard bacon and toast. He’s gone. He’s in the hospital.”

Leading up to the celebration, the Red Arrow has offered a Dinner of the Decade each month, looking at each decade to see what was popular fare. 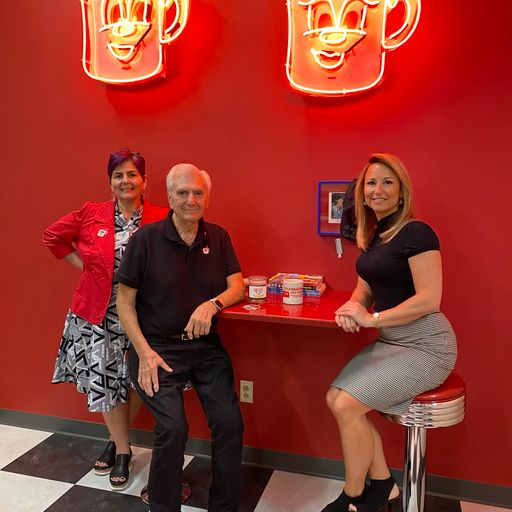 “The carrot cake has been the most popular one by far,” Carol Lawrence said. “That was the 1970s. We had to make 35 carrot cakes for the month and that was what we normally had for the year. They tried carrot cake, but they hadn’t tried our carrot cake.”

The January dinner, echoing what was big in the 1920s, featured Italian meatballs, whoopee pies and grilled cheese sandwiches. February was spaghetti and meatballs for $6.97.

A classic diner can advertise itself. “Regular people travel to take a picture of themselves in front of the diner,” the elder Lawrence said. “This is all the time. This morning, there were two people.”

“When I started to go over there, we had a special board with a blue plate special,” Carol Lawrence explained. “I went out and bought blue plates, but anything we put on the board, and we came up with these crazy specials … we came up with a hash brown special, and it was like ‘I don’t know, do you think it’s going to sell?’ but anything we put up there sells. A kid’s meal got served on a blue Frisbee and that was popular, too.”

Testimonials from celebrities adorn the diner’s walls. The rock group Barenaked Ladies signed their photo, “It’s all about the wieners and beans!” 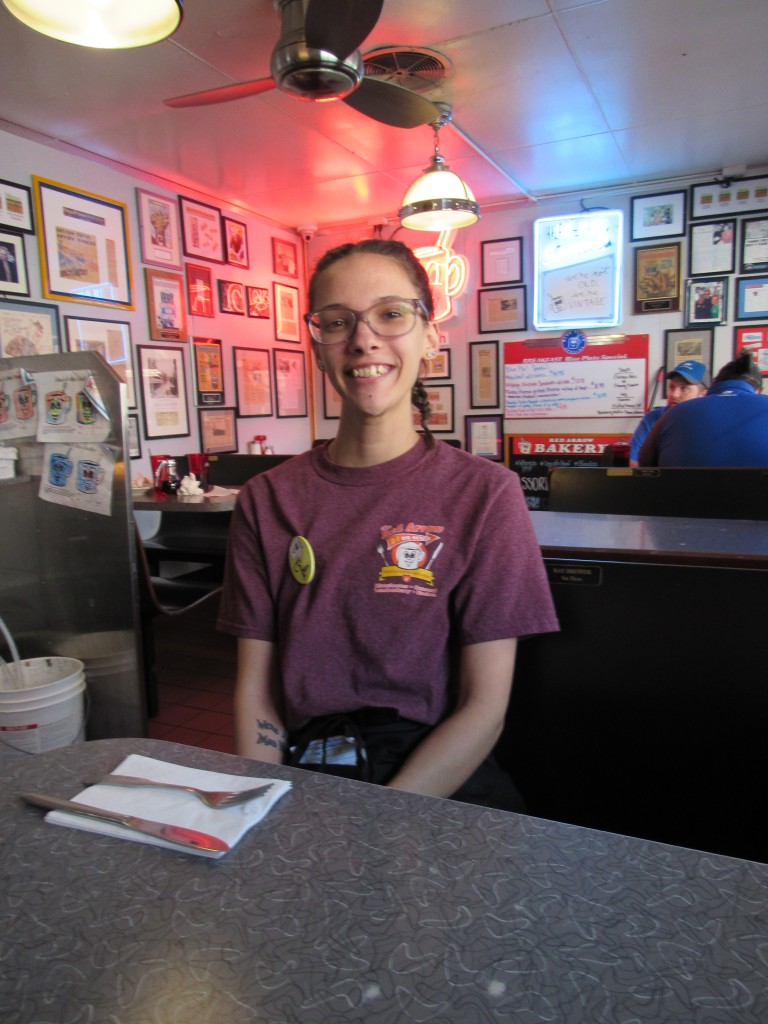 An interview at the diner with front-end house manager Emilia Morrissette was punctuated by the daily workings of the operation. A loud drill attacked the floor tile next to the booths as the first step in installing a new sink. The workman apologized for the noise, but a customer replied, “He’s fixin’ the thing. That’s OK. You’re just doin’ your job.”

Morrissette addressed a customer’s comment about the Red Arrow marquee that’s been in operation seven years. “George, I know you love neon. Can you tell it’s LED?”

Carol Lawrence said the sign came from George’s Apparel on Elm Street and a metalworker reshaped the letters.

Morrisette is one of many who has worked her way up the diner’s ladder. Chief Operations Officer Amanda Wihby started as a part-time receptionist and now runs daily operations. She was made a full partner two years ago. Wihby was named Restaurant Employee of the Year for 2017 by the NH Lodging and Restaurant Association.

“Anival Pasqual has been with us 20 years, and his wife is the baker for our Manchester store,” George Lawrence explained. “He started when he was single and now he has three children. He’s general manager of the Londonderry location because of his knowledge of food. David Carter, he says he’s been with us 30 years, makes all of our homemade soups in Nashua. He’s very diligent and it keeps the food consistent.”

The company offers benefits and bonuses that are rare in the restaurant business.

‘And there I was’

The Red Arrow Diner menu reads like a novella. A recent Blue Plate offering was an Asiago chicken sandwich with a side for $12.75, while the Queen Dinah is a standard breakfast offering. That’s two eggs, two pancakes, two sausages, pan fries and toast for $14.75. The pies are “too numerous to list,” according to the menu.

The major challenge Manchester’s Red Arrow diner faces is getting enough employees — nothing new in today’s business climate. The diner remains open 24/7. “We need two cooks, two servers and a dishwasher,“ George Lawrence explained. “We have seats, but not enough cooks.”

The four Red Arrow restaurants employ approximately 150 people. Not bad for a business Carol Lawrence didn’t have on her radar in the 1980s.

“I wasn’t looking for it,” she said. “A family friend reached out and said … well, he took me to the Red Arrow. I was upset with myself that I didn’t know the Red Arrow. I was 23 years old and he said, ‘Do you want to run this business?’ and I said, ‘I have no money. How’s that going to happen?’ And then I got my dad involved and, next thing you know, there I was.”

The elder Lawrence and his wife ran the Belmont Hall restaurant in Manchester for many years.

The Red Arrow has been featured on the Food Network and, who knows, there could be a metal nameplate with your name on it waiting to be affixed, even if it’s just for 15 minutes.