For some bills, the legislative session is just beginning 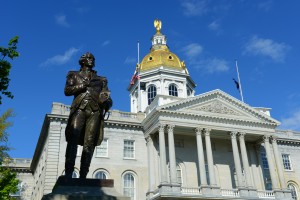 While the New Hampshire House and Senate wrapped up their legislative session on June 24, close to 200 bills are still “retained in committee” in the House. Committees will have a chance to work on these bills over the summer and fall, before the Legislature reconvenes in January.

Sometimes, committees retain legislation as a polite way to kill a bill or make way for an alternate proposal. Other bills retained in committee get significant work and emerge as flagship legislation the next year. Here’s a rundown of some of them.

There are two marijuana legalization bills retained in the House Criminal Justice and Public Safety Committee, ready for debate in the coming months. House Bill 237 would legalize and tax marijuana for adults over age 21. HB 629 would legalize possession of up to a quarter-ounce of marijuana for adults over age 21 and allow home-growing, but not sales. A third bill, HB 526, would lessen the penalties for personal possession of marijuana.

In contrast, when asked about a 300-vote discrepancy between hand-counted and machine-counted ballots in Windham this year, Governor Sununu said, “A discrepancy of 300 votes out of over 800,000 cast does not constitute ‘massive election fraud.’ In fact, it is proof that New Hampshire’s voting process is the most reliable, safe, and secure in the country, and that we will ensure every last vote is accurately accounted for.”

(A forensic audit of the Windham ballots and voting machines later identified a problem with how the machines read folded ballots.)

While Governor Sununu touts the security of New Hampshire’s elections, that doesn’t mean he would automatically veto any changes. This year’s budget process has shown that Sununu can be very flexible on his policy positions; he is poised to sign a budget that includes emergency power restrictions and other policies he once opposed.

Accommodations for pregnant and nursing employees

This year, the Senate passed two bills that would require employers to accommodate pregnant and nursing employees. The House Commerce and Consumer Affairs Committee retained both of those bills, Senate Bill 68 and SB 69. The Senate pushed to get the bills over the finish line by adding them as an amendment to HB 610, but representatives refused that change, arguing that the bills needed more work in committee.

Proponents of SB 68 and SB 69 argue that women need this protection and support to return to work – especially in light of New Hampshire’s workforce shortage. Opponents argue that the Human Rights Commission already works to prevent discrimination against pregnant and lactating employees, and these bills could burden employers.

The governor backed similar legislation in 2020, but that bill died during the Covid-19 legislative shutdown.

This year, House budget negotiators nixed a Senate plan to provide dental coverage under Medicaid, arguing that the House didn’t get enough time to examine the costs. HB 103 was a separate bill to add dental benefits to Medicaid; that bill was retained in committee and could be the vehicle to move the plan forward in 2022.

Opponents argue that the costs of dental coverage are still unclear.

Governor Sununu vetoed a similar bill in 2020 over a potential $11 million price tag, but says he supports the concept of adding dental coverage to Medicaid.

New Hampshire redraws its electoral districts based on U.S. Census data, but due to Covid-19, that data was delayed this year. Legislators won’t get detailed population data until September, so all of the House redistricting bills are retained in committee.

New Hampshire GOP Chairman Steve Stepanek said Republicans will redraw the districts to favor their party, particularly in the 1st Congressional District. With Republicans controlling the state House, Senate and governor’s office, they certainly have the power to group towns in their favor.

Redistricting bills still have to go through the same legislative process as other bills, so expect a lot of public comment and debate starting this fall.