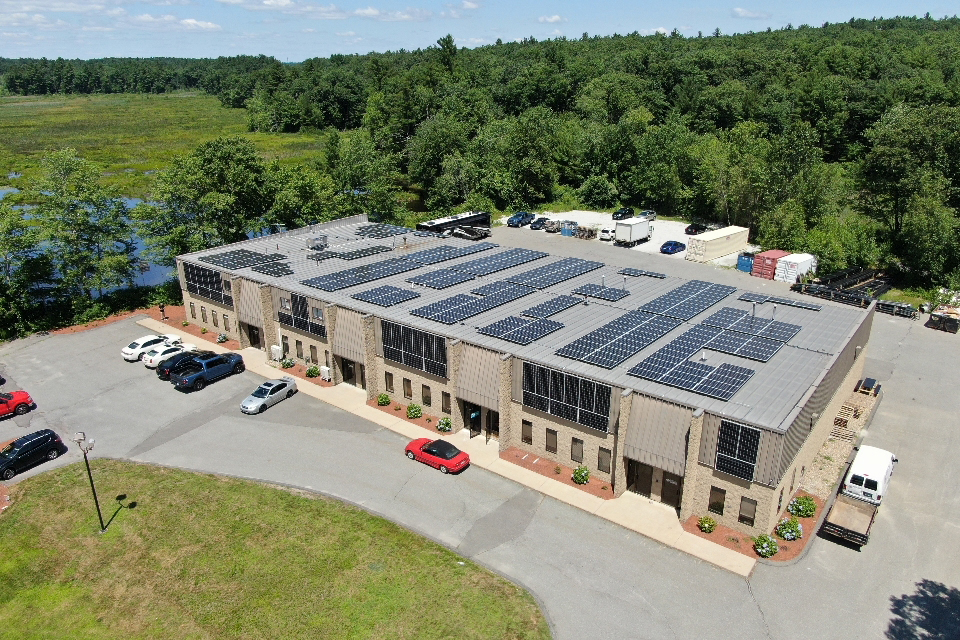 Londonderry-based Northeast Flooring Solutions will save approximately $22,359 in the first year of utilizing its 112.35kWh solar installation. (Courtesy photo)

Dan Livingston, founder of ​Northeast Flooring Solutions​, a commercial flooring installation company located in Londonderry, wanted his business to go solar in order to reinvest in the infrastructure of his office building.

When initially looking for ways to improve the building, and while building his own home, Livingston felt like solar was the right thing to do for both, after watching a news story about Elon Musk’s SolarCity.

After comparing the initial cost of the project with the payback, Livingston decided that going solar was a good, long-term choice for the business.

“We occupy a portion of the building, and I knew that the improvements would cover us as we grow and expand,” he said. “It also covers tenants who we share the building with.”

One of his tenants is Aeration Technologies Inc. owner Russ Sullivan, who also was excited for the solar project.

“I’m environmentally conscious and worked my entire life in solving environmental issues, particularly water treatment,” Sullivan said. “It’s the same principle we work with in the industries that have an issue with wastewater. I can
look at the panels and know we are
positively impacting the environment around us. A lot of people don’t understand the long-term positive impact. I know them because I work with them every day. Everyone can contribute a little bit; we just have to put a little something out there.”

Amanda Bartley, Northeast Flooring’s business manager, shared similar thoughts. “The mental aspect of the project, that you know you’re doing something good, was a huge feel-good benefit to going forward with the project,” she said.

Tax incentives and rebates, combined with a four-year return on investment, also made it clear that the project was a smart move. The savings is about $22,359 for the first year in electric bill costs, said Bartley, and the savings will grow as electric utility rates rise.

“The true benefit is the eco-friendly nature of the project,” said Bartley.

BigSky Solar installed the 112.35kWh DC system for Northeast Flooring in March 2019 and it went live in April. The expected lifetime of the system is about 25 years and generates enough power for the entire building. It reduces the building’s carbon footprint by 2,298 tons of CO2 over the life of the system — equivalent to planting 53,543 trees.

The building is producing Class II Renewable Energy Certificates at $17 per REC. Livingston’s building produces 115 RECs in a year.

The solar business has been growing, and in New Hampshire, the focus has shifted to commercial rooftop systems, said Brian Roy, owner of BigSky Solar.

“There is a push from businesses to install this year,” he said.

Aesthetics can be an initial concern for businesses when panels are added to rooftop buildings. “I’ll give that up to make the world better. This project was a positive thing,” said Brown.

“Everyone just has to put a little something out there. While the money savings was a plus side, it’s really about changing how you think in business.”