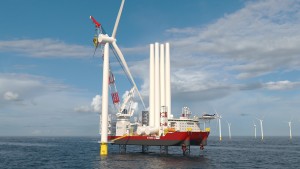 Eversource Energy and a Danish energy company that’s partnering with the firm on wind energy development have signed an agreement to charter an American-made turbine installation vessel for two wind farms the companies are developing between Long Island, N.Y., and Martha’s Vineyard off Massachusetts.

Eversource and Orsted will be leasing the vessel – the first of its kind built in the U.S. – from Virginia-based Dominion Energy.

The vessel, the Charybids, is expected to be launched in late 2023 for use in building the wind farm projects.

The 924-megawatt Sunrise Wind project, which will be located 30 miles east of Montauk Point on Long Island, N.Y., was originally expected to be operational by 2024. The 704-megawatt Revolution Wind project, which will be constructed 15 miles south of the Rhode Island coast and 32 miles southeast of the Connecticut shoreline, was expected to be running in 2023.

“All wind developers had some struggles in Washington with the previous administration,” Nolan told the New Haven Register. “But now there has been a real shift in moving wind projects forward. Folks that were working on (natural) gas leases in Washington have been redeployed to work on wind projects.”