Drinking has spiked as anxiety and depression peak at home 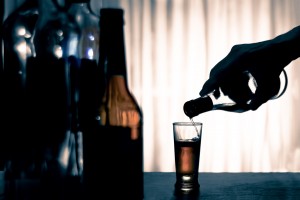 Kelsey Harriman grew up in a home without alcohol. She had her first drink at age 19 when she moved in with her boyfriend and his parents. It was a small event that overtook her life.

“They asked me to drink, and I didn’t think much of it. But it triggered a demon inside me. It was a whirlwind from there,” said Harriman, now 34 and a recovery support coach at the Lakes Region Mental Health Center. She finds her greatest purpose helping others stay sober.

“It’s a daily battle, and it’s definitely harder” because of the pandemic, which severed social and work life – including in-person connections that support mental health and addiction recovery. Being unemployed, or working at home by computer and meeting over Zoom with the camera off and the microphone muted, makes it tough to tune out inner voices and keep temptation at bay.

“If you have a job where you can keep your pajamas on and log on at 8:15 or whenever, you don’t feel you have to control how much you’re drinking because nobody’s watching.” There can be a nagging mindset: “‘I can get a bottle of whiskey and go in my room and it seems perfectly fine.’ Isolation is a huge factor for alcoholics and people who use drugs,” said Harriman. She has been working on her recovery for more than 10 years and takes it one day at a time. “It’s nearly impossible to stay sober when you’re alone.”

Covid has made life harder for people struggling to control substance misuse. It has also been a trigger for recreational drinkers, and people who used to have just a few. The pandemic’s cold brew of isolation, loneliness, depression, anxiety and lack of in-person accountability – as well as insufficient addiction treatment resources – have created a toxic cocktail. Vulnerable individuals self-medicate and try to relieve their boredom and stress by having a drink, maybe several, at earlier times in the day.

“They’re on a Zoom call and no one can see what’s in the mug,” said Daisy Pierce, director of Navigating Recovery. “You’re still doing a good or OK job and nobody is aware of your consumption.” Life online has morphed to include Zoom happy hours and trading recipes for new and exotic drinks, which has made it acceptable to drink more, Pierce said.

After a year of sequestering at home, the statistics are sobering.

According to a study by New York University’s School of Global Public Health, a major side effect of Covid-19 has been increased drinking among people with anxiety and depression, but particularly among those 40 and younger. Since Covid, drinking rose by 40 percent in people age 40 and under with anxiety or depression, by 30 percent in those age 41 to 59, and by roughly 20 percent among those age 60 and older, according NYU’s report. Those trends that are now straining detox clinics and ballooning requests for alcohol treatment programs. At this point, New Hampshire lacks sufficient space in detox clinics to handle the demand, local substance use experts say.

According to New Futures, a nonprofit that tracks health in New Hampshire, the first four months of the pandemic from March through June 2020 saw a 14% increase in alcohol consumption over the same period in 2019. In the fiscal year ending June 30, 2020, New Hampshire Liquor Commission sales reached $765 million, an increase of $36.5 million over fiscal year 2019 – a jump made more compelling because bars and restaurants were not ordering liquor and wine while they were closed.

In December, the Liquor Commission launched online ordering and 90-minute, same day pickup at outlets across the state, which has resulted in $1.5 million in sales so far.

“More people are staying at home – mixing cocktails, cooking and exploring new varieties,” said E.J. Powers, a  spokesperson for the Liquor Commission. They’re also buying high-end liquor and wines with disposable income that is not being spent on vacations and dining out, he said. Powers said 50 percent of New Hampshire’s sales come from outside the state. The increase also reflects an influx of second-home owners who are now living here full time.

Chelsea Lemke, a substance use disorder services director at Lakes Region Mental Health in Plymouth, said patients who struggle with addiction, who have trouble budgeting and were not accustomed to the windfall payments, spent their stimulus checks on drugs and alcohol instead of paying household bills. But the problem of rising alcohol use has crossed all demographics.

Even if  Covid did not cause it, “it’s shedding a magnifying glass on something that might have been unhealthy in the past, and now it’s a more significant problem” –  more intense and maladaptive, Lemke said.  “We’re seeing people who had unexpected life changes when a job fell out from under them. It’s such a striking 180 from what their daily life was.”

For Harriman and others, the pandemic has made recovery a steeper climb. The continued access to alcohol at state liquor stores and supermarkets while other venues were closed seemed to legitimize drinking – including for people who never had a known problem.

“We’ve been hearing from people that. since they’ve been home with less structure, they’re drinking more,” Lemke said. Other forms of stress release, such as going out to the movies or playing sports, and gathering with groups of friends, are less available. “People need to see their friends, people to talk to, to bounce things off for their social support.” For some, drinking at home has substituted for what’s missing in life.

“We’re seeing much bigger numbers than in the past.  When I look at our demographics, it’s a pretty wide range” of people across all socio-economic groups, including professionals with steady or high-paying jobs, said Corey Gately, director of substance use services for LRGHealthcare, which operates the local Doorway program for alcohol and drug misuse, an evaluation and referral service at Lakes Region General Hospital. According to reports from the state’s nine Doorway locations statewide, the coronavirus and its shutdowns have ushered in an increase in both drinking and dangerous behavior involving alcohol. New Hampshire doesn’t have enough space in detox clinics to handle the growing demand for help curbing or quitting serious alcohol use, she said.

In early 2020, before the pandemic, The Doorway at LRGH conducted three to five evaluations each month of people reporting alcohol problems. In June through August 2020, that number rose to 11 or 12, and calls from concerned family members and friends looking for advice and support for loved ones jumped by a similar amount. In June 2020, 25 people referred themselves.

The increase is likely fallout from Covid’s job losses, layoffs, furloughs and working from home, and the intensified stress, plus spouses spending more time together and noticing and reporting those problems in each other, Gately said.

Covid-19 has dramatically increased mental health and relationship problems – all of which are exacerbated by alcohol use. “People are not getting to daily life activities they should be, and are not functioning well,” Gately said.

Personal stress levels continue to go up – along with the frequency and volume of family conflicts and marital tensions. “People are needing personal space so much more than they ever have before,” and most don’t seek help for their mental health until they’ve reached a breaking point, Lemke said.

“At the end of the day, the pandemic is a petri dish,” a breeding ground for alcohol misuse.  “Connection is a last line of defense” and when that’s taken away, substances become substitutes, coping mechanisms, and forms of anesthesia, Lemke said. “People are home all the time where alcohol is more accessible. If no one’s leaving the house, nobody has to drive,” which is also a green light for drinking. “People think, ‘I can start drinking in the morning, it’s not like I’m going anywhere.’”

The absence of in-person support meetings, such as Alcoholics Anonymous, has intensified the problem. “They relied on them, or went every day or week, and they’re not finding the same relief from the virtual groups,” Lemke said. During Covid, the overall number of patients seeking mental health help at LRMHC has risen by 10 percent, and there are fewer staff available because of quarantining during Covid.

For patients struggling with alcohol, Lemke and other counselors help patients map out a detailed schedule for the day and week, including wake up and shower times, appointments, times for shopping or in-person or virtual visits with friends or family or taking a walk. “The harder time they’re having, the more things I fill in their schedule,” she said, because open-ended days without requirements or obligations are invitations to drink, if only to pass the time.

Daisy Pierce, executive director of Navigating Recovery, said there’s been “an incredible uptick” over the last 45 days from people who have been called back to their office, who realize their alcohol consumption is a problem. “Some people need meetings. Some people need detox,” she said.

Julie Moulton, recovery coach at Navigating Recovery, said the state doesn’t have enough detox clinics available to handle the numbers of people who need them. People can be stabilized in the emergency department at LRGH, but they need monitoring over time and medication assistance to detox safely, because rapid withdrawal can cause seizures, Moulton said.

Some Lakes Region residents experiencing alcohol withdrawal are encouraged to go directly to Portsmouth Hospital, which can help short-term. The state’s detox clinics are Green Mountain in Effingham and Farnum in Manchester, which have wait lists of up to 30 days,  Moulton said. Some people are referred to clinics in Massachusetts.

“There are people who wouldn’t be in this situation if they weren’t out of contact with others and working remotely,” said Matthew Danhoff, a recovery coach who works at The Doorway, and has witnessed the uptick during Covid. “Some people call and say, ‘I’ve been drinking for six to eight months. I’m not sure what to do.’ They realize they have a problem. They’re humiliated. We try to encourage them that they’re not alone.

“Shame and guilt are huge issues. Just picking up the phone and letting someone know there’s a problem is a hurdle. When they’re in urgent need of treatment, we can help access that,” Danhoff said. “As people in long term recovery, we know how to help them – but we don’t know them until they come for help.”

Pandemic meets ‘infodemic’: Is there too much data out there?