Developer of former Troy Mills moving ahead with plan for housing, commercial space 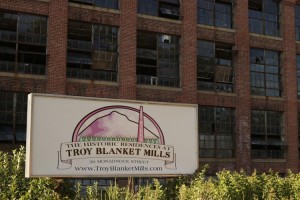 Old signage at the Troy Mills site refers to a former residential project planned there when it was owned by the Troy Redevelopment Group. Current owner Christopher Eric Farris said he’ll be using a different name for the complex. (Tim Nail/The Keene Sentinel)

An Epping-based developer plans to convert the former Troy Mills complex into apartment housing and commercial space to revitalize the center of town, and he’s seeking a state grant to help.

Christopher Eric Farris said he’s planning an estimated $6 million renovation of the building to include 107 one-bedroom residential apartment units and up to 15,000 square feet for lease by commercial businesses, including retailers. He said the project intends to introduce more affordable housing to Troy and Cheshire County, adding that he is targeting monthly rent at around $1,300 per unit.

“If I can provide units [for people making] 80 percent [or less] of the area median income, then that’s what I’m going to do because that’s what the area needs,” Farris said.

The Troy Mills property at 30 Monadnock St. is made up of factory buildings constructed between 1920 and 1995 following closure of an earlier mill on the site that made horse blankets during the Civil War for Union soldiers. Later, the mill produced vehicle fabrics for automakers like Toyota and Ford, according to previous Sentinel reporting.

Troy Mills closed in 2001, with its operator filing for bankruptcy two years later. The town of Troy acquired the property through significant back taxes and formed the Troy Redevelopment Group, a nonprofit run by the town that aimed to have a developer repurpose the complex. A previous proposal to redevelop the property proved unsuccessful.

The original mill property spanned 19 acres, but was sold in two parts last year, according to Troy Selectboard Chair Richard Thackston. One part was purchased earlier last year by CWMA Realty of Fitzwilliam to be used for a Mi-Box moving and storage facility.

Farris purchased the other part of the property and two parking lots across the street from the town of Troy for $368,000 in October 2021, according to previous Sentinel reporting. Farris is also currently looking to build 26 housing units on Drummer Road north of Route 9 in Keene.

Farris said Friday he estimates development is about 16 percent complete after clearing out remnants of the mill and past development attempts inside. He’s working on completing the first 29 apartment units by spring.

Farris’ plans for the Troy apartment units include fiber internet connections with gigabit speeds to each unit, custom-built cabinetry, full kitchens with granite countertops and building-wide heating and air-conditioning from a geothermal energy system.

“I find the renewable aspect of not just this project, but any project, to be more valuable … than anything else,” he said. “Most mill buildings or apartment complexes don’t have any land available [for geothermal systems]. We have the luxury here of a good amount of land.”

Farris said the commercial and retail spaces will make up the Mill Street side of the property that abuts a former piece of the original mill land purchased earlier last year by CWMA Realty of Fitzwilliam. That smaller portion of the land is now being used for a Mi-Box moving and storage facility.

At its Aug. 17 meeting, the Troy selectboard approved the building permit for Farris to proceed with the project, Thackston said. The selectboard initially issued that permit in May, but later rescinded it at the request of the town’s planning board. That body approved the project earlier this month, leading to the selectboard to reissue the permit.

“The planning board thought we had wrongly issued it and so we rescinded that building permit and gave Farris back his check,” Thackston said.

“The planning board … told him what they wanted and they voted to accept his application as complete on [Aug.] 3.”

The board also discussed granting him a Community Revitalization Tax Incentive at that meeting, Thackston said.

The incentive law allows cities and towns to provide property tax relief to landowners who demonstrate a desire to “substantially rehabilitate a building located in the community’s designated areas, such as a downtown or village center,” according to the NH Preservation Alliance.

“The base [relief length] is typically five years, and that’s just for improvement,” Farris said. “If you add new housing to that formula, it typically adds two years and if you add affordable housing it adds another four years.”

Now, he’s looking to apply for the state’s InvestNH Capital Grant Program, which has a total of $100 million available to fund affordable workforce housing across the state. Grants will be awarded to projects with three or more multi-family rental residential units affordable to those at or below the 80 percent area median income, as Farris noted he is targeting. He has until Sept. 2 to submit his application.

Farris said he anticipates the Executive Council will award grants in November, after which he said the project should take 18 to 24 months of development if he receives the funding.

If awarded the grant, Farris said he wants the project to be completed in a single phase and would plan to move “the next day” on ordering a new elevator for the building, which he said could take 11 to 12 months to arrive, as well as hiring a company to drill wells for the geothermal energy system.

If not accepted into the grant program in November, Farris said construction will be completed on 29 residential units over the following two months so they’re ready for lease by spring. He said he’d have to fully fund this first phase and then negotiate with banks to have them finance 70 to 80 percent of the second phase to complete more units.

“[Without the grant] it’ll take much longer and the finished product won’t be as good because it will be done in pieces instead of one comprehensive whole,” he said. “We’ll have to fund 100 percent of the first phase and about 30 percent of the future phases.”

In addition to the grant for the project, there’s potential for the state to also award the town of Troy $10,000 per approved unit as part of the InvestNH Municipal Per Unit Grant Program. The town could receive a maximum award of $1.7 million if all 107 apartment units are approved, Farris said, which would be over half of Troy’s total budget, per the town’s 2021 annual report.

Thackston said Monday the town has yet to apply for the municipal grant but that board members “intend to” submit their request by the Sept. 2 deadline.

He said there’s been some resistance to the project but that he felt some comments made from residents during the Aug. 3 and 4 selectboard meeting were “wildly out of bounds to irrelevant.”

“The audience’s concerns they expressed were kind of a broad spectrum from some people who wanted to re-envision the project; well, that’s outside the scope of the town, it’s private property,” Thackston said. “Then there were questions about the quality of [Farris’] workmanship and his competence.”

Thackston said after 15 to 20 years without proper development he feels this could be the project that finally converts the mill into a functional property again. He said when the Troy Redevelopment Group was formed, housing wasn’t as much of a concern, but he feels priorities have changed.

“Fifteen years ago, there was a surplus of the housing stock in the state of New Hampshire and you could see that by the extremely depressed prices and the foreclosures,” he said. “I think [this project] is a good thing [and] … if you own a grocery store, gas station or restaurant in Troy, you’re going to think this is great.”

Farris said he personally feels the project is a benefit to the entire town with the aim of getting the municipal grant and increasing potential local business.

“I’m not just trying to attract people who live in Troy; I’m trying to pull people from other areas into Troy — that’s how to grow communities and improve and bring new blood,” Farris said. “Having a big, ugly, blighted building in the middle of your town doesn’t produce any revenue of any kind.”