Despite being able to reopen, many New Hampshire movie theaters remain dark 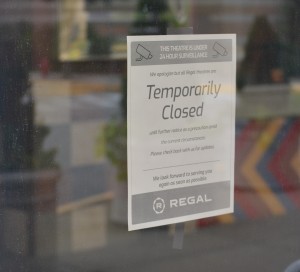 A letter taped on the front door at Regal Cinemas in Newington. (Photo by Jay Pinsonnault)

New Hampshire movie theaters were able to reopen their doors on June 30, but the majority  have remained closed across the state.

However, all Chunky’s Cinema Pub locations – in Nashua, Manchester and Pelham – chose to open Monday when they were allowed to operate under Gov. Chris Sununu’s direction.

“It went very well,” said Robert Skinner, general manager of the Nashua location. “We had some classics showing, and those are what we will be showing through the middle of August until Hollywood starts releasing new content.”

When theaters reopen they have to reduce capacity by 50%, increase cleanings between showings, and implement other health and safety protocols.

At 50% capacity, Chunky’s in Nashua can accommodate roughly 500 guests through the eight theaters Skinner said.

When it opened on Monday, “we were a little shy” of 50% capacity, Skinner said. “All the customers seemed to be in great spirits to be able to get out of the house and come down, watch a movie on the big screen, and get some dinner at the same time. We had a good turnout. It certainly keeps us optimistic.”

Chunky’s is currently showing a “pretty wide mix” of selections from “Jaws,” “Ghostbusters,” “Trolls World Tour,” “The Greatest Showman” and “Despicable Me,” among others.

Skinner said was “optimistic” about turnout. “We have seen restaurants that have opened in the area and they have had good attendance. People are looking for some sense of normalcy and to be able to escape home confinement.“
‘We continue to pay close attention’

In Salem, Cinemark Rockingham Park and XD remains closed. The Texas-based Cinemark chain announced Tuesday that some of its theaters across the country will open Friday, July 24, with additional theatres reopening in subsequent weeks.

“Our multi-phased reopening plan was thoughtfully designed with multiple contingencies in place that enable us to efficiently adapt to today’s ever-changing environment,” said Cinemark CEO Mark Zoradi in a statement. “We continue to pay close attention to the status of the virus, local mandates and availability of new content while prioritizing the health and safety of our guests, employees and communities. The health and safety of employees, guests and communities is a top priority.”

Regal Cinemas, a Knoxville, Tenn.-based chain that has locations in Hooksett, Concord and Newington, plans to reopen all its U.S. theaters on July 31 instead of its previously announced date of July 10.

“In line with recent changes to upcoming film release dates, we have made the decision to move our reopening date to July 31,” Regal Cinemas corporate owner Cineworld said in a statement. “With the on-going pandemic, this new date remains subject to final confirmation.”

Ethan Guglielmo, a 2019 graduate of St. Thomas Aquinas in Dover and a sophomore at Georgia Tech, said he would go to the movies three or four times a month before the Covid pandemic.

“I was planning on going back to theaters since it was going to be 50% capacity and wearing masks, but now with the spike (in cases) going up, I am a little more hesitant but still plan on going when more theaters open later in July,” said Guglielmo.

Hollywood has pushed back the release of all of its movies to late July and August. The one movie Guglielmo is looking forward to seeing is Christopher Nolan’s “Tenet.” It is now scheduled to come out Aug. 12.

“That’s definitely the one I want to see,” he said.

The Colonial Theatre in Bethlehem hopes to open its one-screen venue in the middle of July.

“We’re going to adhere to everything the state is asking theaters to do,” said Stephen Dignazio, executive director of The Friends of Colonial Theater. “I don’t want anybody to get sick, my staff, or my customers.”

“We have polled our members, our volunteers and supporters who are not members, and it’s trending about 50/50 on those who would like to come see a movie and those who are still not comfortable,” Dignazio said.

At O’Neill’s Cinemas, which has a theater in Epping, there is no scheduled reopening date.

“We are keeping a close eye on CDC, local and state government guidelines to make the movie going experience when we open again as safe and enjoyable as possible,” said Lori Dirksen, marketing manager at O’Neill’s. “Although some states are allowing theaters to open now or soon, we also need to keep an eye on what movie studios are doing. As they delay the release of their new films to theaters, unfortunately we need to delay our opening day. There are always a lot of moving targets with everything involved in Covid-19.”