Dem lawmakers have given session a noticeable green tint

After taking power in a blue wave, New Hampshire Democratic lawmakers are passing what amounts to be a green wave of legislation. 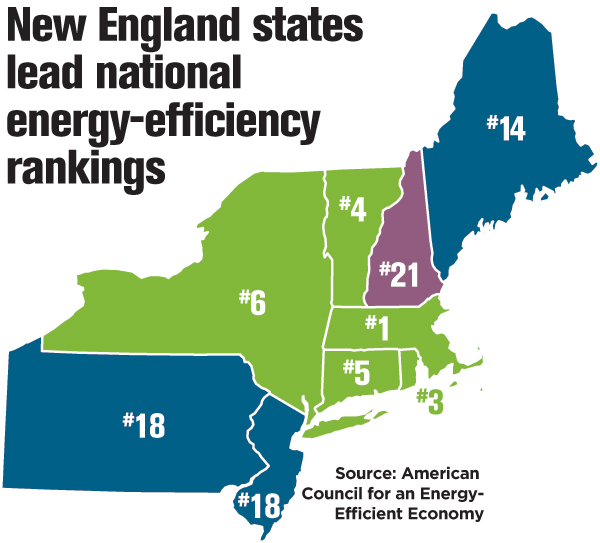 It is not exactly the splashy federal Green New Deal resolution pushed by the newly elected congressional Democrats, but, as Cathy Corkery, New Hampshire Sierra Club chapter director, said, “it is exciting.”

It is also ambitious for New Hampshire, which has been less aggressive than its surrounding states’ environmental policy.

“We need to catch up. There have been six years of pent-up demand, and the floodgates are open,” said Rep. Rebecca McWilliams, D-Concord.

In the last few weeks, lawmakers in one chamber or the other, or both, have passed 33 out of 50 bills related to the environment. The bills would:

• Increase the state’s renewable portfolio standards (RPS) from 25 percent renewable energy in 2025 to 60 percent by 2040.

• Increase fivefold the size of projects eligible for net metering.

• End the Regional Greenhouse Gas initiative (RGGI) rebate and use all proceeds for energy efficiency.

The bills don’t only relate to energy policy. In the House, bills have been approved to ban single-use plastic bags and plastic straws, double air pollution fines, cut the arsenic standard in half and expand wetlands regulation. Indeed, if you count another 11 bills re-referred or retained for next year — including a proposed carbon tax — you have an unusually high 90 percent survival rate.

“I think our Democratic friends in the Legislature have seen this as an opportunity to do anything they want,” said Sen. Jeb Bradley, R-Wolfeboro. “But there has to be some balance with the cost involved, on businesses, on ratepayers on taxpayers.”

Still, we are only at the halfway point on April 11 — crossover day — when all bills passed by one chamber go to the other, and it is unclear whether the bills will survive, even though chambers are controlled by Democrats. Business organizations are lobbying hard against many of them.

And it’s uncertain whether Gov. Chris Sununu will allow them to become law. Sununu, who has made his veto intentions clear on such issues as taxes, the death penalty and paid family leave, has largely been silent on environmental legislation. He has, as a former environmental engineer, touted his green credentials, so a blanket veto of all these bills might tarnish that image and hurt him in any upcoming election, whether it be to remain as governor or run for a U.S. Senate seat.

With one major exception, the party-line votes to pass these bills were not lopsided enough to overcome any vetoes. (Sununu’s press secretary did not respond to NH Business Review inquiries for comment.)

The federal Green New Deal — most identified with U.S. Rep. Alexandria Ocasio-Cortez of New York and taken up by a number of Democratic presidential candidates — calls for 100 percent clean renewable energy by 2030. It also includes a massive public works program on the scale of the old New Deal during the Roosevelt administration.

The deal would cost up to $1 trillion a year, partially paid for by a $60-per-ton carbon tax that will increase by $20 a year. It would also be financed by cuts in fossil fuel subsidies, expected avoided health costs from reducing pollution, and slashing the defense budget by $500 billion (on the premise that the nation would no longer need the military resources to defend foreign fuels). It also would help fossil fuel workers transition into the new economy as well as low- and moderate-income people bearing the brunt of the carbon tax and those living in areas affected by climate change.

But the Green New Deal, at this point, is a resolution, not a comprehensive piece of legislation.

New Hampshire lawmakers and environmental activist have developed their own energy blueprint, a white paper that echoes the Green New Deal’s goals of moving to 100 percent renewables (though by 2040) and joining efforts to create “a nationwide carbon pricing system.” But it was written in response to changes in the governor’s state energy plan, which favors lowering electricity costs over expanding renewable energy.

“The governor’s update was a down-date,” said Rep. Robert Backus, D-Manchester, head of the House Science, Technology and Energy Committee and an author of the Democrats’ white paper. “We are falling behind in pushing for renewables and energy efficiency. We would like to green up New Hampshire on the energy front.”

Not all environmental organizations signed on to the white paper.

“We did not take a position” on the white paper, said Madeleine Mineau, executive director of Clean Energy NH, which backed almost all of the green energy bills. “We feel strongly that renewable energy is not a partisan issue. It’s about keeping our energy dollars in the state. This type of bipartisan support is how we think we will make progress in this state.”

But for the most part, most of the bills have passed on party-line votes.

Under New Hampshire’s current renewable portfolio standards (RPS), utilities must get a quarter of their energy from renewable sources by 2025 or pay a penalty. That standard is behind neighboring states. Vermont’s RPS is 55 percent, Maine’s is 35 percent and Massachusetts’s goal goals are 35 percent by 2030 and 45 percent by 2030. (Vermont would go up to 75 percent by 2035, though it includes larger hydropower as a renewable.)

“This is a very serious, pressing issue,” said Sen. Martha Fuller Clark, D-Portsmouth, on the Senate floor. “We need to make critical changes to avoid the most drastic effects of climate change. We need to become more of a leader in this area.”

Countered Senator Bradley: “The costs are going to be significant, and the other question is reliability.”

Bradley argued that since the law won’t take effect for another five years, it should be re-referred and studied. The House passed a bill that would set up a study committee to see what would be needed to move to 50 percent by 2040.

One way to increase renewable energy is to raise the cap on projects eligible for a net metering, whereby the utility credits the customer for the amount of energy they generate.  New Hampshire’s cap is currently 1 megawatt, lower than most caps around the country, including Massachusetts, which has a 2-megawatt cap on private projects and 10 megawatts for public projects.

Last session, Sununu vetoed a bill that would have increased the cap for all projects to 5 megawatts. But this year, both the House and Senate have voted to pass similar bills, with veto-proof margins. SB 159 would include a provision that would calculate the credit for such generation as a load reduction rather than something the utility would resell into the regional grid. This would help reduce peak demand, as well as reduce distribution costs, said Mineau of Clean Energy NH, “and help alleviate any concern about cost-shifting.”

Peak demand has continued to go up in New Hampshire, where it has gone down in every other New England state. And that, said Mineau, means the state would pay a larger share into the grid, increasing transmission costs.

The BIA has opposed increasing the net metering cap because of cost-shifting concerns, but individual businesses as well as municipalities are backing expansion as a way to cut electricity costs.

It would enable Middleton Building Supply, for example, to build a solar facility to take care of all its electric needs, said Marcella Perry, the company’s chief financial officer. She added the company could build separate smaller facilities to increase generation, but then it would have to multiply startup and overhead costs, making it less economically feasible.

“Give us an opportunity as a business to make our own business decisions,” she said.

The House also has passed House Bill 466, which would increase the upper limit on a small generator from 100 to 500 kilowatts, allowing more small businesses to get a better reimbursement rate than originally set for rooftop solar.

But the difference in those rates “must be passed on to all ratepayers,” argued Rep. Fred Plett, R-Goffstown, on the House floor. “It’s reaching into people’s pockets.”

“They keep talking about ratepayers. Nobody pays rates, they pay bills,” replied Backus, sponsor of the bill, arguing that the legislation would help not only those that participate in the program to cut the amount they are paying but by lowering peak demand, cut transmission and distribution costs, which would save money for everyone else.

Many of these same arguments about energy efficiency are similar to the debate over what to do with the proceeds from RGGI, the nine-state program that requires power plants to purchase the right to emit carbon into the air.

Since 2012, New Hampshire has rebated about three-quarters of the RGGI proceeds back to the ratepayers, far more than any other RGGI state. All of New Hampshire’s neighboring states, for instance, spend all RGGI proceeds on energy efficiency or renewable programs.

Under SB 122, New Hampshire would join them. It would end the rebates and direct all RGGI proceeds to be spent on energy efficiency, increasing the amount going to low-income residents, school districts and local governments. The House version — HB 582 — would do the same for residential rates, though it would rebate the total amount to businesses and institutions.

Lawmakers would also allow the PUC to increase the system benefits charge, which supports energy-efficiency projects, as long as a reduction in peak demand ends up saving ratepayers more than it actually costs. Lawmakers passed a bill last session that would require that the Joint Legislative fiscal Committee approve such adjustments, but SB 205 would take them out of the loop until at least 2026 and HB 166 removes legislative oversight altogether.

Similar bills, would allow ratepayers to foot the bill for storage investments. SB 204 would allow utilities to pass along storage costs to customers if they increase reliability and efficiency. (It also would allow municipalities to exempt energy storage systems from property taxes.) HB 715 would allow the PUC to impose a tariff to reach a 2 percent storage reduction goal in peak demand, allowing it to up that goal to 15 percent if it is deemed to be in the best interest of the ratepayers.