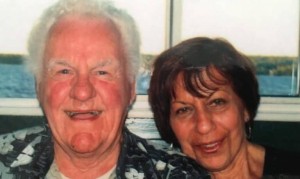 Leo and Anna Barron died within three days of each other in 2020 after contracting Covid while living at Benchmark Senior Living’s Greystone Farm assisted living facility.

Editor’s note: This article has been updated to include Benchmark Senior Living’s response to the lawsuit.

The daughter of an elderly couple who died of Covid has filed a wrongful death suit against a Salem assisted living facility, but on Monday the facility claimed it was immune from suits because of a federal law designed to protect front line workers in an emergency.

The facility’s legal strategy is being used nationally to protect senior care centers from Covid-related suits, but while backed somewhat by the federal Department of Health and Human Services, federal courts have mainly rejected it.

Linda Barron filed her complaint on June 28 in Rockingham County Superior Court against Greystone Farm at Salem – owned by the Waltham, Mass.-based Benchmark Senior Living LLC – on behalf of the estates of her deceased parents, Leo and Anna Barron, who were both admitted to the facility in 2018. The couple, according to several reports following their deaths which were within three days of each other, had been suffering from dementia just around the same time, after nearly 60 years of marriage and after some 25 years of ballroom dancing.

“They declined together, but their love shined through,” Linda Barron told WMUR-TV at the time.

Leo Barron tested positive of Covid-19 in April 2020 and his wife in the following month, according to the report.

They were transferred to Parkland Medical Center in Derry, where they shared the same room and with the help of Merrimack Valley Hospice, moved to High Point, the first hospice facility in Massachusetts to open a special unit for Covid patients, holding hands during the transport, according to an article in the Lawrence Eagle-Tribune.

Their daughter lauded her parents care at Parkland and High Pointe in those articles and another one by the NH Union Leader, but she didn’t mention their Greystone residence in any of the reports.

Her suit, filed by Ryan Russman, an Exeter attorney, charged the assisted facility of “routinely [emphasis in the filing] and negligently administered care to Leo and Anna Barron, interacted with them and entered their room without utilizing required PPE, if any at all.” They allegedly used a nebulizer machine (a vaporizer breathing apparatus with a mouthpiece) without properly disinfecting it and allowed residents to be in community areas without face masks or socially distance, in violation of federal protocols or their own internal policies.

There was no Covid outbreak at the facility at the time, according to state Health and Human Services Department listings of such incidents, but it isn’t clear whether they were all reported at the time.

Greystone would not comment on the litigation, but its owner, Benchmark Senior Living, issued the following statement:

“The well-being of all our residents has been and remains the highest priority at Greystone Farm. Throughout the Covid-19 pandemic, Greystone Farm has administered a program dedicated to mitigating the spread of Covid-19, including the implementation of guidance from state and federal agencies related to personal protective equipment and infection control.”

On Monday the company’s attorney, Joseph Desmond of Morrison Mahoney, a Boston law firm with an office in Manchester, filed a motion in U.S. District Court in Concord. He argued that state negligence laws were totally exempted because of the Public Readiness and Emergency Preparedness (PREP) Act, a 2005 law that grants immunity in times of emergency to frontline workers and other entities who deploy approved countermeasures.

the creation of an exclusive federal cause of action,” wrote Desmond in the filing

Instead, all claims would go to a no-fault-type compensation program designed by Congress, similar to workers’ compensation.

Benchmark is covered, said the filing because it’s a “program planner” specified in the law. Since the chain was acting under federal authority, it is covered under the act, which “grants broad immunity to covered persons, such as front-line healthcare workers and other entities who deploy approved countermeasures … so that they may combat the emergency without fear of later litigation and further expressly preempts those claims,” the company argues.

This is not the first time such a defense has been tried. According to Bill of Health, a Harvard Law school website, it’s a common litigation strategy “attempting to reroute state tort lawsuits to federal court,” said the article, which was written last November. Just a month earlier, a U.S. Appeals Court in the 3rd circuit in Philadelphia rejected it the strategy, ruling that the covered countermeasures meant applying protections like vaccines ventilators and PPE, not the failure to use them. It sent the suit against a New Jersey nursing home back to state court. A more recent decision by the 9th Circuit in San Francisco agreed.

The article goes on to say that the issue is moot in a lot of states since so many passed laws or issued executive orders granting immunity to Covid-related lawsuits, making winning such cases extremely difficult. That’s not the case in New Hampshire, where the Legislature rejected a proposed law to grant such protection for businesses, despite a strong lobbying effort by the Business & Industry Association of New Hampshire. At the time, no such cases had been filed in the state. Since then, however, NH Business Review has reported on at least three such suits.