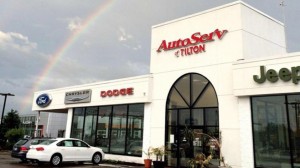 AutoServ of Tilton, among the largest car dealerships in central New Hampshire, has been sold.

The transaction is expected to close on Dec. 1.

Founded by Paul Gaudet Sr. and owned and managed by the Gaudet family, AutoServ of Tilton is the flagship of an enterprise that at its peak operated at six locations, including Concord, Plymouth, Newport and Laconia, and has been a mainstay of the commercial mecca surrounding Exit 20 on Interstate 93 for the past 30 years.

The new owner, Dan Dagesse, is chair of the Nucar Automotive Group and longtime friend of the Gaudet family, He has long been a major player in the New Hampshire automotive market off and on for more than four decades.

A native of Colebrook, he acquired his first dealership in 1977, and four years later founded the Berlin City Auto Group with dealerships in Maine and Vermont. He sold Berlin City Ford in 2006 and then parlayed his success into a string of dealerships in Massachusetts and Delaware, pausing only to buy a half share in the Balsams resort.

Dagesse returned to the New Hampshire automobile market last year, partnering with two of his former general managers at Berlin City, Don Noyes and Shawn Hanlon, to acquire a Chevrolet dealership in Colebrook and a Ford dealership in Plymouth as well as open AutoNorth Pre-Owned Superstore in Gorham. Hanlon will have an ownership stake in AutoServ/Nucar, where he will serve as CEO.

Dagesse and Dan Herbert, a contractor also from Colebrook, bought the Balsams from the Tillotson Corp. in 2011 for $2.3 million.

“We were two guys with a love of getting jobs back to the North Country and the Balsams opened, but we knew nothing about that business,” Dagesse told New Hampshire Public Radio in 2017, after selling his share in the resort to Les Otten.

AutoServ has been a consistent contributor to the Lakes Region community and a regular participant in any number of local charitable programs and projects.

“Our philosophy is simple,” said Gaudet, “AutoServ is successful because we are a part of the community, not just an address. I truly believe that my retirement opens AutoServ up to a more successful and secure future. Dan’s goal is not to change AutoServe, but instead give it access and wisdom necessary to becoming the industry leader in all the bands we represent.” He said that his son Dennis Gaudet will serve as general manager of Nucar of Tilton.