Daily case numbers for New Hampshire have decreased over the last week, but doctors warn that the latest figures may significantly underestimate the virus’ spread.

According to data from the state’s official Covid response dashboard, New Hampshire averaged 1,882 new cases per day for the week ending Tuesday, down 38 percent from a week earlier. The seven-day average for the share of antigen and PCR tests coming back positive was 16.1 percent, down from 21.6 a week ago. According to NH Hospital Association data as of Wednesday, a total of 538 people were hospitalized for the disease, including 387 with active infections and 151 who are Covid-recovering, which means that they are no longer infectious but still need critical care. The number of total hospitalizations is down from 566 a week ago.

“We are seeing a decline in the number of new cases being reported,” said Dr. Jose Mercado, Dartmouth-Hitchcock Medical Center’s Covid response leader. “This decrease in new cases may be consistent with observations from states that experienced an earlier spike in cases due to omicron, where the surge lasted somewhere between three and five weeks.”

The drop in cases in the community also means that fewer health care workers are getting infected. 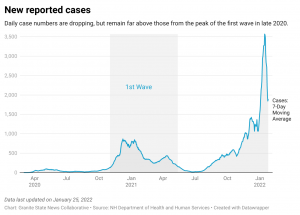 “We are seeing a steep drop-off in the number of employees who are testing positive for Covid, which is in line with the decline in the community,” says Lauren Collins-Cline, director of communications at Catholic Medical Center. “This is obviously a great development. We still have higher than normal absences, but we are working our way back.”

As local staff come out of quarantine and return to work, hospitals will continue to benefit from temporary federal staff support.

Gov. Chris Sununu announced during Wednesday’s press conference that a “strike team” from the Federal Emergency Management Agency and Department of Defense that has been helping Elliot Hospital in Manchester has been authorized to stay until March 7, a few weeks longer than anticipated. Collins-Cline of Catholic Medical Center also noted that her hospital will continue to receive federal staff support for another week or so.

The state’s per capita case count of 172 per 100,000 has dropped rapidly in the last week and is now back below the national average of 186, according to an analysis of Centers for Disease Control data by The New York Times. The states with the highest numbers are Alaska and Oklahoma, at 343 and 282, respectively.

Although the data are encouraging, state epidemiologist Dr. Benjamin Chan cautioned that current numbers may be more due to delays in data processing than to actual decreases in the virus’ spread.

“While our data dashboard might look like there’s a little bit of a drop-off, there’s an uncertainty period in the data because of the ongoing processing of a lot of the cases coming into us,” Chan said during Wednesday’s press conference. “We don’t believe we’re seeing a drop-off in the circulation of Covid at the moment.”

“New Hampshire’s positive case counts remain quite high,” Wassell said, “and it is important to recognize that some of the daily counts are delayed, and the increased number of unreported home antigen tests which are performed and may or may not be included in the total case counts.”

“We should remain vigilant and continue to follow mitigation strategies before jumping to any conclusion that we may be moving past a surge,” Mercado said.

Nevertheless, Wassell said she is looking forward to the coming weeks with “cautious optimism.”

According to data from the NH Hospital Association, there are still 20 staffed adult ICU beds available in the state, same as last week, even though the total number of beds has dropped from 230 to 218. More than 77 percent of the state’s ventilators are still available.

Unvaccinated patients made up 41.3 percent of all hospitalizations for active Covid infections, while patients with some level of vaccination made up a slightly larger share, at 43.9 percent, split roughly evenly between those who had received their boosters and those who had not. (Vaccination status was unknown for 14.7 percent.)

An average of eight Granite Staters were dying from Covid each day as of Wednesday, according to a statement by Chan during Wednesday’s press conference. Although this number is up significantly from last week, it is still less than the peak of 11.7 deaths per day during the first wave, and the more recent peak of 11.6 in late December 2021.

As of Wednesday, there were 13,870 active Covid cases diagnosed in New Hampshire. There have been 267,800 confirmed cases and 2,173 Covid-related deaths in the state since the pandemic began.

Sununu also announced on Wednesday that the state will offer 1 million at-home rapid tests for sale at many of the state’s liquor stores starting in the next few weeks. These tests will be sold at cost, for around $13 each, and the proceeds will be returned to the pool of money available to respond to the pandemic.

Data from the state Department of Health and Human Services and the CDC do not agree on how many Granite Staters have been vaccinated, but both datasets show that the total share of the population that is vaccinated has increased slowly over the last six weeks. DHHS reports that 56.4 percent of Granite Staters are fully vaccinated this week, as compared to 55.5 percent in mid-December. Data from the CDC shows a similar trend, increasing slightly from 66 to 69 percent during the same period. The gap between DHHS and CDC data in terms of the total number of shots administered is now roughly 778,000 doses.

The CDC continues to recommend that anyone over 5 years old get vaccinated. For adults, they recommend getting one of the mRNA vaccines (Pfizer and Moderna), rather than Johnson & Johnson, but the CDC emphasizes that any vaccine is better than being unvaccinated.

For children between the ages of 5 and 17, the CDC recommends getting the Pfizer-BioNTech pediatric vaccine.

The CDC also recommends that everyone who is eligible get a booster shot. The amount of time you should wait after finishing your primary series varies by vaccine. For Moderna, the wait is six months, while the waits for the Pfizer-BioNTech and Johnson & Johnson vaccines are shorter, at five and two months, respectively.

“We now have good data that boosters are effective in keeping you out of the hospital,” Mercado said. “If you are eligible, schedule your booster now.”

People can register for a vaccine or for a booster by visiting vaccines.nh.govor calling 211.