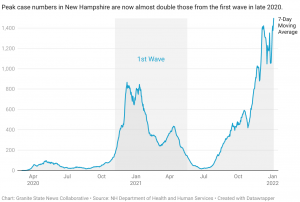 Covid-19 indicators for New Hampshire have risen sharply in the last week after three weeks of steady declines. The number of new cases per day is now nearly double what it was at the peak of the first wave at the end of 2020.

According to data from the state’s official Covid response dashboard, New Hampshire averaged 1,495 new cases per day for the week ending Tuesday, Jan. 4, up 41 percent from 1,057 a week earlier. The seven-day average for the share of antigen and PCR tests coming back positive was 20.6 percent, up from 15.2 percent a week ago.

A total of 503 people were hospitalized for the diseases as of Wednesday, including 359 people with active infections and 144 people who are no longer infectious but still need critical care. (This last type is now being referred to in state data reports as “Covid-recovering.”)

“The last week has been especially challenging with our highest number of admitted Covid-19 patients since the pandemic began,” said Dr. Timothy Scherer, chief medical officer for Southern New Hampshire Medical Center. His hospital admitted 39 patients last week, the majority of whom were unvaccinated.

Dr. Jose Mercado, Dartmouth-Hitchcock Medical Center’s Covid-19 response leader, noted that the big increase is part of a broader trend, “a significant spike in cases, which we expected to see after the holidays.”

Even though the Omicron variant has been present in New Hampshire for several weeks, Scherer warned that its effects are still hard to predict, since the variant still only accounts for less than 15 percent of all cases in New Hampshire.

“Early reports from other countries did not show a significant increase in hospitalizations with the spread of Omicron,” Mercado said, which has led to assumptions that this variant may be less severe than others. But Mercado cautioned against reading into these reports too deeply.

“If we allow it to spread through our communities, we may still find ourselves in a situation where our health care system is overwhelmed,” he said. His greatest worry is that a surge in infections among health care workers would significantly reduce hospitals’ ability to care for the broader population.

This would exacerbate staffing issues Scherer has seen in his own hospital.

“Many of our staff have left the hospital setting due to the stressors and concerns over Covid-19 to work in different areas or even different fields,” he said. “Our remaining staff remains vigilant and dedicated to the care of our community, but they are tired, working to help our patients despite having less helping hands to accomplish this goal.”

The latest surge has pushed daily case numbers to all-time highs. The seven-day moving average for new daily cases in New Hampshire had fallen in the first half of the year, bottoming out at just 16 at the end of June, but has quickly risen since then. After dropping slightly in mid-December, the state is now averaging roughly 600 cases per day more than it was at the height of the first wave in December 2020.

New Hampshire’s per capita case count of 120 per 100,000 has risen by nearly 50 percent since last week, but surges around the country mean that New Hampshire’s numbers remain far below the national per capita average, which is 176. The states with the highest numbers are now New York and Rhode Island, at 353 and 351, respectively.

Even though the case count in New Hampshire has increased again, the burden on hospitals has remained roughly steady the last week. The total number of hospitalizations has dropped slightly from a week ago, but the number of available intensive care unit beds has also declined. There are now just 14 staffed adult ICU beds available in the state, out of a total of 233. This is less than was available last week, but is still more than were available at the beginning of December when hospitalizations were at their peak.

The good news is that ventilators remain plentiful. Less than a quarter of the state’s inventory is currently in use.

The federally provided monoclonal antibody teams that the state was expecting to arrive this week were delayed due to overwhelming needs in other parts of the country. In a statement delivered on Monday, Gov. Chris Sununu announced that the Federal Emergency Management Agency is hoping to send the teams by next week.

“While we were surprised by the delay in their arrival, we are appreciative of the federal government’s assistance,” Sununu said. “Since making our initial request a month ago, their assistance has become even more critical now as we manage the peak of the winter surge.”

As of Dec. 31, which is the last time the state Department of Health and Human Services updated its long-run statistics on Covid-related deaths, an average of seven Granite Staters were dying of Covid each day, down from a high of 11 on Dec. 25. These numbers are still less than the peak of 11.7 deaths per day during the first wave.

As of Wednesday, there were 12,149 current Covid cases diagnosed in New Hampshire. There have been 208,073 confirmed cases and 2,013 Covid-related deaths in the state since the pandemic began.

Vaccination rates continue to rise, though state and federal vaccination data for New Hampshire remain out of sync.
DHHS data shows that 63 percent of Granite Staters have received at least one dose, while the number from the Centers for Disease Control and Prevention is much higher, at 95 percent. Similarly, DHHS reports that 56 percent of Granite Staters are fully vaccinated, while the CDC’s number is 11 points higher, at 67 percent. The difference between DHHS and the CDC in terms of total doses administered is roughly 692,000.

The CDC continues to recommend that anyone over 5 years old get vaccinated. For adults, they recommend getting one of the mRNA vaccines (Pfizer and Moderna), rather than Johnson & Johnson, but the CDC emphasizes that any vaccine is better than being unvaccinated.

For children between the ages of 5 and 17, the CDC recommends getting the Pfizer-BioNTech pediatric vaccine.

The CDC on Wednesday dropped the minimum age for Pfizer boosters to 12 years old. This means that the CDC now recommends that anyone 12 to 17 years old should receive a booster shot 5 months after their initial Pfizer-BioNTech vaccination. Currently, only the Pfizer-BioNTech Covid-19 vaccine is authorized and recommended for these young people.

Those interested can register for a vaccine or for a booster (including through this weekend’s Booster Blitz) by visiting vaccines.nh.gov or calling 211.