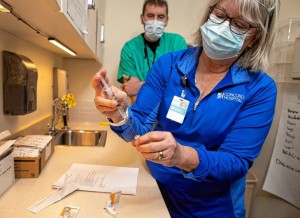 Concord Hospital nurse Maryann Cioffi prepares the first Covid-19 vaccine as nurse Ryan Kosowicz watches on Wednesday morning at the Memorial Medical Building where they will be vaccinating. (Photo by Geoff Forester/Concord Monitor)

Dressed in pale blue scrubs and a white mask, Chris Fore rolled up his sleeve Wednesday morning to receive Pfizer’s Covid-19 vaccine, which was granted emergency use authorization by the FDA just five days earlier.

Fore, an emergency department doctor, was the first in line at Concord Hospital to receive the shot. The hospital has no plans to make the vaccine mandatory for its employees, so Fore, who is also the chief quality officer, was chosen to lead by example. He had no qualms with receiving the vaccine — he had waited for months for this exact moment.

“I really can’t believe we are here prior to Jan. 1,” he said. “The efforts to produce this vaccine is just something that people will write movies and books about for the next 100 years.”

For the last eight months, Fore and his family exercised nearly every Covid-19 precaution, even going so far as to check the case numbers of different counties before leaving the house.

The vaccines offer hope that life might return to normal in the next year.

“It does provide a bit of a much-needed reprieve to a workforce that probably hasn’t even fully recognized how tired they are,” he said.

The vaccines could not come at a more crucial time for the hospital. Recently, they have admitted an unprecedented number of Covid-19 patients. They admit between 15 and 30 new inpatients a day, nearly twice the number they admitted during the first wave of the virus in the spring.

As of last week, the hospital’s intensive care unit was 80% full with only four beds available, according to federally reported data.

The hospital received 300 doses Tuesday as part of the state’s efforts to distribute its first allocation of more than 12,000 vaccines. The doses, once frozen, were thawing upon arrival at the hospital, giving the facility five days to administer them to staff.

To fairly allocate the vaccines, hospital administrators divided staff into three groups according to their level of interaction with Covid-19. Those who provide unscheduled care to patients with emergency conditions, like a heart attack or labor, are prioritized first.

The hospital only has enough doses to vaccinate about a fourth of the staff in this category. They further stratified this group to pick out those who are most likely to treat coronavirus patients like respiratory therapists, emergency physicians, and critical care doctors.

“We can probably get to 80% of that subset of the first wave,” Fore said. “We’re highly dependent on future supplies of vaccine.”

Fore said Concord Hospital has been assured that more doses will come almost every week for the next six months, though the number of doses they will receive isn’t clear. He is also holding out hope for Moderna vaccines, which are expected to be granted emergency authorization by the Food and Drug Administration on Friday.

The hospital is using the CDC’s Vaccine Administration Management System to track who has been vaccinated and when their second dose is due. The state’s own immunization registry, which was quickly built over the last couple of months, was not ready in time to train providers how to use it before the first batch of vaccines arrived.

Beth Daly, chief of the Bureau of Infectious Disease Control in New Hampshire, said the data from the CDC’s system will feed into the state’s own system so providers can eventually switch over.