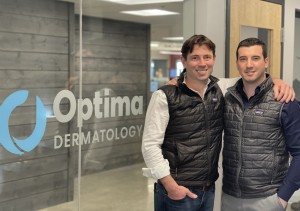 Max Puyanic wants to do for dermatology what he and his partners did for health care: make it more readily accessible.

He believes improving access to skin care will not only save money but save time and, most importantly in the case of skin cancer, save lives.

His new Optima Dermatology, the first of which is opening in February in Exeter while a new stand-alone facility is being built in neighboring Stratham, will be a straighter, more direct line in the diagnosis and treatment of skin disorders.

These facilities – seven are planned for New Hampshire and six in Maine to start – will offer general dermatology and cosmetology services, including pathology, surgery and clinical trial and research, according to Puyanic. Their work, he said, is bound by a mission statement “to treat each and every patient the way we would want our friends and family to be treated.”

For many people, the path to treatment of a skin disorder might first start with a trip to a primary care physician, who might then refer the patient to a dermatologist, who, on average will schedule an appointment in about 90 on average if you’re in New Hampshire, 70 days in Maine.

“You have to wait a long, really long, time to see a dermatologist, and that’s because nationally there’s not a lot of dermatologists,” said Puyanic, noting there are even fewer than the average in northern New England.

Puyanic was part of the startup team in 2012 that founded the Portsmouth-based ConvenientMD walk-in urgent care chain, a new concept at the time that provides an ample alternative to a hospital emergency room visit for non-life-threatening medical issues.

Walk-in urgent care centers today are widely provided, not only by companies such as ConvenientMD and New London-based ClearChoiceMD, but by hospitals themselves. Currently, ConvenientMD has 35 stand-alone walk-in clinics in place or under development in New Hampshire, Maine, and Massachusetts.

As Optima CEO, Puyanic is partnering once again with Ben Collins, chief growth officer as he was with ConvenientMD from 2014 to 2020. Puyanic left ConvenientMD in March 2020 as an entrepreneur in search of another problem to solve.

“The access problem has largely been solved for urgent care. We were really proud that we had built a model that was providing a higher level of care and that other members of the medical community were starting to emulate,” said Puyanic. “We felt like we’ve accomplished what we’re trying to accomplish.”

Puyanic said he and Collins talked a lot about barriers to certain medical specialties.

They asked themselves, Puyanic said, “What other specialty is out there that has a big problem that we can help solve using some of the things that we’ve learned at ConvenientMD?”

The answer? “We did lots of research on every specialty, and there were other specialties also that are problems, but we basically determined that that dermatology had the most significant problem in New England that we can address,” said Puyanic. 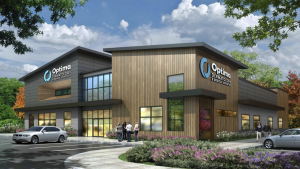 This rendering depicts the planned 10,000-square-foot Optima Dermatology center in Stratham, with an opening by the end of the year. It is one of several centers planned for New Hampshire and Maine. (Courtesy photo)

What the research showed, according to Puyanic, is that skin cancer is the most prevalent form of cancer in the country. He notes that New Hampshire has among the highest rates of melanoma in the country.

“There’s 7 million cases of all cancers every year in the United States. But 5.4 million of those are skin cancer. There’s more skin cancer than all other cancers combined,” said Puyanic.

And it’s among the fastest-growing cancers. The annual cost of treating skin cancers in the U.S. is estimated at $8.1 billion: about $4.8 billion for nonmelanoma skin cancers and $3.3 billion for melanoma.

“That’s the demand side. But what’s happening on the supply side of access? Well, there’s not a lot of supply,” said Puyanic.

Compared to other medical specialties, fewer doctors specialize in skin disorders. And those who do aren’t initially inclined to come to this region. So there’s an intense effort by Puyanic and Collins to convince dermatologists – along with the support staff they need – to work for Optima.

During an interview at Optima’s corporate offices on Heritage Avenue in Portsmouth, Puyanic emphasized the use of Mohs procedures in the treatment of skin cancer. The Skin Cancer Foundation recognizes Mohs micrographic surgery as the most effective technique for treating many basal cell carcinomas and squamous cell carcinomas, the two most common types of skin cancer.

A Mohs procedure – from diagnosis to lab pathology to removal – can be done in a single visit at Optima. “You’re cancer-free when you walk out of the office,” said Puyanic. Diagnosis of other disorders can take up to three days.

Next comes the repair by the Mohs surgeon. “They’ve been trained like a plastic surgeon, and they do those same kinds of repairs all the time,” said Puyanic. “So their experience with that same type of repair is going to be higher than a plastic surgeon and get the least amount of scarring and the best outcome if you have this done in the office by a fellowship trained Mohs surgeon.”

Collins said Optima is seeing some success in getting the people it needs to start staffing up its centers. “The goal is to find really, really talented physicians and explain our model,” said Collins. “It’s a differentiated model and then we give them the tools they need to make sure that we’re actually solving this access problem, which is a key issue.”

To build its capital and infrastructure, Optima has partnered with a group of practices in Ohio and Indiana. “That’s going to help us to fund our growth and continue to grow into places that we think need access the most, which is New Hampshire, Maine – the Northeast in general,” said Puyanic.

The first of the Optima centers in New Hampshire is opening in February on Hampton Road in Exeter. Appointments are being accepted now. It is a temporary location as a 10,000-square-foot standalone center is constructed near the Market Basket on Portsmouth Avenue in Stratham, expected to open by the end of this year. Another center is in development at the corner of Routes 111 and 111A in Windham, also expected to open by the end of the year.

“We’re going to hit all key markets in the state. We’re going to build big beautiful facilities that are state-of-the-art with the latest technology and the latest equipment,” said Puyanic. “We’re going to hire only fellowship-trained Mohs surgeons into the state and make sure that we’re providing this very high level of care.”

They plan to partner with primary care physicians in certain, less accessible parts of the state to provide direct telehealth consultations on skin disorders. As well, they want to partner with employers to provide free skin screenings.

“There’s always been this huge amount of demand, but no one has really kind of innovated on the delivery model,” said Collins.