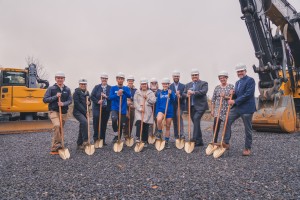 Sally Veitch, center, a trustee and 1966 graduate of Colby-Sawyer College, the groundbreaking ceremony to mark construction of a $2 million athletic pavilion on campus – the first major construction project there since 2017.

The 2,700-square-foot pavilion — the New London college’s first major construction project since the completion of the Davidow Center for Art + Design – will be constructed by the Middlebury, Vt.-based Bread Loaf Corp., and is the first of two major construction projects slated to begin over the course of the academic year. Colby-Sawyer announced plans earlier this year to build a new home for its School of Nursing & Health Sciences, with construction on the $15 million, 20,590 square-foot facility set to begin in spring 2023.

The 2,700-square-foot pavilion is scheduled to open at that time. It will include team meeting spaces, an athletic training room and a covered picnic area, among other spaces. It will also feature wireless internet, allowing for enhanced live streaming of college athletic events from nearby fields.

The project is funded through a $1.5 million gift from Colby-Sawyer College trustees Sally Shaw Veitch a 1966 graduate of the school.

Veitch said that a structure at the Kelsey Athletic Campus has been a necessity for some time. “It was obvious there was a need for a pavilion for our athletic teams for locker rooms and changing,” Veitch said. “Athletics tends to be my interest. It is an important part of the academic experience for students.”