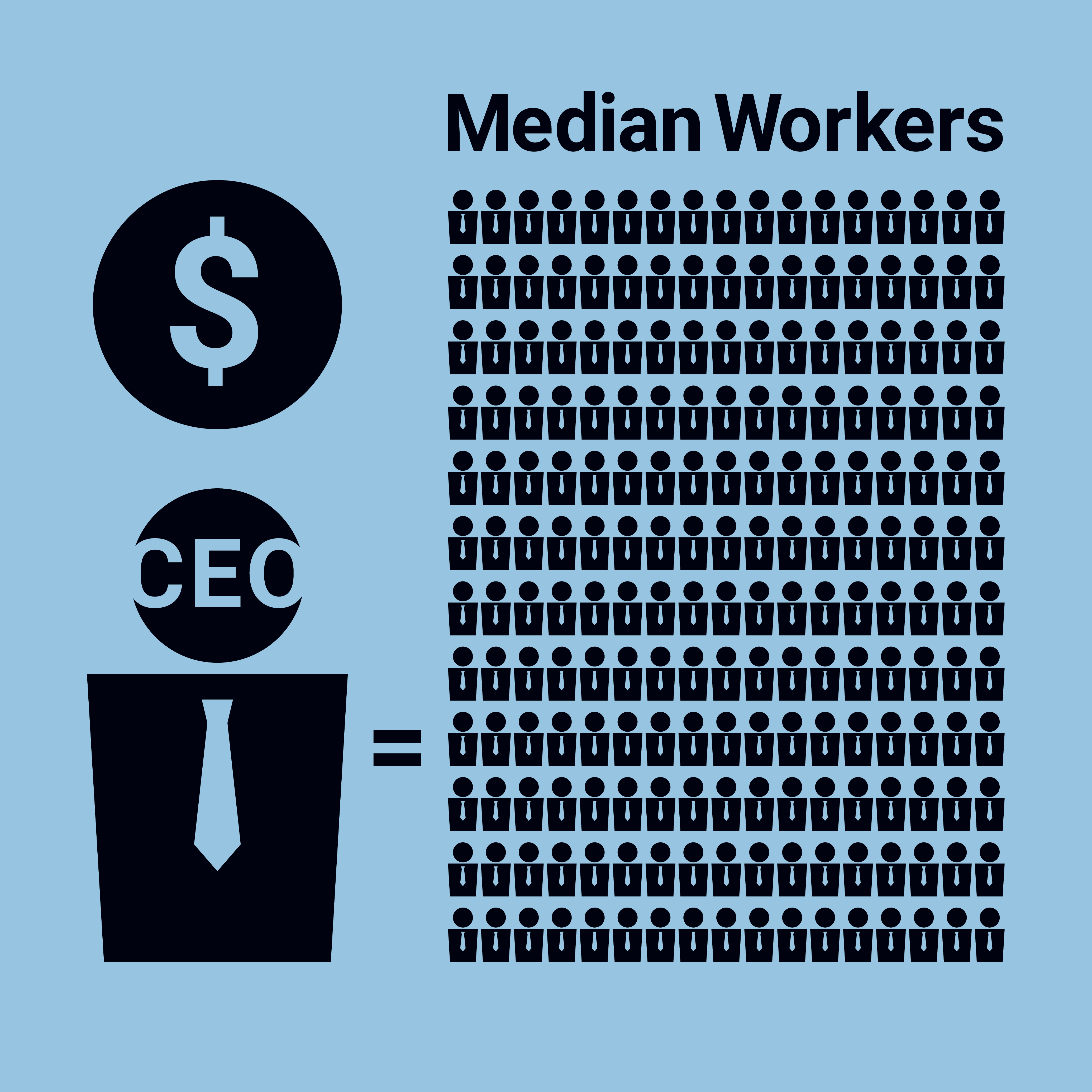 The disparity between the pay of the CEO and a typical employee at a publicly traded company continues to grow in the U.S., and companies with substantial New Hampshire ties are no different, according to proxy statements released during the peak of the Covid-19 pandemic.

The average CEO compensation package for the 11 publicly traded companies headquartered in New Hampshire was $3.5 million, up 22% since 2018. The median employee wage was $67,000. That means the differential in CEO and worker pay was 53 to 1, far smaller than the national ratio, but a lot higher than the 34 to 1 disparity in 2017.

It appears that more shareholders are becoming disgruntled by rising executive pay, though they are still a small minority. About 15% of shareholders in the companies examined by NH Business Review either voted against or abstained on their annual non-binding say-on-pay votes, up from 9% four years ago, mirroring national trends.

CEOs from 11 of the 41 companies, including Hampton-based Planet Fitness and VFC Corp., parent company of Stratham-based Timberland, have agreed to cut their pay or give up their salary temporarily. But the salary reductions amounted to a small percentage of their compensation package, which is primarily based on equity and cash incentives. The stock market, while volatile, has been going up, increasing the worth of those packages.

These figures all pertain to the last fiscal year, which in most cases was the 2019 calendar year, but they were mostly disclosed in proxy statements released in the spring, at the height of the pandemic-sparked economic turmoil.

Since mid-March, when the pandemic began in New Hampshire, more than 6,000 people have tested positive for Covid-19, and nearly 400 have died, about three-quarters of them in nursing homes or other long-term care facilities.

Genesis HealthCare, based in Pennsylvania, is the largest owner of such facilities in the state with more than 35 locations employing about 3,000 workers (over 5% of its workforce).

Most had no outbreaks, but six did. They were Bedford Hills in Bedford; Clipper Harbor, Portsmouth; Hackett Hill, Manchester; Mountain Ridge, Franklin; Ridgewood in Bedford; and Crestwood Center, Milford.

As of July 14, some 223 patients and 102 workers in Genesis facilities tested positive for Covid-19, and 70 have died. Most of the deaths were residents, but at least one was likely an employee, since the federal Occupational Safety and Health Administration has launched an investigation into a Covid-related fatality at Hackett Hill.

Genesis had been suffering some financial difficulties in the past few years. It reported losses of $1.3 billion in 2017 and 2018, and barely broke even in 2019, though in the first quarter (mostly before the crisis hit) reported a net income of $38 million. Despite this turnaround, the stock price has sunk so low that in April, the SEC issued a delisting warning.

While Genesis didn’t cut CEO pay because of the pandemic, the National Healthcare Corporation did. 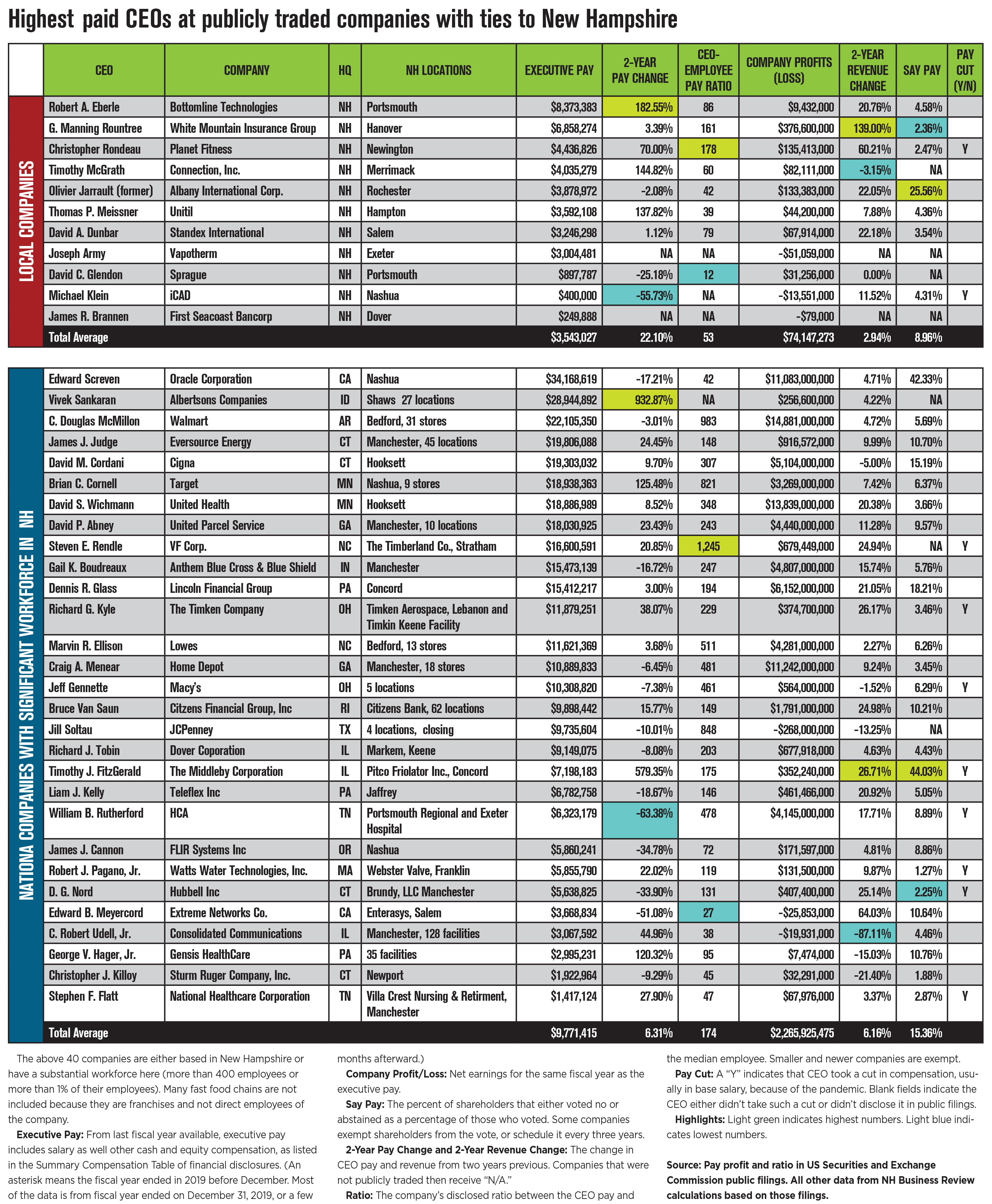 The Tennessee-based firm also has a nursing home in the Granite State — Villa Crest Nursing and Retirement, in Manchester, which experienced a Covid-19 outbreak infecting 54 residents and 45 staffers, killing 15. Its CEO, Stephen Flatt, was paid $1.4 million, one of the lowest salaries of the national companies examined, though that pay has gone up nearly 28% in two years, and it was 47 times the median National Healthcare employee.

NHC lost $26.8 million in the first quarter of this year, and executives took a voluntary reduction in their salaries, according to an SEC filing, though it did not spell out the extent of that cut.

CEOs of other major companies operating in New Hampshire have agreed to take salary cuts, including McDonald’s, Southwest Airlines and mall owner Simon Property Group. Planet Fitness CEO Christopher Rondeau was one of the few top executives of companies headquartered in New Hampshire to do so. (He said he would forgo all salary until half of the company’s gyms are open.) The company laid off all the employees at its company-owned gyms, but he “firmly believes that we should share in this at the leadership level of the organization, starting at the top with him,” said spokesperson Julia Young.

That is mainly because its median worker pay went up more than $3,000, to $13,330. VF CEO Steve Rendle also received an increase of nearly $3 million, bringing his compensation package to $16.6 million.

The outdoor apparel company was doing well before the pandemic, which hit the company early because it has major interests in Asia. In the first quarter of this year, VF lost $483 million dollars.

Rendle took a four-month pay cut of half of his $1.3 million base salary. Other VF executives also took pay cuts. Their full salaries resume in August.

“Our executives voluntarily reduced their salaries because it was the right thing to do in terms of protecting the company’s financial liquidity and demonstrating the shared journey the entire VF family is on as we adapt to the global pandemic,” said spokesperson Lori Mayer in a written statement. “The financial resources freed up by this decision also have helped us to avoid furloughing or reducing salaries for any of our retail and distribution center employees.”

A combination of part-time workers in the company’s retail stores and low-wage production workers overseas, brought down company’s median pay, she said.

“Our median employee salary is lower than it might be in other industries and, therefore, our pay ratio will always reflect that structural reality,” she said. The company offered additional pay and benefits to those working on the company’s e-commerce business, she said.

The two highest-paid executives in absolute terms among the 41 companies we looked at also had highly paid employees.

Oracle “Chief Corporate Architect” Edward Screven, topped the list, with a $34 million pay package — far less than the $108.3 million paid to the company’s founder, Larry Ellison, the previous two fiscal years. But the numbers are old, considering that the company’s most recent fiscal year ended May 31, 2019. The average employee at Oracle — which has a facility in Nashua – was paid more than $84,000.

In New Hampshire, Bottomline Technologies CEO Robert A. Eberle was compensated at $8.4 million for the last fiscal year ending June 30, 2019, a 182.5% increase over the past two years, and only slightly lower than the company’s net income of $9.3 million. The company reported a $7.5 million net loss in its last quarter (the third its fiscal year). Its median employee pay was $97,800 last year.

John Stevens, the Portsmouth-based financial technology’s firm spokesperson, pointed to the company’s revenue growth, particularly in cloud-based subscriptions, and its rising stock price. It has to pay its top executives top dollar because they “are considered very attractive candidates by other companies and are frequently targeted for employment opportunities by … financial institutions and other technology companies,” he said in a written statement. “In many cases, other companies are able and willing to offer significantly higher compensation packages than we currently provide.”

The Middleby Corp., owner of Pitco Friolator Inc. in Concord, reported the biggest increase in CEO pay last year, to $7.2 million, up 573% from 2017, before current CEO Timothy J. FitzGerald, took the job. The pay increase caused some consternation among shareholders. Some 44% either voted against or abstained in the last say-on-pay vote, the largest such opposition among the companies examined.) Because of that big increase and a slight decrease in worker pay to $39,153, the company’s CEO pay ratio shot up from 26 to 1 in 2017 to 175 to 1 in 2019.

(Middleby’s two-year CEO pay increase was topped by Albertson’s, owner of the Shaw’s supermarket chain, which had a 933% increase, to $28.9 million for Vivek Sankaran, who wasn’t the CEO in 2017.)

In its written statement, Middleby attributed the steep CEO pay increase to a large equity award given every three years. It also noted that this year, FitzGerald (and other executives) gave up base salaries in exchange for the equivalent in equity awards.

At Exeter-based Vapotherm, CEO Joseph Army got the biggest one-year pay raise, a 380% increase, to $3 million. The company posted a nearly $51 million net loss that year, but revenues rose 55%. And since the medical equipment firm makes respirator equipment to help patients suffering from Covid-19, it is rapidly expanding, and has already hired 90 new staff.

“Importantly, all of our NH-based employees receive equity awards, not just our CEO, ensuring we all share in our collective success. That is but one reason Vapotherm has been named one of the ‘Best Companies to Work for in NH’ for four consecutive years,” said the company in a written statement.

Indeed, said Michelle Veasey, executive director of New Hampshire Businesses for Social Responsibility, when looking at what makes a company sustainable, CEO compensation is not the most important thing.

“It’s about asking about the bottom person, instead of just focusing on the top. It is about growing everybody in your company,” she said.