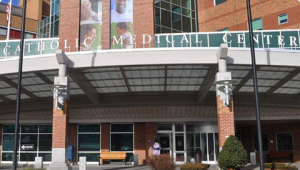 Medical Center in Manchester has agreed to pay $3.8 million to resolve claims that it violated a federal anti-kickback law by making payments to a cardiologist who referred patients to its New England Heart Institute, U.S. Attorney John Farley announced Wednesday.

In a statement, Farley did not name the cardiologist and said that CMC did not admit liability in the settlement.

According to the statement, CMC’s cardiologists provided “free call coverage” while the unnamed cardiologist was on vacation or was not available for patients. In return, the doctor provided referrals worth millions of dollars to the hospital over the decade in which the arrangement existed.

Farley said that, “because CMC submitted claims for payment to Medicare, Medicaid, and other federal health care programs for the services referred by the cardiologist, the United States alleged that these claims were the result of unlawful kickbacks.”

CMC spokesperson Lauren Collins-Cline said the call coverage arrangement was initiated “almost 15 years ago with the input of legal counsel in order to provide high-quality care for patients.”

That arrangement, she said, “is no longer in place.”

She said CMC agreed to the settlement “in order to avoid long and costly civil litigation” even though it “vigorously disagrees with the government’s allegations that this arrangement violated federal law.”

“CMC holds itself to the highest ethical standards in patient care and business conduct,” Collins-Cline added. “That’s embedded in our mission, and will always remain our highest priority.”