But vast majority in NH rely on donors’ dollars 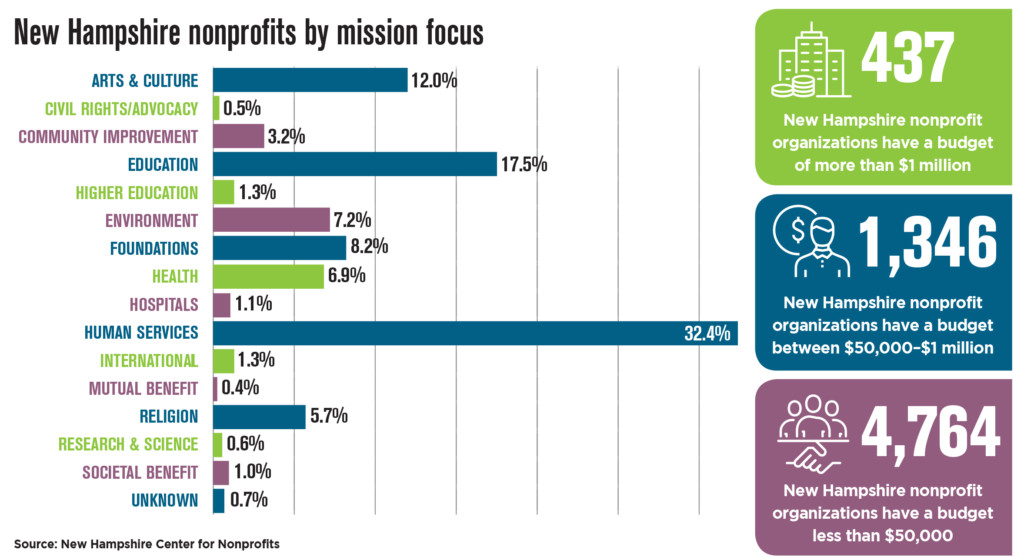 Nonprofit organizations in New Hampshire raise more than $13 billion a year and have $40 billion in assets, employing some 122,000 people, or more than 16% of the state’s workforce, and paying about $4.4 billion in wages.

But while most nonprofits in the state are charities, and they do a lot of good work, the nonprofits making most of that economic impact are not the kind you think of when you’re asked to make a contribution, either through the United Way or individually to the organizations.

That economic impact comes from a tiny fraction of Granite State nonprofits, primarily hospitals and universities. The lion’s share of their revenue comes from their business, from customers and from taxpayers (Medicare, Medicaid, financial aid and government grants). They are businesses, and they usually produce a surplus that can easily exceed a half-billion dollars.

NH Business Review analyzed Internal Revenue Service data on New Hampshire’s 8,711 nonprofits, of which more than 3,000 produced any revenue during their last filing.

Here are some of the things we found.

• The 10 largest nonprofits by revenue are responsible for $6.3 billion, almost half the nonprofit revenue in the state, and 43,000 — more than a third — of all the nonprofit employees.

• Of the top 10, seven are hospitals and one is a major medical practice (Dartmouth Hitchcock Clinic), one is a university (Dartmouth College, the biggest nonprofit in the state) and one is an insurance company (Northeast Delta Dental). Indeed, 18 hospitals in New Hampshire account for nearly $5 billion in revenue and the top 10 colleges account for more than $2.5 billion.

• The top 100 of all nonprofits organizations accounted for more than $11.5 billion in revenue and nearly 90,000 employees, 85% and 72%, respectively, of the nonprofit sector. Together, the top 100 raised nearly $700 million more than what they spent on their nonprofit function.

• Of the top 100 nonprofits, only seven get most of their revenue from contributions. The largest one that does is the New Hampshire Charitable Foundation, which is the 28th largest nonprofit overall, by revenue. The biggest United Way, Granite State United Way, with $9.47 million of revenue, ranked 146th. Even all the United Ways combined wouldn’t make it to the top 100. 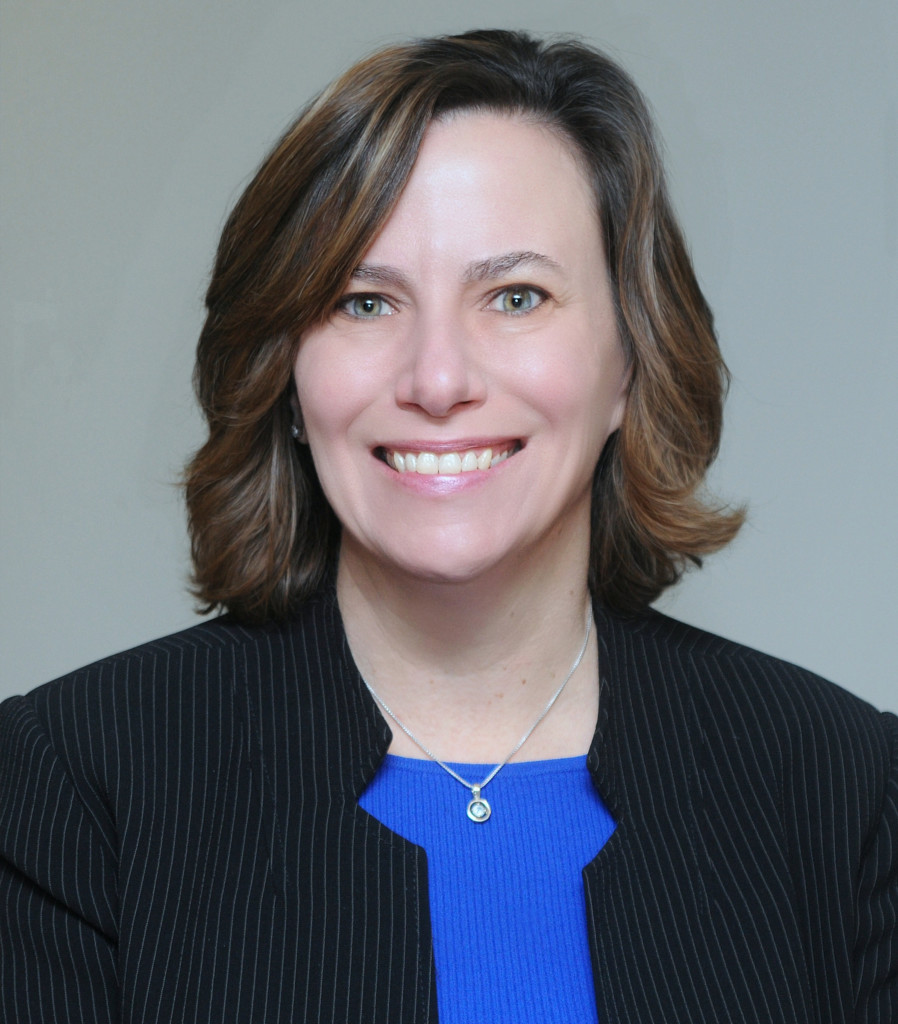 Kathleen Reardon is executive director of the New Hampshire Center for Nonprofits, which released its own report about the sector’s economic impact in August.

Figures like these are no surprise to Kathleen Reardon, executive director of the New Hampshire Center for Nonprofits, which released its own report about the sector’s economic impact in August, using the same IRS data as the Business Review. The numbers are a little different, because the center just looked at 501(c)(3) organizations, excluding groups like credit unions, business organizations (like chambers of commerce) and some political groups.

The 6,547 groups examined in the center’s report (2,500 of which were employers) raised about $11 billion and accounted for 15% of the state’s workforce and about $4.6 billion in wages.

Reardon was quick to acknowledge that an even tinier fraction of nonprofits account for the overwhelming economic impact.

“Absolutely,” she said. “They are businesses. They get their money from their business.”

Hospitals, for instance, get nearly all of their funds through their business, though many have a separate arm that primarily raises outside money for the hospital.

For instance, Concord Hospital, the fourth largest nonprofit, raised 95.6% of its more than $547 million in revenue primarily from its patients and insurance companies (including Medicaid and Medicare). Concord Hospital Trust raised 75% of it’s $4.8 million in revenue via contributions. (Full disclosure: This writer has contributed to the revenue of both entities, though much more to the former, as a patient.)

The largest nonprofit, Dartmouth College, raised nearly 40% of its $1.44 billion in revenue primarily through students, but it also raised 27% from contributions, primarily by alumni. Much of the rest of the revenue comes from investment income — its assets of $8.2 billion include a large endowment and government grants. 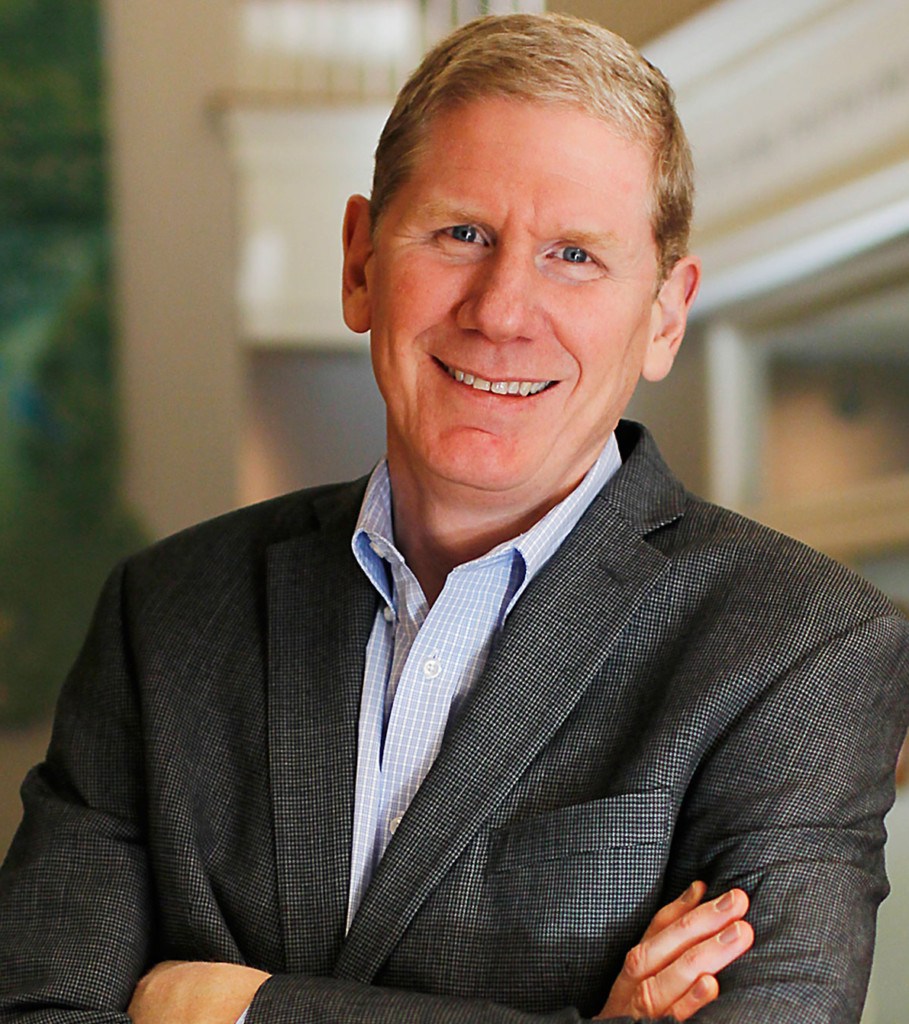 Almost all donors are individuals; only a tiny fraction are businesses, says Richard Ober, CEO of the New Hampshire Charitable Foundation.

These are the types of businesses that usually can be found on lists of the biggest nonprofits in the state. (NH Business Review’s Book of Lists is no exception.) But lost in the glare are the vast majority of nonprofit charities that get their money from other contributions.

When NH Business Review told Richard Ober, CEO of the NH Charitable Foundation, that it was developing such a list, he expressed his gratitude.

“There are different kinds of nonprofits, and it is important to differentiate between them,” Ober said.

It is these groups that depend on giving, and giving can be affected by a host of factors, ranging from the state of the economy to whether it is an election year. (The latter is particularly pertinent this year in the first-of-the-nation primary state, where political donations eat into the discretionary dollar.)

This is a personal matter, since almost all donors are individuals, and only a tiny fraction are businesses.

“Most people think businesses do a lot of giving, because when they do it, you see it,” Ober said.

New Hampshire donors seem stingier than most (the state ranks 47th in donations as a percentage of disposable income), but that’s because it is such a secular state, said Ober. If you take out contributions to churches, Granite Staters give just a little less than normal. The state also ranks high when it comes to volunteering.

But such statistics, based on a charitable deduction people take on their taxes, don’t really reflect what’s happening with charitable giving in New Hampshire.

For one, said Ober, “We see what New Hampshire is giving, we don’t see where it is going.”

For another, only about a fifth of those who contribute itemize their taxes, and that number is going down because of the recent tax reform, which increased the standard deduction.

In fact, you might have thought that impacts of the Tax Cuts and Jobs Act of 2017 would be reflected in the nonprofit organizations’ filings in 2018. But so far, nobody has been able to discern much of an effect, said Karen Moynihan, senior director of development at New Hampshire Catholic Charities, which raised $83.3 million in the period, but it actually gets 37.5% from contributions. That’s because of the income it receives from a number of nursing homes that provide most of its revenue. 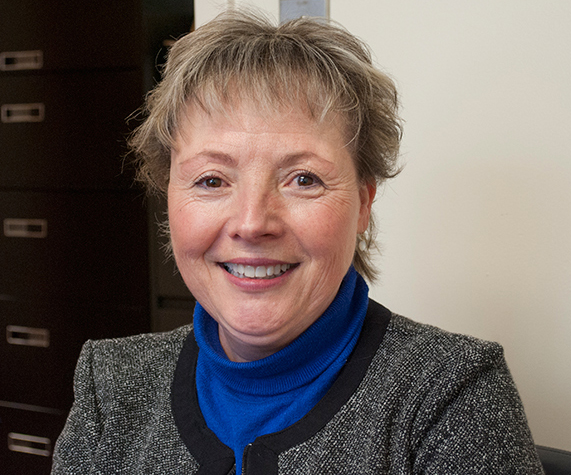 Karen Moynihan of New Hampshire Catholic Charities says businesses use donor-advised funds or clump their donations together to gain a tax advantage.

“People won’t really know how it will affect them until they file in 2019,” she said.

But she has noticed a trend. Some businesses are choosing to clump their donations together so it will be large enough to be worth itemizing. Others are using donor-advised funds, which manage giving so that there will be more of a tax advantage.

Nationally, there has been evidence of a decline in donations, but in New Hampshire, Moynihan said, she has heard anecdotally, “there hasn’t been a huge drop-off.”

For others, it is too early to tell. United Ways are in the midst of their giving campaign. That has become harder in recent years, because their “bread and butter” are small payroll deductions at businesses, said Patrick Tufts, CEO of the Granite United Way, the largest United Way, which serves a majority of communities in the state.

But with mergers and acquisitions, fewer businesses are based in New Hampshire, and the charity often has to go out of state to get permission to come into the workplace and set up the deductions.

But nonprofits can merge too. That’s what happened to many of those local United Ways that became part of Granite United Way, as well as the merger a few years ago of Families in Transition and New Horizons for New Hampshire — that new entity raised $9.1 million, two-thirds of which came from contributions.

Most charities in the Book of Lists might be familiar to New Hampshire residents, but not many may have heard of Nuday. That’s because the money goes elsewhere. The Windham-based group raised some $39.4 million for those affected by the war in Syria. Attempts to contact it were unsuccessful.

In the end, for New Hampshire charities, the problem isn’t that there is a declining supply of contributions but increases in the demand for their services.

Despite the strong economy, those on the bottom are struggling more than ever because “public budgets are restrained, but the problems aren’t constrained,” said Ober.

And if there is another downturn, things could be even worse, he said.

“The irony is that more beds at the shelters, more patients at the treatment centers, doesn’t mean that revenue is going up. And unfortunately, when there is a decline, the income to nonprofits goes down, just when the need goes up.”