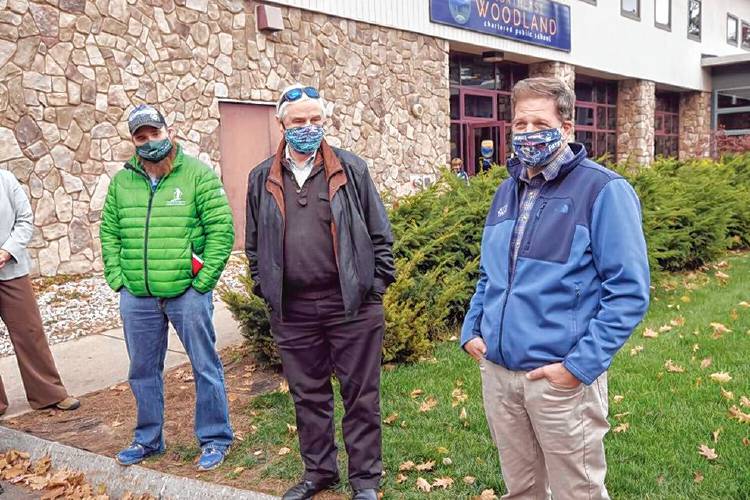 “I’m not a trained mediator, but I think it’s a manageable situation,” said Bradley.

Northeast Woodland is taking the Economic Council to court, and on Oct. 13 will ask a Superior Court judge to prevent the council from selling Lot 5 at the Conway Tech Village, which the school uses for outdoor classrooms.

Jason Gagnon, chair of the board of trustees, for the school that started last year with 147 students, said he welcomes Bradley’s assistance.

“Since Northeast Woodland moved into the Tech Village, the school has worked hard to be a good neighbor and keep open lines of communication. We are grateful to Senator Bradley for his offer to bring our two organizations together and continue to hold hope that we can work with the Mount Washington Valley Economic Council in pursuit of our shared goals,” Gagnon told the Sun.

Jac Cuddy, head of the Economic Council, declined to comment due to the pending litigation.

The school also rents indoor space, including 12 classrooms, from Granite State College at the Tech Village. The school has options to buy both the land and the classrooms. And both are being challenged by the council.

The Tech Village is set up as condominiums. The Economic Council owns one and Granite State College the other.

It appears the Economic Council no longer wants the school to be in its business park, as evidenced by a letter by its attorney to the school on Sept. 15. In it, attorney Thomas Pappas of Primmer Piper Eggleston & Cramer of Manchester, says, “After the school resumed in-class activities on Sept. 2, the school has continued to disrupt and interfere with other tenants in the Tech Village, including the influx of cars twice a day that inhibits tenants’ access and parking as well as other activity by the school both outside and inside the building.”

That letter followed a stream of letters between lawyers of both organizations starting in January, when Cuddy told the school it could no longer use open land and trails on Tech Village property.

The school claims it can use the land based on a 2004 Zoning Board of Adjustment ruling that mandated the Economic Council keep open that space when it allowed it to locate in a residential zone.

A letter from Pappas said the school was violating its lease. With the lease challenged, that includes the option to buy, the purpose of Northeast Woodland taking the Economic Council to court is stop it from selling the land out from under it.

Bradley said the traffic problem cited by Pappas is a “management issue.” He points to the Carpenter Elementary School in Wolfeboro, which is off Route 28, that manages a similar situation.

“Everyone knows to get there before 3 p.m. or be prepared to wait,” he said, adding that the Wolfeboro situation is worse because traffic is tied up on a state road while the problem in Conway is mostly limited to parking and internal travel on Technology Lane, the access road to the Tech Village.

Overall, Bradley said he doesn’t see an incompatibility problem with a school in the Tech Village’s business park. “The mission of the MWVEC has changed somewhat with the affordable housing project, something that is not normally a part of a business park,” he said.

Bradley is a longtime advocate of both the Tech Village and the charter school. In February, he introduced Senate Bill 747 to allow the state Department of Education to go around the legislative process in which the Joint Legislative Fiscal Committee had twice rejected a $46 million federal grant to increase the number of charter schools in New Hampshire.

Of the Tech Village he said, “It’s obviously a win-win for both the school, which is viable and embraced by the community, and the Economic Council, which would have the building (the Granite State space) occupied and property developed.”

Until recently, the Tech Village, which sits on 61 acres that includes seven lots, has been unsuccessful in selling its lots. But last year, the Conway Planning Board OK’d a plan for Avesta Housing to build 156 workforce and senior housing units at the end of Technology Lane. This year, the Tech Village received a $200,000 federal grant to extend the road to the Avesta site. The new road also will give access to two other lots, which the Redstone Group is buying for an office building.

The dispute over the classroom space at the moment appears to be in limbo. Northeast Woodland has exercised an option to buy the classroom space, but the Tech Village, which has a first right of refusal to purchase it, said there are problems with the purchase and sales offer. Northeast Woodland says the purchase and sale agreement was in good order and that the Tech Village has allowed its right of first refusal to expire.

Lisa Thorne, director of communications of the University of New Hampshire, of which Granite State is part, declined to comment on the purchase and sales agreement.

“The property owned by Granite State College in the Conway Tech Village is for sale. Because of the nature and reality of real estate transactions, we cannot comment on the specifics of pending transactions,” she said.

Woodland is committed to that location and willing to fight for it, says Gagnon. “We believe it’s the best location in a building that is set up for education,” he said. “We are prepared to stand up to contractual obligations agreed to. We are asking them (the Economic Council) to live up to the obligations they put on paper when they invited us there. We are not going to walk away.”