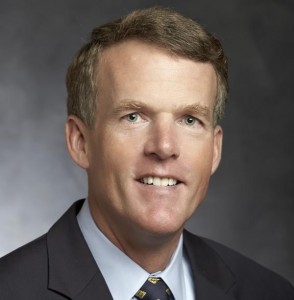 Albany International Corp. has a new man at the top.

The company announced on Tuesday that A. William Higgins, who has been serving as the company’s board chairman since February 2019, has been named CEO of the Rochester-based textile and composites manufacturer.

Higgins takes over for Olivier Jarrault, who was named CEO and president of the company in February 2018. No reason was given for Jarrault’s decision to step down from the post, although the company issued a statement that he resigned “by mutual agreement with the board.”

“The board and I have agreed that this is the right time for new leadership at Albany,” said Jarrault.

“We are grateful to Olivier for the important contribution he has made to our business,” said Erkie E. Kailbourne, the new chair of Albany’s board, in the statement. “Under his leadership, Albany has delivered impressive financial results, significantly advanced its productivity and operational capabilities and attracted first-class talent.”

Higgins, who was CEO at Circor Corp. of Burlington, Mass., from 2008 to 2012 also has held a variety of other senior management positions at Honeywell International and AlliedSignal.

He has been a member of Albany’s board since 2016 and was named chair in February 2019.

“The board and I are confident that Bill is the right person” for the job, said Kailbourne. “Bill is an industry veteran, with a proven track record of strong leadership, and a deep knowledge of Albany’s operations.”