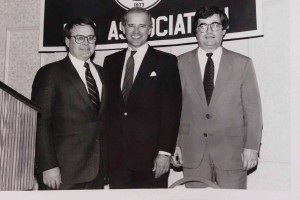 From left are Steven McAuliffe, president of the bar association in 1992, then-U.S.Sen. Joe Biden and former NH Justice John Broderick, who became the bar president in 1993. (NH Bar News photo)

In late January of 1992, then-U.S. Sen. Joseph Biden spoke at the New Hampshire Bar Association’s Mid-Winter Meeting about the unenumerated freedoms contained in the Bill of Rights.

It was the year Bill Clinton was elected president of the United States, the Cold War was declared over, and Microsoft released Windows 3.1.

Biden’s speech at the Sheraton Wayfarer in Bedford, which closed its doors in 2010, was one of many in a career that has taken a variety of twists and turns—and given 2021’s political climate which includes perceived threats to democracy and personal liberties, the speech he gave that evening in New Hampshire reads as a timely one.

The Bill of Rights encompasses the first 10 amendments to the United States Constitution and spells out Americans’ rights in relation to their government. It guarantees a broad range of liberties, such as freedom of speech, press, and religion.

Biden, who is an attorney, argued that the Ninth Amendment offers protections beyond what are listed in the Constitution and is the reason why the Bill of Rights has succeeded in maintaining personal liberties and freedoms like no other nation in history.

Nowhere in the Constitution, Biden said in his speech, does it say specifically that it is not a crime to teach foreign languages to children or that it’s alright to marry the person one choses.

“This debate over such ‘unenumerated rights’ form the crux of my disagreement with Judge Bork, and was the reason I felt compelled to lead the fight in the Senate against this otherwise honorable, brilliant and decent man,” Biden said to the crowd of over 270. “Judge Bork believed that the danger to democracy from acknowledging unenumerated rights is greater than the danger to freedom posed by discarding them.”

In 1987, then-Sen. Joe Biden, D-Del. – who was running for the Democratic nomination for president at the time – was serving as chair of the Senate Judiciary Committee, responsible for leading the Supreme Court confirmation hearings of Robert Bork, whose nomination to the high court was ultimately thwarted.

Biden’s invitation to speak at the bar association’s Mid-Winter Meeting can be traced to his 1988 campaign for president and the friends he made in New Hampshire at that time.

“The genesis of him coming was a connection from his campaign for president in 1988,” bar association Executive Director George Moore, said. “There were a group of us who were on his executive committee, including Steve McAuliffe, John Broderick, myself, Dick Swett and others. Being up here as much as he [Biden] was allowed him to make friends with a lot of people who felt they knew him. He’s naturally a very likeable guy.”

“Steve and I went to Wilmington, Del., for Biden’s announcement and I’ve known him ever since,” Broderick said. “He’s a very gracious and understanding man.”

Biden’s speech in 1992 refers to rhetoric from national leaders at that time who were “criticizing” the American legal system in a way that has become familiar in recent years.

“Let us remind the political critics of our profession that the framers consider the right to a lawyer — as well as the right to a jury, even in civil cases — so fundamentally that these guarantees are protected in the text of the Bill of Rights,” Biden said. “That is not to say that our modern legal system is perfect: it has its faults as we all know. But the overheated rhetoric we have been hearing from some national leaders goes well beyond reform, to demagoguery.”

According to Moore, when Biden spoke at the bar association in 1992, there wasn’t the response that might be expected today.

“You didn’t have a visceral reaction that said, ‘Well, a bunch of liberal Democrats got one of their guys to come up.’ In fact, he [Biden] was a national statesman,” Moore said. “You might disagree with him—certainly there were a number of conservative republicans in the bar association, but they didn’t take umbrage to Biden being invited up here. But for some of the relationships Biden made up here in New Hampshire we wouldn’t have been able to get someone of his notoriety.”