Plenty of bills became law in 2019, and here are some key ones 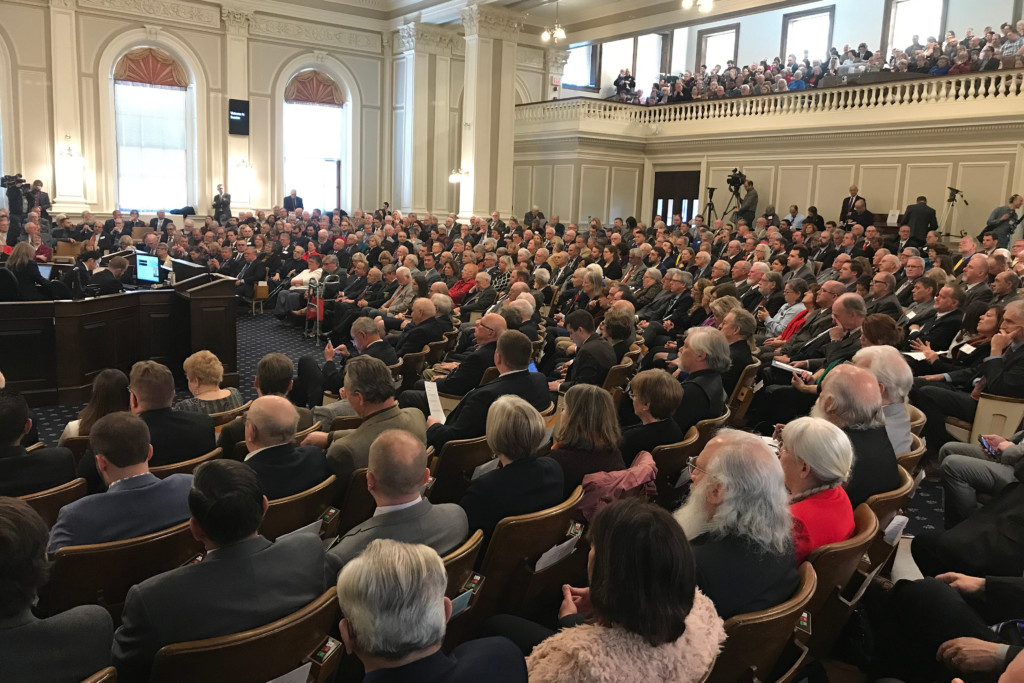 You might think nothing happened during the last session of the New Hampshire Legislature since so much of the focus in recent months has been on the 55 bills passed by lawmakers only to be vetoed by Gov. Chris Sununu, with the governor winning on all but two override votes.

But, as Sununu pointed out, he also signed 333 bills this session and let another nine go into law without his signature. And while none of these laws might have as much of an impact as some of the vetoed bills — such as raising the minimum wage and net metering cap or starting a new family and medical leave program — about 100 of them are significant to business in one way or the other.

Not all of this is going to happen at once. The state has yet to do much to implement the driverless car bill, for instance, but there are excellent odds that you might be able place a bet on next year’s Super Bowl.

Senate Bill 242  — the legislative response to the U.S. Supreme Court’s decision allowing states to charge a sales tax on online purchases — was the only bill Sununu’s press office mentioned when asked what bills the governor thought were important for business or that he was particularly proud to sign. And the Democratic leaders of both the House and Senate agreed it was one of their top accomplishments.

The Wayfair decision requires New Hampshire businesses to collect the sales tax of all states — and thousands of local governments — if those businesses sell a product to a customer in one of those jurisdictions. This has caused havoc for companies like Lupine Pet, an accessory business employing 65 people in Center Conway. Some 15% of its business is from online internet sales, half directly and half via Amazon.

It isn’t so much the actual money but the expense of compliance, said Scott Badger, the company’s cofounder and vice president of sales.

Software that handles the task costs $20,000 a year and then there are the multiple filing fees — often $400 a pop for each jurisdiction numerous times a year. Large companies can swallow the costs and tiny companies are below many of the sales tax’s thresholds, but “it’s clearly a brake on small business in this state and every state,” Badger said.

SB 242 can’t undo the decision, but it can throw up a couple of roadblocks.

Under the new law, jurisdictions that wish to collect the tax in New Hampshire have to notify the attorney general’s office 45 days in advance before collection, so it can rule on the constitutionality. And businesses — though they are free to pay the tax — are supposed to report collection attempts to the AG’s Consumer Protection Office.

For Badger, who is already proactively trying to work with the states where he sells his product, the new law isn’t much of a help, he said.

“We felt we really had to move forward before this new law became a law, so for us it’s like closing the barn door after it was too late,” he said. He said it would have been something of a gamble to ignore a tax-payment request in any case, because it “might have put us in an exposed position. There are very few situations that are not going to be a constitutional request.”

So far, no state has contacted New Hampshire since the law went into effect on July 19, and fewer than 10 businesses contacted the state, said Samuel Garland, an attorney of the AG’s civil bureau.

Garland declined to comment on whether any of those businesses were reporting collection efforts, or whether they just had questions about the law. Garland emphasized that the AG can’t give tax or legal advice.

“We don’t want businesses to think we can defend them,” he said. “We do have an enforcement mechanism and we will handle it on a case-by-case basis. We are taking this very seriously.”

Unlike casino gambling, sports betting passed with little controversy. The New Hampshire Lodging and Restaurant Association, for instance — a fierce opponent of casino gambling — was neutral on the legislation because it wasn’t seen as taking business away from existing establishments, said the association’s president, Mike Somers. Indeed, under House Bill 480 the state Lottery Commission could license the operations in existing establishments. The owners of New Seabrook Park are already jockeying to get into position, convincing the town to schedule a vote permitting a sports betting venue at the next town meeting. Hampton selectmen are planning to follow suit at the request of Ocean Gaming at Hampton Beach. But the towns won’t vote until March, and already nine cities have agreed to hold votes in November, according to the Lottery Commission.

Still, the bill does seem to encourage setting up sports betting at existing charitable gaming facilities, said Rick Newman, a lobbyist for the NH Charitable Gaming Operators Association. But Newman said most people would wager via their smartphone, which is also allowed under the law.

Either way, sports betting might reverse the migration of some gaming dollars, since Massachusetts hasn’t passed such a law yet, and the apps will be designed to require the user be physically located in the Granite State.

Prospective vendors were supposed to submit their technical proposals on Sept. 20, and those deemed acceptable have to submit price bids by Oct. 10. The hope is that the Executive Council could approve the final contract shortly before Thanksgiving.

Sununu may have vetoed a lot of labor and energy bills, but his red pen didn’t touch any of the healthcare-related bills that made their way through the legislative process. Indeed, he signed 20 of them, including SB 4, which enshrines the once controversial Affordable Care Act into state law, and SB 290, which loosens some work requirements for recipients of expanded Medicaid and suspends them if lots of people are losing coverage.

Those measures preserve the status quo, but others made changes, including SB 226, which for the first time would regulate pharmacy benefit managers (PBMs). Although insurers use PBMs — the middle man between pharmaceutical manufacturers and pharmacies — to control costs, critics say they actually increase them.

“They are virtually unregulated,” said Newman, who also represents the Independent Pharmacy Association. “They make billions skimming money out of the health system. They rip off the consumer and rip off the pharmacist.”

The New Hampshire Medical Society is also happy. Numerous bills expanding mental health care and substance abuse services went through as well, including HB 508 which allows doctors to set up a monthly payment plan directly with patients to cover unlimited primary care access. The direct primary care bill adds some consumer protections and makes it clear that it is not insurance.

“I expect you will see it grow in the state,” said Dr. James Potter, the society’s executive vice president. “Those who have it love it. You can text your doctor all hours of the day.”

SB 258 would allow Medicaid managed care to pay for telemedicine services and help standardize the definition for private insurers, greatly enhancing its use. Potter said he expects a big increase in telepsychiatry as well as drug counseling.

And SB 279 would require health insurers to reimburse fertility treatment clinics which had been closing up shop, but now are coming back. “I think this will help those seeking treatment from having to go out of state,” Potter said.

Sununu vetoed a lot of renewable energy bills, but also signed a few.

SB 286 — the community power bill — makes it possible for municipalities and counties to create their own energy districts, allowing residents and businesses to opt out, as opposed to getting them to opt in.

“That’s important to a lot of towns to leverage buying power,” said Cathy Corkery, director of the New Hampshire Chapter of the Sierra Club. “It will make a big impact on how they will control their electric bills.”

The city of Lebanon has been working with Liberty Utilities to develop such a product, which would not only contract with energy suppliers — say a solar farm or a landfill gas-to-energy power plant — “but you also sell energy to your next-door neighbor” using blockchain technology to figure out who pays for what, explained Tad Montgomery, the city’s energy and facilities manager.

“This creates the possibility to totally scale up renewable energy,” said Dan Weeks, director of market development for ReVision Energy.

SB 165, the Low-income Community Solar Energy Act, requires that utilities set up renewable energy net metering projects with a favorable rate. Eversource was already setting one up (without the favorable rate) in response to a Public Utilities Commission order, part of a 2017 agreement between renewable energy advocates and utilities to set up an acceptable net metering rate. Eversource is proposing up to 20 megawatts in generation projects, none larger than five megawatts. It doesn’t have a location yet and the PUC hasn’t scheduled a hearing until next year.

“They were all mandated to do these pilots last December. Obviously, we are not there,” said Madeleine Mineau, executive director of Clean Energy NH.

The new law — for which the PUC has yet to set up rules — might delay things even more.

SB 165 could also be used for non-low-income net premium projects — even though they would not be eligible for the favorable rates — because it streamlines large group net metering, Weeks noted, which he said can be “clunky.”

Finally, HB 464 allows towns to extend solar energy exemptions for electric energy storage systems. This will be helpful for owners of residences who are using storage mainly as backup generation, said Weeks. But storage is still not economical for commercial clients that want to use it to smooth out demand curves. Local storage tax breaks would only help in marginal cases until the price of storage comes down.

The construction industry also got some of what it wanted. Homebuilders got an updated energy code, with only a modest tightening of energy standards, and a bill that would also set up a centralized, accessible list of local codes. And developers got a bill that would exempt sales of some low-income housing projects from the real estate transfer tax.

The governor also signed off on a bill that would require new commercial construction to include a larger universal changing station for the disabled in family restrooms.

But labor mainly got bills that were vetoed, with one exception: SB 197, would outlaw noncompete agreements for lower-wage workers. Labor advocates complain that such agreements — once used for executives and specialists — have been working their way down the pay scale to some retail and restaurant workers, restricting the free movement of labor and suppressing wages.

There were a few bills that focused on the labor shortage. SB 12 created the Graduate Retention Incentive Partnership, which would point job seekers to employers that would pay off their student loans.

Paragon Digital, a Keene marketing firm, already has set up a program because it expects to grow its workforce from 12 to 30 employees in the next five years. “Young workers are pretty important to our success,” said owner Zach Luse.

But the bill doesn’t provide any money to set up GRIP. It just instructs the Department of Business and Economic Affairs to promote the program to attract employees.

“I would expect that we will have the program ready to go live by the end of the year, if not earlier,” said BEA Commissioner Taylor Caswell.

But SB 276 would allocate $500,000 to develop career readiness credentials program for high school students starting in 10th grade. The state Department of Education plans to set up a council to implement that law, which probably won’t go into effect until next September, said Grant Bosse, a department spokesperson.

The language of that bill is in the vetoed budget, he noted, so it might survive in a budget compromise.

*Bill went into law without signature