Before its shutdown, 40% of NH firms got PPP loans 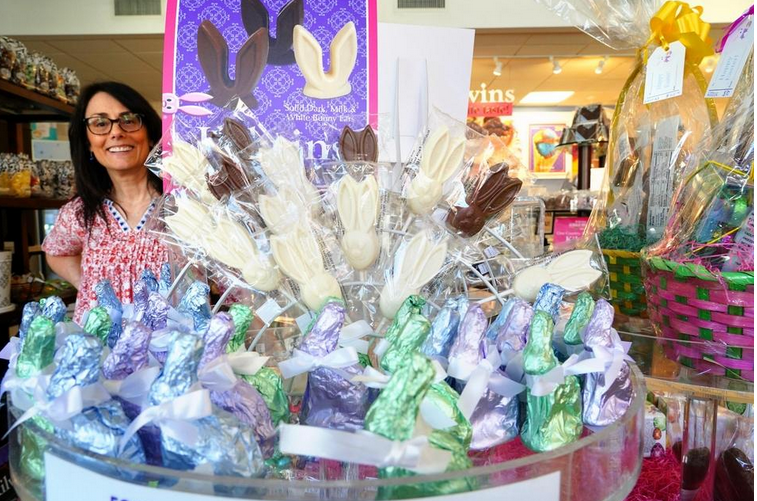 Federal assistance programs have left Janette Desmond, owner of Kilwins in Portsmouth, perplexed. She received a $10,000 grant advance on a SBA loan only to later be denied the actual loan.

When the federal Payroll Protection Program essentially ran out of money on the morning of April 16, ending the $349 billion forgivable loan program in less than two weeks, it was a bit like musical chairs: Would your business be one of the 1.6 million to get their loan approved before the music stopped?

Bedford-based Great NH Restaurants got 10 approvals, for each of its various T-Bones, CJ’s Western Grill and Copper Door restaurants. The money landed in its bank account the day after Easter.

Yankee Publishing Inc. in Dublin — parent company of NH Business Review — got a $1.25 million loan approved, but at deadline has yet to see a penny.

Kilwins, a sweets shop in downtown Portsmouth, hasn’t heard a thing, even though the owner, Jannette Desmond, applied twice for assistance.

“It’s all a mystery to me,” Desmond told the NH Business Review on April 17.

In the end, nearly 40% of New Hampshire businesses got or will get a loan, which, if they spend it on their workforce and other necessities, would turn into a grant. That’s a much higher percentage than most states, and much higher than the country as a whole.

The Paycheck Protection Program, which caused a massive rush on local banks, ended almost as suddenly as it started.

Joe Bator, executive vice president at Primary Bank, learned of its demise at 10:20 on the morning of April 16 when a message popped up on his screen while he was working on a handful of last-minute loans.

“People who came into us this morning, they just ran out of time,” he sighed.

The loan program was supposed to last until the end of the year. Indeed, some members of Congress originally worried that businesses wouldn’t hear about it and take advantage of it. Instead, banks were swamped.

There is bipartisan support to replenish the program, but there isn’t bipartisan agreement on much else. Republicans want to pump another $250 billion into the PPP. Democrats want more than that, plus other money for localities and hospitals. There is also an effort to make the future loans easier to get and provide more flexibility on when to bring workers back.

The PPP was Congress’ attempt to stop the hemorrhaging of jobs as a result of the coronavirus crisis and emergency orders in most states that shut down all but essential businesses.

Here is how it works.

A “small” business with under 500 employees can “borrow” 2 1/2 times its average monthly payroll (which includes benefits but is limited to salaries of no more than $100,000) up to $10 million for two years at a 1% interest rate, with no payments due for the first six months. But most or all of that will be forgiven as long as at least three-quarters of the money goes to pay an equivalent workforce (in terms of headcount, pay rate, hours and benefits) for eight weeks. If some of the workforce is cut, then the forgiveness amount will suffer the same fate proportionately.

The other quarter of the loan can also be forgiven if spent on necessary expenses like rent, mortgage payments or utilities.

But first a business has to find a bank, and it better be a bank you have an account with, or you will be pushed to the back of the line.

The strong demand in New Hampshire indicated the strong need. And New Hampshire seemed to be hit hard in this recession. The state — which is dealing with nearly 125,000 in initial unemployment claims filed in less than a month — led the nation with a 6,429.42% increase in claims in April, compared to before the crisis started in the middle of March, according to a recent report by WalletHub. And the state appears to have gotten its fair share of the PPP, according to SBA data released April 17, the day after the program ended.

The local SBA office approved some 11,682 loans to New Hampshire companies, totaling $2 billion, for an average disbursement of $173,274.

That represents 39.3% of small businesses in the state, based on 2017 census data, ranking it 17th, and far better than the national percentage of 29.8%.

At the top, percentage-wise, were Nebraska (58.2%), North Dakota, South Dakota, Oklahoma, Iowa and Kansas. In terms of New England, New Hampshire is behind Maine and Vermont, but ahead of Massachusetts. California is at the bottom of the list, with less than 15% receiving loans. New York and New Jersey — the epicenter of the pandemic — ranked third and fourth from the bottom, with approval rates of under 18% each.

New Hampshire measures even better when it comes to the size of loan per employee. In other words, if the loan total were spread out over every worker in a business, it would come out to a little over $6,676 per employee, ranking New Hampshire eighth nationally. The nationwide average is about $1,000 lower.

“The states that do best have more community bankers on the ground who know their customers,” said Bator. “We were able to mobilize our resources to do a year’s worth of business in a few weeks. Larger institutions that are going to run a program though a web platform are going to lose people.”

Before the program closed, the SBA approved 393 of Primary’s forgivable loans for $98.7 million — 10 times the number of SBA loans the bank handled all year.

Tom Boucher, an owner and CEO of Great NH Restaurants, was one of the borrowers.

His applications were in on Friday April 3, and were approved by the end of that weekend. On Tuesday, he was able to start hiring 100 of his 250 full-time workers back, as the chain added more labor-intensive curbside pickup, while others boned up on training.

“This was a lifesaver,” he said. “This is going to save my business.”

But although this was enough to get him through eight weeks, he and other restaurants are going to need even more help in May when the money runs out.

“You are going to see restaurants that are not going to make it,” he said.

Boucher’s business got its money fairly quickly, and he expects most of it to be forgiven. But it doesn’t always work that way.

Take Yankee Publishing. Despite an expected decline in revenue, it is still paying its employees to work remotely. So it applied for a $1.25 million loan based on its payroll size. That part will be forgiven. But the company doesn’t anticipate needing the rest for other expenses, so it will probably have to return between $100,000 to $200,000.

Still, “this is essentially a grant program in the form of a loan,” said YPI CEO Jamie Trowbridge. “There is no pain involved here in having to pay some of it back.”

But there is some anxiety. Like many of those who got loan approvals, Trowbridge had yet to see the money in his bank account on April 17.

“The delay is a little disconcerting,” he said.

Desmond, of Kilwins, is worried too. She had to redo her application, since her bank ended up switching its third-party vendor. But she hadn’t heard from the new one either.

“It is very frustrating,” she said.

In addition, post-Easter, she won’t have much of a staff to retain for those eight weeks if the money comes through. “I’ll have to pay them to stay home.” She could use the money later, “when we get to the new normal — whatever that is.”

But she did get approved for another emergency SBA loan program — an Economic Injury Disaster Loan, which is given by the agency itself, not via a bank. That loan, capped at $2 million, is for 30 years at a 3.75% interest rate.

She also had to apply twice, since Congress changed the application process to throw in a $10,000 advance that she wouldn’t have to pay back. She received the grant, which left her bank account immediately to pay the rent, but the loan — “which was much bigger than I expected,” she said — ended up being denied without explanation.

“I can’t believe they gave me an advance on a loan and then denied the loan. The government is so messed up right now and it’s really messing with my business,” Desmond texted on Saturday, April 18. “Won‘t be sleeping well tonight.”

The EIDL program also has run out of money, though there is a deal in the works to pump in another $50 billion.

The final push to take advantage of the PPP program came from sole proprietors, who were not allowed to submit applications on April 10, leaving them less than a week before the program ran out of money. Banks found the processing of such loans more difficult because they usually needed a Taxpayer Identification Number. Many self-employed individuals use their Social Security and may not have their books in order.

But Swift Corwin, the owner of Corwin and Calhoun Forestry, a consulting company in Peterborough was able to get his through in time.

Corwin is dependent on the “winds of the economy,” which are not blowing his way these days. Yes, he said, toilet paper is made out of wood, but so are houses, and construction has taken a hit and the market is “soft” and he expects it to get softer. But Corwin doesn’t want to collect unemployment — a new option suddenly for the self-employed — even though the enhanced benefits might result in a larger income than he gets for his business.